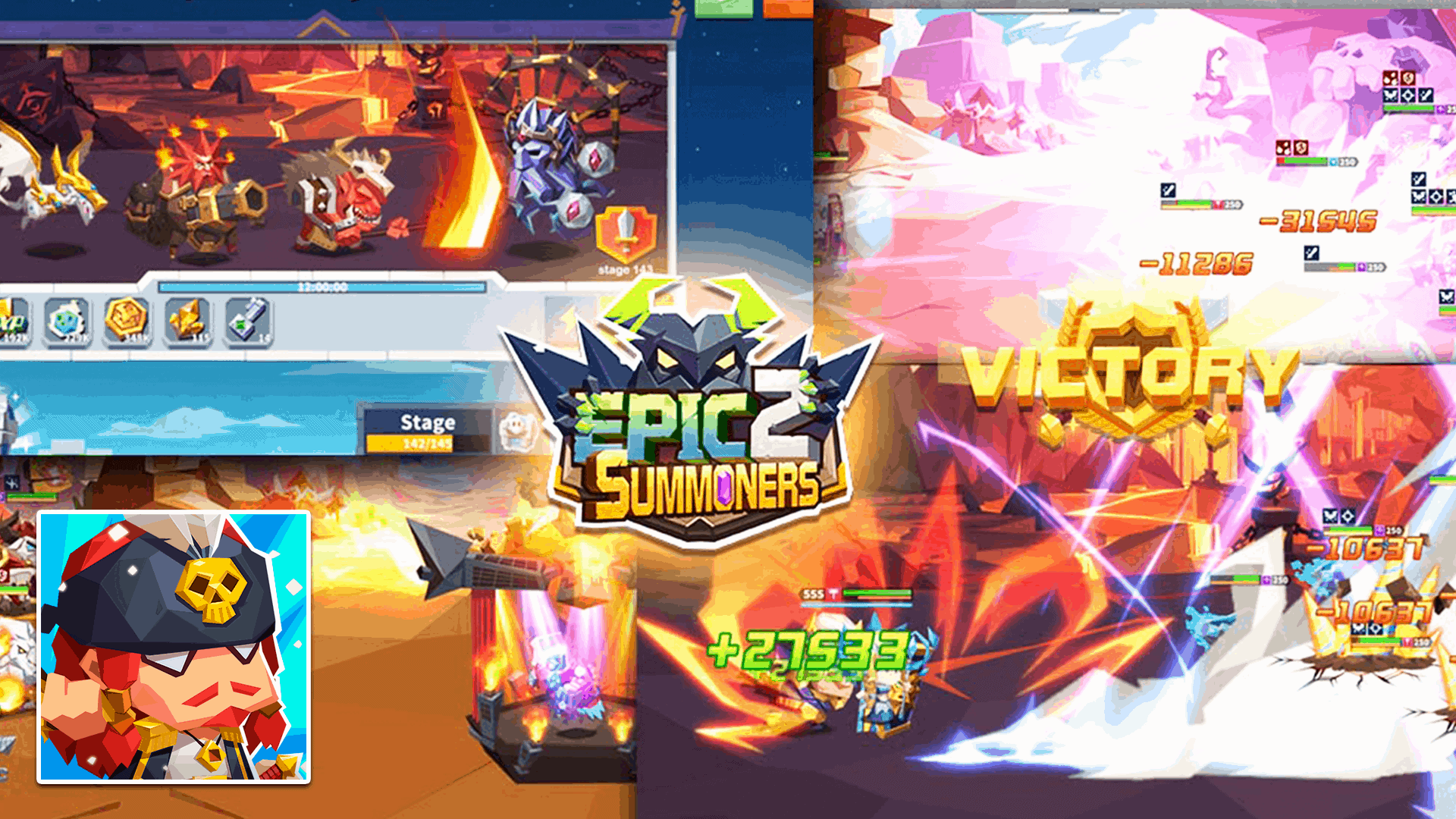 In the game, you collect heroes, assemble and upgrade your very own team and bring it to battle.

There are more than 50 unique heroes in the game, all with unique abilities and playstyle.

Epic Summoners 2 is available on Android through Google Play.

To help players of Epic Summoners 2, we’ve put together this guide teaching you the basics of the game, as well as tips and tricks on how to become a better player.

Epic Summoners 2 is a complex game with lots of features and objectives. Therefore, many get overwhelmed when stepping into the game for the first time.

This guide will help you quickly get a grasp of the game and its main features.

In Epic Summoners 2, the main objective is to progress through the campaign by beating levels of enemies.

You’ll find the campaign inside the Adventure Gate located on the main screen.

To challenge a stage, press the sword icon on the right-hand side right above the stage number.

Before entering battle, you have to assemble a team with your collection of heroes.

You can have a total of 5 heroes in battle at once with the following composition: three heroes on the backline, two heroes in the middle, and one hero in front.

When you’re in battle, all heroes, including the enemies, automatically attack each other in order depending on who has the most speed.

Once all heroes have attacked, the cycle starts over again.

Heroes have two attacks, a basic attack, and a special attack.

Basic attacking enemies charge up a hero’s special attack. When a hero has charged up their special attack, they use it on their next turn.

Assembling and upgrading your team is a major part of any hero collector like Epic Summoners.

There are several ways to earn rewards that help you upgrade your heroes and summon new ones such as beating levels, completing missions, and collecting idle rewards.

If you’re stuck on a level in the campaign, look for other things to do in the game, such as the Dragon Tower, Guild Dungeons or the Expedition.

All of these will help you progress by allowing you to earn resources that you can use to upgrade your team.

Not only is getting new heroes in Epic Summoners 2 an exciting part of the game, but it is also a great way to improve your team’s power.

By replacing a hero that generally isn’t performing well, you can significantly increase your chances of winning in battle.

Though not always the case, 5-star heroes are, in most cases, better than those with worse star ratings.

It is, therefore, much rarer to get a 5-star hero than those of a lower star rank.

Even if you don’t get a hero you believe can replace someone on your team, it can still be of great value as you can dismantle heroes you don’t need, and in some cases, use them to ascend other heroes.

The main way to acquire new heroes in the game is through a random summoning feature, known as the Magic Code.

In the Magic Code, you can exchange keys or gems for random heroes.

There are three types of summons, the first of which requires you to have silver keys, the second gold keys, and the third gems:

There are also other ways to get new heroes in the game, such as buying fragments from shops, opening progress chests, and participating in events.

If you are looking for a specific hero, try to use one of these methods as they often let you choose/buy the hero you want.

Most of the heroes you’ll be acquiring throughout the game, will, however, come from the three types of summons in the Magic Code.

Be sure to claim all rewards the game throws at you on a daily basis.

Especially at the beginning of your journey, there are lots of rewards to collect.

Here are some of the most important rewards to collect:

Idling will be your main source of EXP and other resources used for upgrading your team throughout the game.

You can hold a total of 12 hours worth of idle rewards at a time, so go claim them at least every 12 hours to maximize your earnings.

You should fill up your friend list as soon as possible.

Every single day, you can send friendship points to all your friends, and they can send them to you.

Once you reach level 50, you unlock the friend boss, which you can challenge by spending friendship points.

You can use three of your own heroes and six of your friends’ heroes to challenge the friend boss.

After fighting the boss, you get a chest that contains a number of silver and golden keys depending on the amount of damage you deal to the boss.

On a single run against the friend boss, we got 13 golden keys and 12 silver keys, and it only costs 20 friendship points to challenge it.

Therefore, you should fill up your friend list as soon as possible so you can start farming keys.

To get more friends in Epic Summoners 2, you can go to the world chat and add anyone there, or simply write add me.

Chances are a lot of people will accept your request or add you.

You can also go to the friends tab on the left side of the main screen, tap the Find tab, and add everyone who is suggested there.

Even if you aren’t level 50 yet, go ahead and fill up your friend list, as you can stock up on friendship points and then use them once you get to level 50.

At times, you’ll find yourself stuck at a particular level in the campaign.

When you do, look for other content where you can farm resources to upgrade your team.

The most important of these is the Expedition.

The Expedition is similar to labyrinths in other idle RPG games, where you advance through a maze by beating platforms of enemies.

Be sure to challenge the Expedition before it resets to maximize your rewards.

To access the Expedition, press the Party balloon in the top right corner of the main screen and press Expedition.

Inside, you can move to a platform adjacent to the one you are currently on, so plan your route.

You will earn rewards from each platform you defeat, but a ton more from the final level of each stage.

The Dragon Tower is a series of floors, each with a team on it protecting that floor.

Each floor becomes increasingly more difficult, so just do as many as you can until you get stuck at a floor.

Once you’ve upgraded your team enough, come back and catch up on the floors you now can defeat.

Another great building in the game is the Magic Cube.

Here you can challenge bosses and earn rewards based on the amount of damage you deal.

Rewards from the Magic Cube include hero fragments, gems, gold, and other resources for forging, etc.

To keep up with the increasing difficulty of enemies in Epic Summoners 2, you need to upgrade your heroes.

There several ways to do so, including leveling up, tier up, ascending, equipping gear, and upgrading gear.

Different resources are required for each of these methods, which is why you might want to consider how you upgrade a hero.

If you don’t plan on using a particular hero in the long run, you shouldn’t spend tier tokens on it, as they are much harder to by than gold and spirit.

You can tier up a hero you don’t need later a couple of times if you really need to, but in the later tiers, it becomes very costly to do so.

Therefore, we recommend not tiering up heroes more than three times if you don’t need them in the long run.

Gear can be unequipped and given to another hero, so go ahead and upgrade those as much as you want and give it to whoever, you can always give it to someone else.

When dismantling a hero, you get around 80% of the gold and spirit you’ve spent on it back, but much less tier up tokens.

Because of this, you can also, within reason, throw a ton of gold and spirit into heroes you don’t need for later so that you can progress faster now.

It’s a great idea to follow progress missions and quests in general.

In the top right corner of the main screen, you can always find a mission asking you to do something.

Following these missions will ensure you get on the right track, and will help you immensely because of the rewards you receive upon completing them.

Rewards from clearing progress missions include everything from keys to arena badges.

Quests are another great way to get your hands on some great rewards such as gems, fire crystal, and keys.

You can find all your quests in the bottom right corner of the main screen under the quests tab.

Joining a guild comes with many benefits such as boosts, and of course, access to the guild dungeons and guild shop.

The guild dungeons are a series of special battles you can access when in a guild.

The number of battles you can do inside the guild dungeon depends on the progress your guild has made here.

Like the Expedition, the guild dungeon resets after a while.

Completing battles in the guild dungeon gives you rewards, including guild coins, which you can spend at the guild shop.

The guild store is located under the third tab inside the shop.

To access it, click the green shop owner on the left side of the main screen and press the icon with a tower on it on the right side.

You can purchase many great things, including random hero fragments.

The guild shop resets after a couple of days, so you don’t have to spend your guild coins on something you don’t need if you run out of fragments to buy – just wait for the guild shop to reset instead.

Test your skill in the Arena

When you’ve built up a great team, you can test it out against other players of the game in the Arena.

The Arena is the PvP system in Epic Summoners 2, which has a ranking system so you can see how you rank up against all other players.

Battling it out against other players is not only a fun experience but also gives you some great rewards.

Therefore, we recommend you do all your free arena runs whenever you can.

You can get a lot of great 5-star heroes from the arena shop, which deals in arena coins.

To get more arena coins, all you have to do is fight in the arena.

With all these tips and tricks presented in this guide, you are now ready to take on Epic Summoners 2 and become a great summoner.

If you have any tips or tricks you believe should be in this guide, you can share them with us in the comment section below.