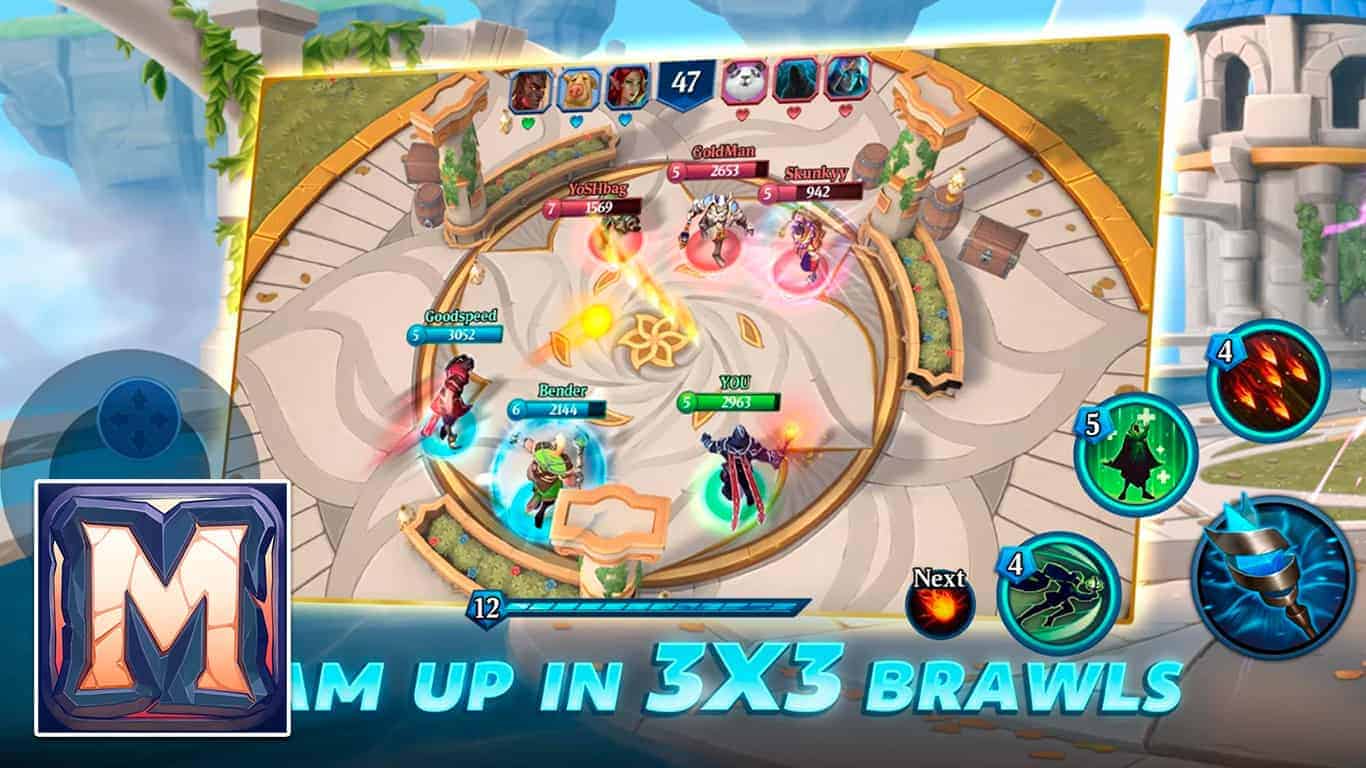 When you start a game, you are put into an arena with many other mages with the objective to be the last one standing.

After a little while, a storm will appear around the arena that slowly closes in on the entire map.

If you walk into the storm or get pushed out there, you take a lot of damage per second.

Manastorm: Arena of Legends is made by MyTona and is available on Google Play.

Because of the number of unique spells in the game, the storm, the real-time PvP aspect, and more, there are a lot of strategies to run and things to consider.

Your main goal is to be the last one standing in the arena.

To do that, you have to play smart, take advantage of different objectives on the map, and know when to lay low for a bit.

In this guide, we give tips and tricks on how to become a better wizard in the game of Manastorm: Arena of Legends.

You have two ways to deal damage to opponents in Manastorm: Arena of Legends.

The first one is with your basic attack, which is a melee attack that deals around 20 damage.

It might not seem like a lot, but it’s very useful in many situations, especially when you’re chasing someone while waiting for mana.

The second, and main way to deal damage in the game, is by casting spells.

You always have three spells ready, but as soon as you cast one of those spells, the spell you just cast will be replaced with another from your deck.

This phenomenon is known as spell rotation, where the spells you can cast constantly changes.

Furthermore, you have to have enough mana to cast a spell.

You can see on its icon the amount of mana it requires, and you can see how much mana you have on the middle bar below your character.

At all times, you regen mana, but you can also pick up mana globes to recharge faster.

When casting most spells in Manastorm: Arena of Legends, you have to aim them yourself.

You do this by dragging your finger from the spell icon and outwards in the direction you wish to cast the spell, relative to where your character is.

If you just tap a spell that is a skillshot, it will just cast it in the direction of the nearest enemy.

However, if you aren’t almost on top of the enemy, auto-cast is often a poor choice.

You have to try and predict where the enemy is going and set your aim based on that.

Most spells in the game push people back, which you have to take advantage of.

The best way to deal a lot of damage to an enemy is by pushing them into the storm.

Therefore, you should always think about how you can get someone into the storm, and of course, avoid you being pushed into the storm.

How to get new spells

The main way to get new spells in Manastorm: Arena of Legends, is by opening tomes.

You get tomes by playing matches and collecting keys, by completing quests, or through the shop.

To open spell tomes and thereby get new spells, you have to study them, which takes time.

The most common spell tome takes three hours to open, but you can speed that up with gems.

Some spell tomes that you can acquire through quests, open instantly.

You can also get new spells by purchasing from the shop, which sells spell cards for gold through daily deals.

You just need a single spell card in order to use that spell in your card deck.

You can then see how many additional cards you need to upgrade it further.

Another way to get new spells is by opening the daily royal tome.

To open the royal tome, you have to collect 10 amulets, which you get from playing matches.

You can find the royal tome on the main lobby screen in the bottom right corner right next to the quests icon.

The royal tome also opens instantly and contains a bunch of great rewards, including spell cards.

Strategy to get runes

In the middle of the arena, runes spawn every now and then.

To get the rune and thereby its buff, you need to be the only one standing in its area until it reaches its full charge.

A rune is charging up while only a single person is standing within its area.

However, you do not personally need to be the one charging the entire rune up.

You simply need to be the only one standing in the area right before it finishes charging.

In most cases, it’s a lot better not to be the one charging it up as you become an easy target.

Instead, wait outside the area while another player charges it up, and right before it finishes, rush in with an AoE knock spell that pushes everyone out of the area.

Using this method, you are sure to get a lot more runes than trying to charge the entire thing yourself.

There are three different runes, rune of vitality, rune of magic, and rune of mana.

Rune of vitality heals you a significant amount over its buff duration, rune of magic charges up your mana, and rune of magic increases your magic power.

You can tell which rune it is by its color.

Rune of magic is purple, rune of mana is blue, and rune of vitality is green.

The most useful of these three is rune of magic, then rune of vitality.

A high damage spell like meteor can deal more than half of a player’s health if you use it while rune of magic is active.

Having the right balance of spells in your card deck is crucial when it comes to your chances of winning a match.

Of course, the balance of your spells does heavily depend on your playstyle and what you prefer, but there are a couple of things we believe everyone can benefit from considering.

The five things to keep in mind when creating your card deck, are the balance of damage, push, mana cost, mobility, and crowd control.

Firstly, you need to have enough damage to chip down the enemies’ health.

Furthermore, you need to have a couple of spells that pushes enemies to take advantage of the storm properly.

Mana cost is also very important, as if you have too many spells with too high mana costs, you will be running around constantly waiting for your spells to charge up.

We also believe you should have at least one spell in your deck that gives you mobility, such as rush or charge.

Having a mobility spell helps you get out of tough situations, or get back onto the arena when pushed into the storm.

Lastly, having at least one crowd control spell helps you set up combos or keep enemies in the storm, which has been the deciding factor in many of our games.

To keep up with other players as you rank up in the game, you have to upgrade your spells.

You can see how many levels you need spell cards you need of a specific spell to upgrade it to the next level inside your card collection.

Once you’ve gathered enough cards of a specific spell to upgrade it, tap it inside the collection tab, and press upgrade.

Upgrading spells cost coins that you get from playing games, opening tomes, and completing quests.

The cost of upgrading spells increases as their level increases but also depends on the rarity of the spell.

As mentioned earlier, you can get more spell cards by opening tomes and buying cards directly from the daily shop offers.

Besides upgrading your spells, you should also level up your character as it increases its stats, including health.

To level up your character, you simply need to play the game, do quests, upgrade your spells, etc.

Every little edge you have over the other players increases your chances of winning a game.

Something we’ve noticed that not a lot of players focus on in the arena is mana globes.

Mana globes are small blue globes that spawn on specific locations on each map, which gives you +1 mana when you walk into them.

Just one mana point might not seem like a lot, but it can be the difference between who can cast a spell first, and thereby take the victory.

Therefore, we recommend you always look out for mana globes and attempt to get them if you see any.

You shouldn’t, however, walk into a dangerous position just to get a mana globe, or walk out into the storm to get one.

But, when it’s safe, hover around areas with mana globes, and you’ll have way more mana throughout the game than the rest of the players.

Be sure to check the shop daily for great deals.

You can always buy spell tomes and gold in the shop by spending gems.

However, you can also purchase very useful items such as spell cards in the shop every day through the so-called daily deals.

Every single day, the shop presents a new set of deals that only cost gold.

If you find cards you might use that are cheap, go ahead and buy them.

Likewise, if you find cards of spell that you’ll certainly use, we recommend you buy them even if they are a little expensive.

Besides spell cards, daily deals can also be gems, and probably also cosmetics in the future.

Completing quests is another great way to get your hands on some extra resources, and of course, spells.

You can find all your current quests in the bottom right corner of the main lobby screen.

Quests themselves give gems, spell cards, and quest tokens as a reward.

Once you’ve gathered enough quest tokens on a given day, you can claim the Adept Tome, which gives a lot of spell cards and coins.

Be sure to take advantage of these quests as they definitely are worthwhile to do.

Many of the quests are easy to complete as they mostly ask you to do some tasks related to playing games or interact with other players.

You are now ready to become the greatest wizard in Manastorm: Arena of Legends!

With these tips and tricks, you are sure to have a higher chance of being the last player standing.

If you have any other tips and tricks, you believe other players should know, you can share them with us in the comment section below.