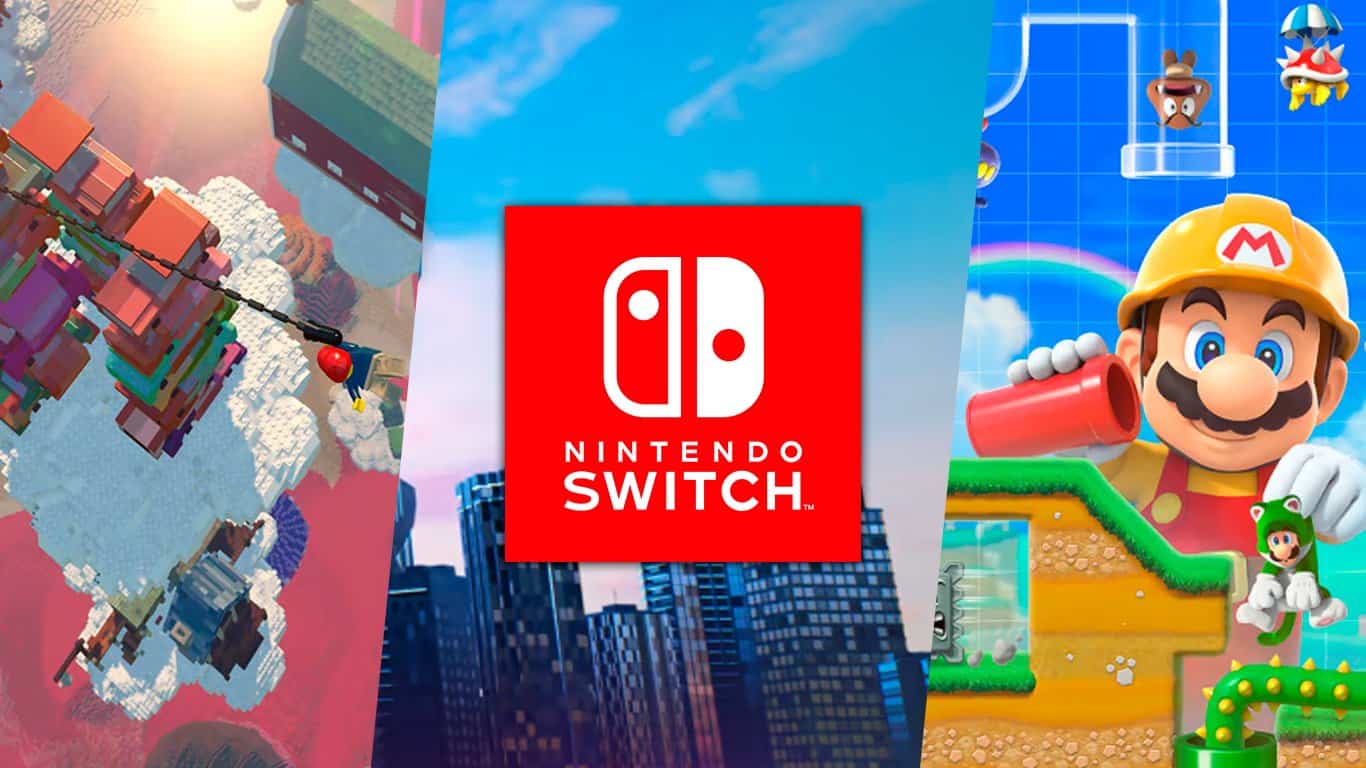 Building games have always piqued many players’ interest, as you get to express your creativity and create something magnificent.

Learning how to build things from scratch is not only a life skill worth cultivating, but it also happens to be a lot of fun!

Though building games all share the same concept, building, they come in many different genres.

Whether you want to rule with an iron fist, craft strategic solutions, or simply have some good, old-fashioned fun with your imagination, there is a title for you.

In this guide, we feature some of the best building games that the Nintendo Switch has to offer.

When it comes to building things, the first name that comes to mind for most people is Lego.

The two-player game, Lego Worlds, takes things to a whole new level that is intriguing yet not overcomplicated.

Players of any age can enjoy building things without having to spend hours learning the mechanics of the game.

It’s a breath of fresh air, really, and sure to bring enjoyment to anyone with a passion for creating things.

In Lego Worlds, you start off as a Lego astronaut who has crashed their ship onto a mysterious planet made out of Legos!

Your astronaut must become a master builder if they wish to escape this mysterious world, and this is going to require you to complete quests for the various NPCs that you meet to get golden bricks that can help you refuel and rebuild your spaceship.

One of the best parts of the game is the variety of adventures that you can get yourself into.

There are castles out there, pirate adventures, and even prehistoric levels that will have players longing for the next journey.

Lego Worlds will keep all ages, including children, creatively occupied for hours on end, as well as tingle their adventurous senses.

Give Lego Worlds a try, and you’ll get to experience the fun and challenges that lie ahead of you!

For those of you who like your building a little more on the serious side, why not lead a band of Vikings to victory in Northgard?

Northgard is a real-time strategy game that is playable by up to 6 players, and if you like a good story to go with your game, you won’t be disappointed.

You start the story off by playing a Viking named Rig, who is on a quest to avenge his fallen father, who died at the hands of a rival clan to prevent his family from settling in Northgard.

Rig is going to need help to do this, and so you must build up villages and your own viking hordes.

While the mechanics seem familiar, Northgard has elements that give it a flavor of its own. You can train some of your villages to be scouts, for instance, to find new and rich areas to settle.

You must effectively delegate tasks to leaders, each with unique strengths and weaknesses.

If you keep your Vikings in good food and plenty of mead (yes, it’s there!), then your power will grow.

Do you have what it takes to help Rig get his revenge? Try out Northgard and see for yourself!

They say that the Mob built Las Vegas, but have you ever wondered what kind of city you could build? Cities: Skylines gives you a chance to do exactly that, and it’s surprisingly addictive.

This one-player building game has a simple premise. Build a city that stands the test of time.

It’s much harder than you might think. After all, you’re starting from scratch, so you need to build everything from roads and sewage to attractions that draw people to your city.

So, what happens if a building catches fire? Do you have a fire department yet? What about getting everyone electricity?

You’re also going to have to enact rules. It’s a huge sandbox you are working with, and you are going to learn a lot about how a city really runs while you are facing the unique challenges of building one.

Cities: Skylines is a game for serious builders, and the challenges evolve with your progress, so they will keep you on your toes.

By the time you’ve started erecting skyscrapers and efficient public transportation, you’re still going to have to strategize at a higher level than you might have considered.

Try it out for a spell and see if you can build a new and modern Rome. Just keep your focus – it’s harder than you’d think!

Minecraft on the Nintendo Switch supports up to 8 players online, and we have to say, it’s good to be back.

The sandbox classic Minecraft looks amazing on the Switch, and since it’s Nintendo, expect Mario skins that you can’t get anywhere else.

Play in survival mode to craft everything from scratch while attempting to survive, or if you feel like building whatever your heart desires, go with Creative mode and the unlimited resources that come with this game mode.

Even players of Minecraft who are used to other consoles should consider the Switch release, as it takes everything that you love and makes it supremely portable.

So, whether you are a new player looking to get into this classic king of building games or are a veteran Minecraft player looking to revisit one of your favorite places, the Nintendo Switch version of Minecraft is always a sure building-game choice.

The original Animal Crossing provided longtime enjoyment and relaxation, which earned the game a lot of fans quickly, and we’re happy to report that ‘New Horizons’ for the Switch is a worthy successor.

It’s a game you can share, too, as up to 8 players are allowed to live on one island, and up to 4 can play at the same time.

Animal Crossing: New Horizons starts you off on a deserted island with two random animal buddies to help you get settled.

Instead of houses, you’ll be spending time in tents, and often you’ll find that you are quite capable of crafting what you need instead of simply buying it.

Rather than being shipwrecked, you are actually a customer of a ‘Deserted Island Getaway’ courtesy of Tom Nook.

Both he and his nephews are there to help you adjust to your new life on this island paradise.

So, look around for things to trade like shells or bugs, and if you find a fossil, donate it and put it on display at the museum.

If you want some adorably animated fun that lets you build without pressuring you into a panic, then give Animal Crossing: New Horizons a try, and we think you’ll find that it’s a keeper!

The single-player classic amusement-park simulator is back, and it’s looking great on the Nintendo Switch.

Before you ask, yes, you CAN ride the coasters. The ‘Coastercam’ feature lets you do this so that you can take the occasional break from crafting amusements (or creating sly traps) for your constant stream of customers.

If you’ve never played this series before, the premise is to build your own amusement park and to populate it with rollercoasters and other attractions that draw in the masses.

Make more money with your park, and then start building the craziest rollercoasters you can imagine.

When you are starting off, there are some pre-built rollercoasters that’ll help you get your park off the ground while you learn the basics.

It’s fun and challenging to play, and hey, you can build and ride your own rollercoasters! Who doesn’t like that?

Check out RollerCoaster Tycoon 3 to build the amusement park of your dreams!

Just be careful building those rollercoasters on your own – you’re going to have to learn a few things if you want to make them safe!

When it’s got Mario’s name in it, you know that you are in for something good.

Super Mario Maker 2 is a treat for veteran Mario players and for those who like to build.

The appeal? Well, you can make your own 2d Mario levels from scratch, EXACTLY how you want them.

Level building is addictive, intuitive, and easy, so go crazy with it. You know you want to!

You can create courses for friends or team up with up to 4 other players to try to beat levels that you and your friends have created together.

Online multiplayer is also available, allowing you to share your creations with players around the world, try theirs, or team up with others to beat tough levels.

Pay a visit to this classic title in its new and improved format – you’re going to love Super Mario Maker 2.

With good-looking graphics and an intuitive UI, Tropico 6 is a building game on the Nintendo Switch that you’ll definitely want to play.

It’s also got politics! The basic premise of the game is that the unhappy people need a new and innovative leader to build and govern and guess what? That’s YOU.

It’s got a solid tutorial system so that you will know what you’re doing, and it even includes a sandbox simulation so that you can try all kinds of crazy things before you get started building and ruling in a proper fashion.

You can run these cities as ‘good’ or as ‘evil’ as you’d like.

If you have a hidden agenda of hiring a cheaper worker in a building, for instance, you can set up a ‘random workplace incident’ that happens to fit your goal.

It’s a city management simulator in the palm of your hand, and you can compete with up to four other players in multiplayer mode to see who’s best!

Whether your intentions are noble or insidious, you’re going to have a good time leading your people out of the revolutionary times into a glorious (and possibly quite seedy) future in Tropico 6!

Those are our picks for the best building games to play on the Nintendo Switch!

Know of any other great building games that you believe should be included in this list? Let us know in the comment section below.