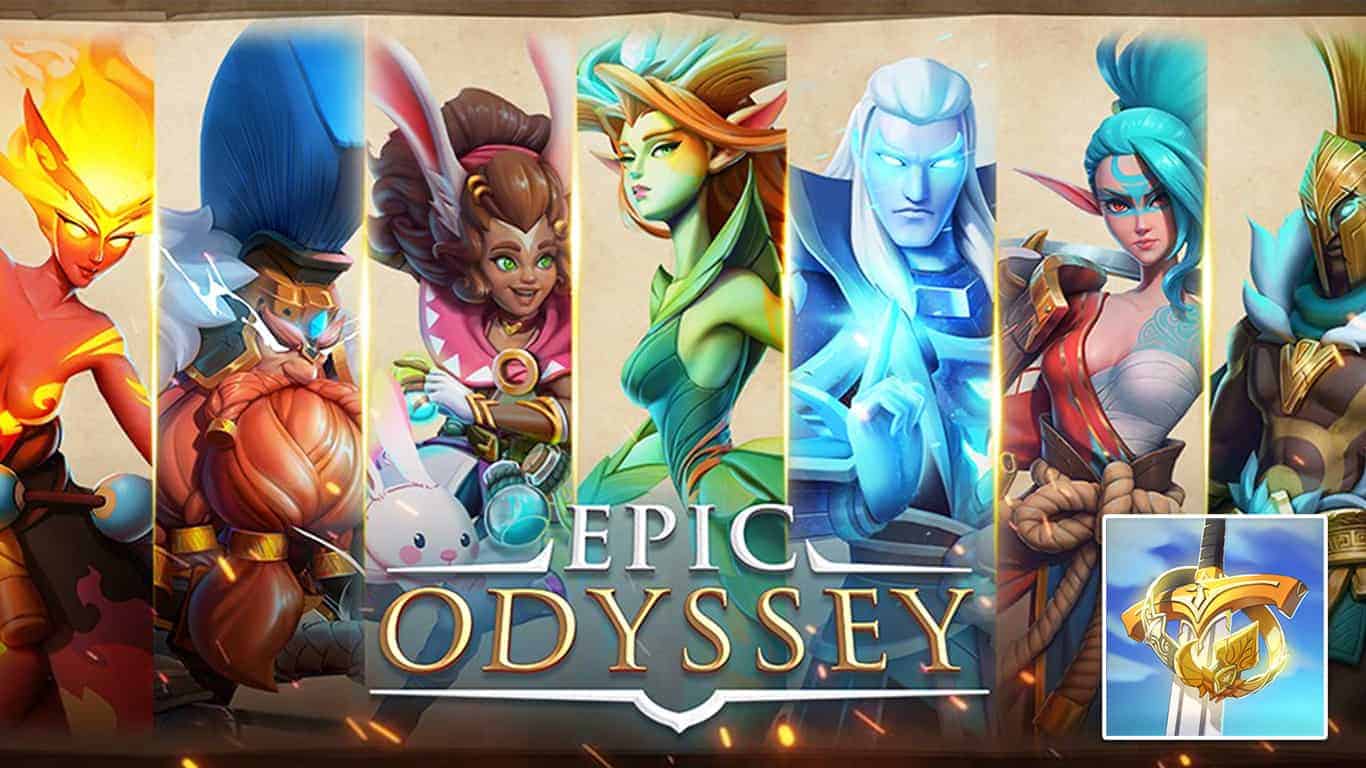 To succeed in the game, you have to collect heroes and build a powerful team.

You will not only be fighting enemies in Epic Odyssey, but you will also be taking on puzzles on maps, and more.

In this guide, we give you tips, tricks, and strategies to optimize your gameplay and thereby increase your chances of winning.

Epic Odyssey is created by Hiker Games and is available on Google Play.

In Epic Odyssey, you explore levels filled with enemies and objectives to overcome.

The game has a unique system in which you run around the selected map in a Diablo-style view.

Upon running into an enemy standing in your way, you will start a fight with that enemy, which, in reality, is a team of enemies.

Once a battle begins, your team of heroes takes over with the in-battle fighting style is similar to that of other Idle RPG mobile games.

You choose the position of each hero on your team as well as which ones you wish to use, and they automatically attack the enemy team.

When a hero has charged enough energy for its special attack, it will automatically use it.

Your job is to obtain new heroes, upgrade them, and build the ultimate team so you can beat even the toughest of enemies.

Besides battling, players also face the challenge of having to complete the puzzles that are the maps themselves.

Obtaining more heroes in Epic Odyssey is essential for creating a great team.

Not only will you need a variety of heroes to build a powerful team, but you also want to have some of the best ones on your team.

As with most hero collector mobile games, many of the best heroes are rarer than most.

Therefore, you probably want to keep collecting more heroes throughout your journey to continuously optimize your team.

The main way to get heroes in Epic Odyssey is to summon them in the Summoning Gate.

To summon heroes, you need summoning scrolls that can be obtained through quests, rewards, events, and more.

You can also summon heroes by spending gems or friendship points.

Other ways to get more heroes in the game include collecting Spirit Summoning Pieces and through regular gameplay rewards.

As enemies get stronger and stronger through the game, you have to keep upgrading and ascending your heroes.

There are several ways to increase the power of your heroes, and you should take advantage of them all.

The first type of upgrade you’ll be introduced to is leveling up.

To level up a hero, go to the ‘Heroes’ tab, the crown icon, in the bottom menu, select a hero, and click level up.

Leveling up heroes increases their stats and gives them new skills at certain levels.

Once you’ve unlocked all skills of a hero, leveling them up further will level up their skills at certain levels.

To further increase the stats of your heroes, you can ascend them at the Temple.

Ascending a hero requires a sacrifice, depending on what tier the hero you wish to ascend is.

You can see the specific sacrifice requirement for a hero by selecting it in the alter and looking at the slot right next to it on the left side.

Lastly, you can increase the power of your heroes by equipping gear.

To equip gear, open the heroes tab, select a hero, and click the auto equip button or click an equip slot and choose an item.

You can also enhance equipment to further increase their stat boosts by selecting it in your inventory or inside the heroes tab and clicking ‘Enhance’.

Having the right team composition can help you beat tough levels in Epic Odyssey.

From our experience, having two tanks, one support, and three attacker heroes works well.

Race and class are other factors you should keep in mind when creating your team.

All heroes in the game belong to one race and are of one class.

If your team meets race and class requirements, your entire team gets a useful buff in battle.

Here is an overview of the different faction buffs you can get.

If you can meet one or two of these buffs, your team will be much stronger.

What buffs are the best depends on the team you are running.

Generally, however, the ATK buff and the Cooldown Reduce buff are quite good.

Like some other RPG mobile games, your team in Epic Odyssey automatically farms resources for you even when you aren’t playing.

All you have to do to get these resources is to claim them at the Sanctuary by clicking the pile of treasures with the text ‘AFK Duration’ on it.

You can earn up to 12 hours worth of resources at a time, so be sure to come back and claim them once in a while.

Another feature you should take advantage of is quests, which you unlock after completing chapter 3.

Quests not only give various useful rewards, but they also ensure that you don’t miss out on vital content and keep you on the right track.

Other rewards you can claim in Epic Odyssey include the God of Time feature located on the right side of the screen, daily login events, friendship high-five points.

With all these tips and tricks, you’re hopefully better suited for tough levels in Epic Odyssey!