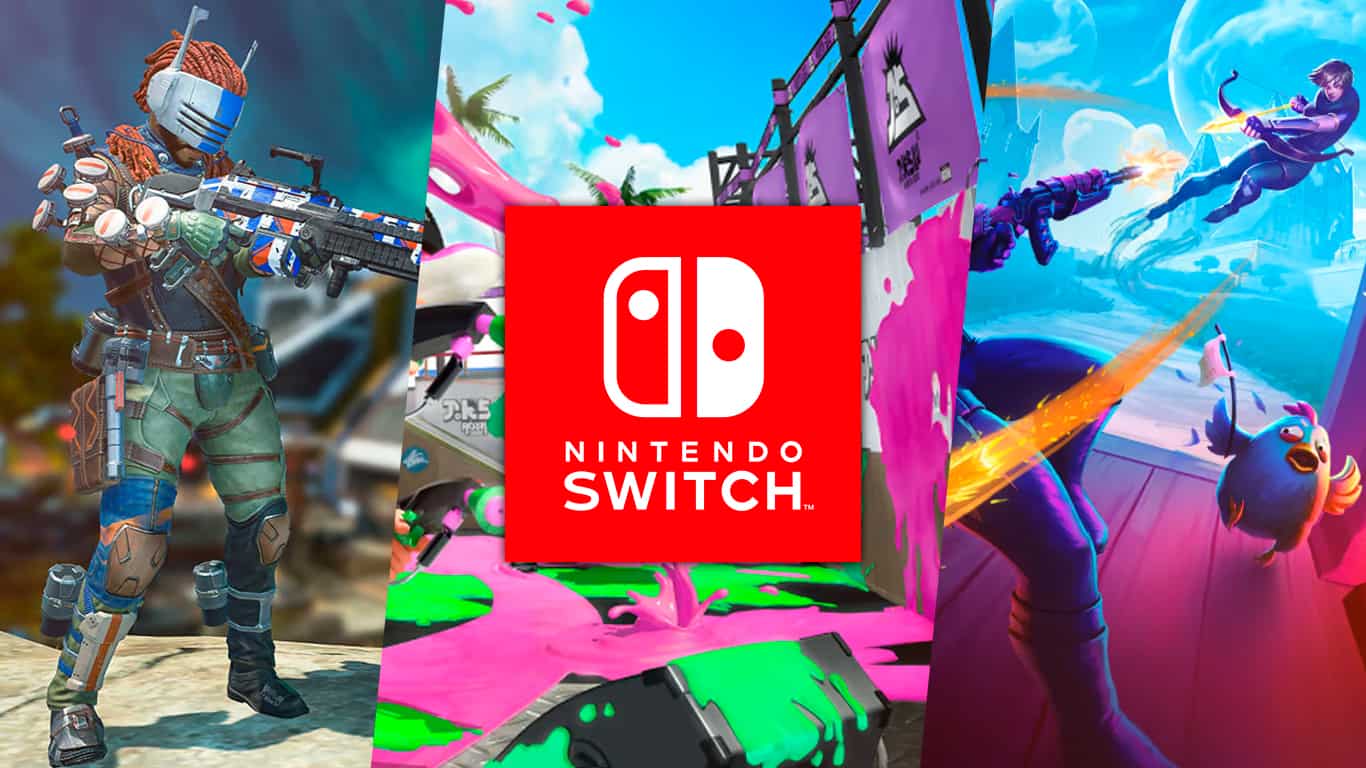 Fortnite is a viral sensation, with its Battle Royale attracting over 125 million players in less than a year after its launch.

Players compete in a free-for-all action-building battle royale where up to 100 players fight to be the last person or team standing.

Throughout a match, players must scavenge for resources and weapons to survive and eliminate other players.

With a mix of PvP and building skills, the map shrinks as the round progresses, forcing players to clash until one is crowned the victor.

Fortnite is available on the Nintendo Switch for free, but some fans want more of the genre.

This guide gives you six games on the Nintendo Switch that are similar to the big hit Fortnite.

If you like free-to-play hero shooters similar to Fortnite, you’ll love Apex Legends.

Apex Legends is a battle royale hero shooter where players form a squad and fight it out as one of several heroes to be the last one standing.

This game is based on the lore-filled universe of the preceding events of Titanfall and Titanfall 2, both first-person shooters created by the same company.

Apex Legends is considered by a lot of the gaming community to be a worthy competitor to other battle royale-style games, having risen past 25 million players by the end of its first week. And by April 2021, Apex Legends boasted over 100 million players.

Players have the option to buy loot boxes and cosmetic items using real currency and in-game currency, given the opportunity to choose unique outfits for their characters and colors for their weapons.

Apex Legends offers a unique teammate system. As the safe zones shrink throughout the match and teammates are knocked down, they can be revived by other members of their squad by having someone collect their banner and bring it to one of many beacons on the map. If the banner isn’t collected in time, the player is eliminated for the round.

The battle royale-style of Apex Legends will immediately appeal to Fortnite players.

Though Apex Legends is free-to-play, there is a special champion edition for those who want some extra items, skins, characters, and more.

For another excellent battle royale-style experience, check out Realm Royale.

This free-to-play game is a third-person shooter based on Paladins, with many players stating the gameplay reminds them of the old days of World of Warcraft PvP.

The match starts out with 90 players dropping down onto a map, and then the safe areas start to shrink over time.

Players have to collect items and weapons to help them be the last player standing.

Realm Royale also comes with a squad mode, allowing players to join up in teams of four in a massive battle of 100 players.

Realm Royale offers a unique crafting system that allows scavenged items to be broken down and made into better items at specific points on the map called Forges. These areas often become scenes of heated battles.

When knocked down, instead of immediately being eliminated, players are transformed into a chicken.

In this ‘chickened’ state, players must survive attacks from other players for a short period of time, with their own attacks being reduced to short-range melee. If players survive the short duration as a chicken, they’re revived and ready to fight again as their regular character.

Many players have compared Realm Royale to Fortnite and Overwatch with its appealing visual aesthetic.

For a free-to-play game with unique features, Fortnite players will be right at home with Realm Royale.

If you want to put your Fortnite gun aside for some high-powered, visually appealing projectile spells, Spellbreak is your new best friend.

Spellbreak is an action-spellcasting multiplayer game where every player becomes a powered-up battlemage.

With elemental magic inspired by shows like Avatar: The Last Airbender, and combat inspired by Quake, players are geared up to dominate the Hollow Lands.

Being free-to-play, Spellbreak is a projectile-based PvP shooter, using gauntlets that shoot magical spells instead of guns.

There are a number of other abilities players can enjoy as well when they carry a ‘Rune’, such as flight, teleportation, or invisibility.

Magic comes in six elements players can choose from:

Spells are limited by Mana, while secondary spells have a cooldown timer.

Elements can be combined to make more powerful spells that allow a player to strategize and dominate the map.

With their own battle royale mode, Spellbreak is like Fortnite in a fantasy setting without building and weapons but with spells.

Even though Overwatch 2 doesn’t have a battle royale mode, the gameplay and feel of the popular first-person shooter title will remind you of Fortnite.

Overwatch is a team-based first-person shooter, which is also described as a hero shooter where players are split into two teams of six, each choosing their hero from a large roster.

Each team receives map-specific objectives that have to be completed in a limited amount of time.

Overwatch has millions of players and has remained one of the most-played games since its release in 2016.

The heroes are one of the best features of Overwatch 2, each memorable and unique in their own right.

There are tank heroes designed to take damage, support heroes that give healing and buffs to their teammates, and damage heroes that deal damage quickly.

Each hero has their own story and skillset with different moves, running speed, and attack style.

Another feature of Overwatch is that if halfway through a match you want to change your hero, you can.

Overwatch is designed to allow the player to adapt to any situation with their team.

Paladins is also a free-to-play shooter that Fortnite players will feel comfortable with right away, even though Paladins doesn’t have a battle royale mode.

The game features a deck-building system enabling you to make your playstyle unique and to personalize champions to your own taste.

Paladins is a first-person shooter that takes place in The Realm, with elements of both fantasy and sci-fi, such as medieval soldiers with shotguns.

It is team-based, where players are split into two groups of five players, competing for combat-based goals.

There are incentives to become an expert with any given champion, as players get to show off a unique title on their profile when they reach champion mastery rank 30.

Paladins comes with a few different types of game modes:

It may feel a bit restrictive due to no battle-royale elements, but for team deathmatches and customizable champions, Fortnite players will be able to enjoy a lot with Paladins.

For a unique spin on the third-person shooter genre, Fortnite players need to look no further than Splatoon 2.

Players control their characters, known as Inklings and Octolings in Splatoon 2, with colored ink as ammunition.

Inklings can transform between a humanoid form and a squid form.

Splatoon 2 has a variety of battle modes, such as Turf War, where teams are split into four versus four and race to cover the map with the most ink first.

UPDATE: Splatoon 3, the third game in the Splatoon series, has been released and features even more features. So, you might want to get for Splatoon 3 if you’re looking to get a Splatoon game!

Those are our picks for the best Nintendo Switch games like Fortnite!

Know of any other great titles that you believe should be included in this post? Let us know in the comment section below.