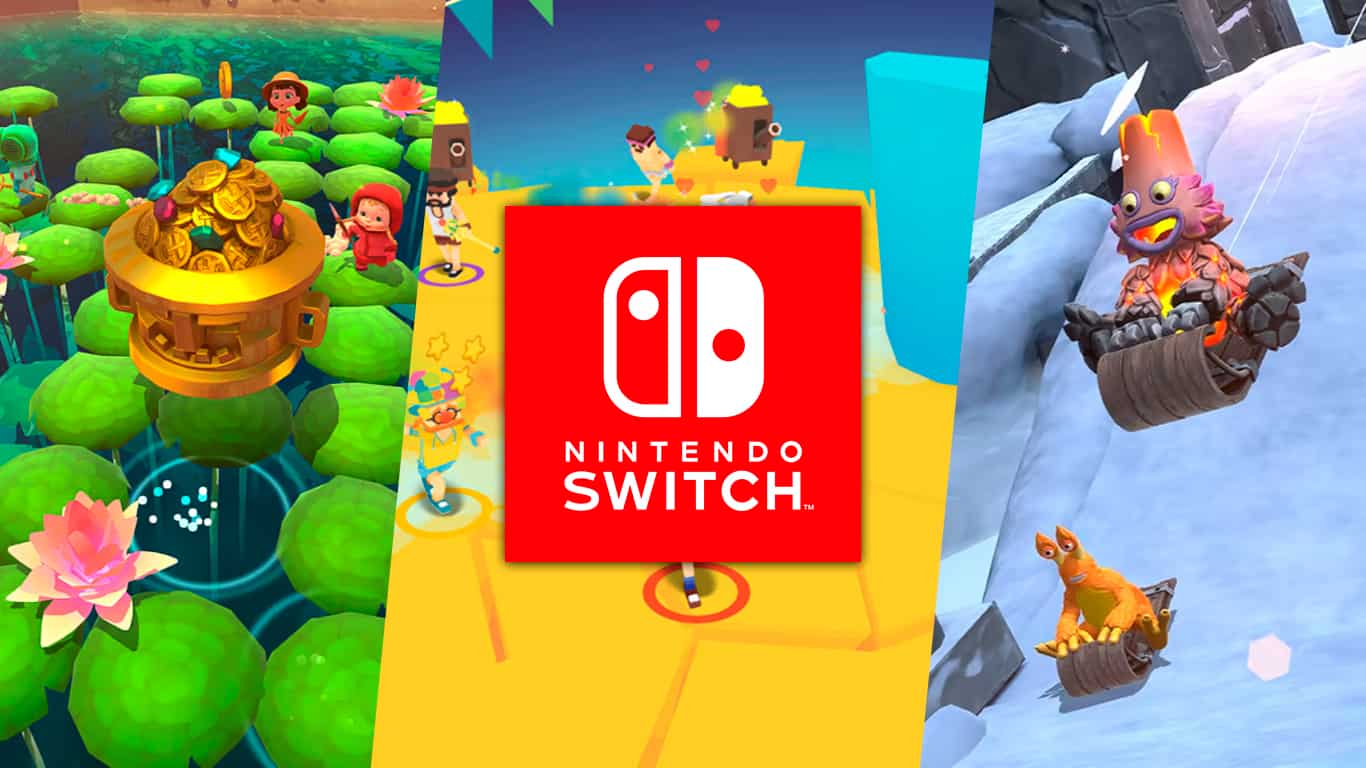 With their combination of thrilling minigames and tabletop strategy, these games always bring life to the party.

Thankfully, the selection of similar hectic games that are available is nothing short of impressive.

Below are our top picks for the best games on the Nintendo Switch that are like Mario Party.

Headsnatchers is an aggressively cute party game that doesn’t shy away from pure chaos. And that’s a good thing because the mix of adorable aesthetics and slapstick mayhem is amazing.

As the name implies, many of the minigames revolve around removing other players’ heads. Yes, you read that right!

In one game, you remove other players’ heads and try to throw them in a basketball hoop. While in another, you use them for bowling.

The mechanic adds a unique level of strategy to the minigames, as in addition to accomplishing each minigame’s challenge, you also have to keep your own head attached.

This feature further adds to the hilarity and randomness of the game. After all, what other game lets you rip off your friend’s cheeseburger head and kick it through a football field goal?

While it sounds pretty graphic, don’t worry – the game’s “violence” is purely cartoonish and fun. And even when your head is removed, you can still control your body!

Headsnatchers is an excellent party game for those who revel in pandemonium.

The unique gameplay, vibrant graphics, and refusal to take itself seriously make Headsnatchers the perfect game to play with friends.

Marooners is hectic and wild in the best ways possible.

In it, you choose an avatar from a colorful cast of quirky characters, ranging from pirates to vikings.

Then you and everyone else get dropped into one of 25 arenas, each featuring a unique minigame.

Whether you’re jumping between sinking lily pads or dodging fireballs while collecting gems, Marooners never gets old. And even better: this title manages to improve on the Mario Party formula by getting rid of any downtime.

There is no tabletop map to navigate or turns to take. Instead, minigames are thrown at you as an onslaught.

By the end, the player who collected the most coins across all stages wins.

Marooners also introduces an exciting element to the party game formula through weapons.

Players can use weapons to attack other players, giving themselves an advantage at crucial moments.

With over 60 weapons to unlock on top of additional characters and skins, the reward loop in Marooners feels immensely satisfying.

Do you ever miss going to the fair and playing skee-ball with your buddies? Or trying to nail that basketball shot for a bunch of tickets? If so, Carnival Games is the perfect game for you!

This Switch title boasts an impressive collection of 20 minigames, ranging from blacklight bowling to a Wild West shootout.

Not to mention the variety in environments you play in helps keep things fresh and exciting.

The “Jungle Lane” zone is just as lush and green as you imagine, while “Nuts and Bolts” is a steampunk-inspired world of gadgets and haunted houses.

Free play is perfect for when you just want to play for fun without keeping score.

Meanwhile, tournament mode adds some competitiveness by keeping track of how many games each player wins.

Just like at your local county fair, you can earn tickets by playing carnival games. However, there are no plushies or goldfish for you to buy.

Instead, you spend your tickets unlocking more minigames and stages to try out. That means that the more you play, the more Carnival Games has to offer you.

Few games manage to exude so much charm and cuteness so effortlessly. Not to mention it’s an absolute blast to play.

The cast of creatures you control varies from a scarf-wearing penguin to an anthropomorphic volcano. And each one has a unique set of costumes that you can unlock and show off.

The numerous zany and wild minigames are what really steals the show, however.

Each one provides a unique and exciting challenge – from racing along frozen castle walls to dodging giant spinning boxing gloves.

Our favorite is “Dipster Bop”, which is essentially whack-a-mole taken to the next level. In it, players compete to see who can bop the most dipsters, which are singing monsters that live underground.

My Singing Monsters Playground also includes a few different modes to select depending on your mood.

The 4-player Party Tournament mode is perfect for when you want to take on your friends. You can set it for 10, 15, or even 20 rounds of minigames.

And even if you’re alone, you can get a similar experience playing against computers in the single-player Gauntlet mode.

Players can enjoy the numerous minigames in a free-for-all or in teams of two. Either way, you’re sure to have a blast and a laugh battling each other with these quirky monsters.

Stikbold! dazzles players with a wild dodgeball adventure unlike anything else on the Switch.

The point of the game, like dodgeball, is to get other players out by hitting them with balls.

But Stikbold! takes it a step further by introducing a series of increasingly bizarre and dangerous stages.

Each of these stages provides unique challenges for the players.

One arena takes place on a scenic beach where rogue waves can stun players.

Another puts you on an oil rig complete with a giant angry whale and crate full of TNT.

Stikbold! also gives you plenty of options in regards to how you play with friends.

For parties, you can enjoy an all-out 6-player dodgeball brawl on one of many hazard-filled arenas.

If you’re feeling like working together, the game also lets you play through the story in co-op mode.

This title also has plenty to offer for solo players. Stikbold!’s story mode is hilarious and challenging. The in-game AI manages to be surprisingly strategic and quick to react.

The more you play, the more of the 18 playable characters you unlock. And if the game ever feels like it’s getting too easy, you can always try the challenging “All-Star” difficulty.

Air hockey, chess, mancala – Clubhouse Games: 51 Worldwide Classics has it all and more.

As the name suggests, this title is a comprehensive collection of the best tabletop games from around the world.

With everything from poker to mahjong, you can rest assured there’s something for everyone to enjoy.

Clubhouse Games lets you compete against your friends, computers, or random players online.

So even when you’re alone, this game manages to bring the party to you.

Not every game included in this title requires another player. You can also enjoy the many single-player options, such as solitaire and various puzzle games.

“Battle Tanks” especially is an absolute blast. It pits you and another player against each other in a small arena where you control colorful tanks.

The objective is to destroy the other player’s tank more before time runs out.

With its impressive catalog of games and flexibility in how you play them, Clubhouse Games has something for everyone.

Jackbox is one of the few party series that rivals the popularity of Mario Party.

The newest addition, The Jackbox Party Pack 8, comes with five brand new and hilarious games that are more than worth trying out.

One of them is the “Wheel of Enormous Proportions,” which is an exciting mix of Trivial Pursuit and Wheel of Fortune.

Meanwhile, “Weapons Drawn” is a social deduction game where every player is both a murderer and detective.

Many console games are limited to only four players locally, but not Jackbox.

In fact, you can have as many as ten people playing at once, either on teams or in a free-for-all.

You might be wondering how that’s possible. After all, the Switch can’t support more than eight controllers at once, right? The way Jackbox gets around this issue is ingenious.

Extra controllers aren’t necessary when playing Jackbox Party Pack 8. Instead, players can use their smartphones or tablets. You simply connect your mobile device through a quick and easy in-game setup process.

This versatility makes the title incredibly accessible, even for those who don’t play video games often.

Those are our picks for the best Nintendo Switch games like Mario Party!

Know of any other great titles you believe should be included in this list? Let us know in the comment section below.

What Gambling Site Does Tumblurr Use?