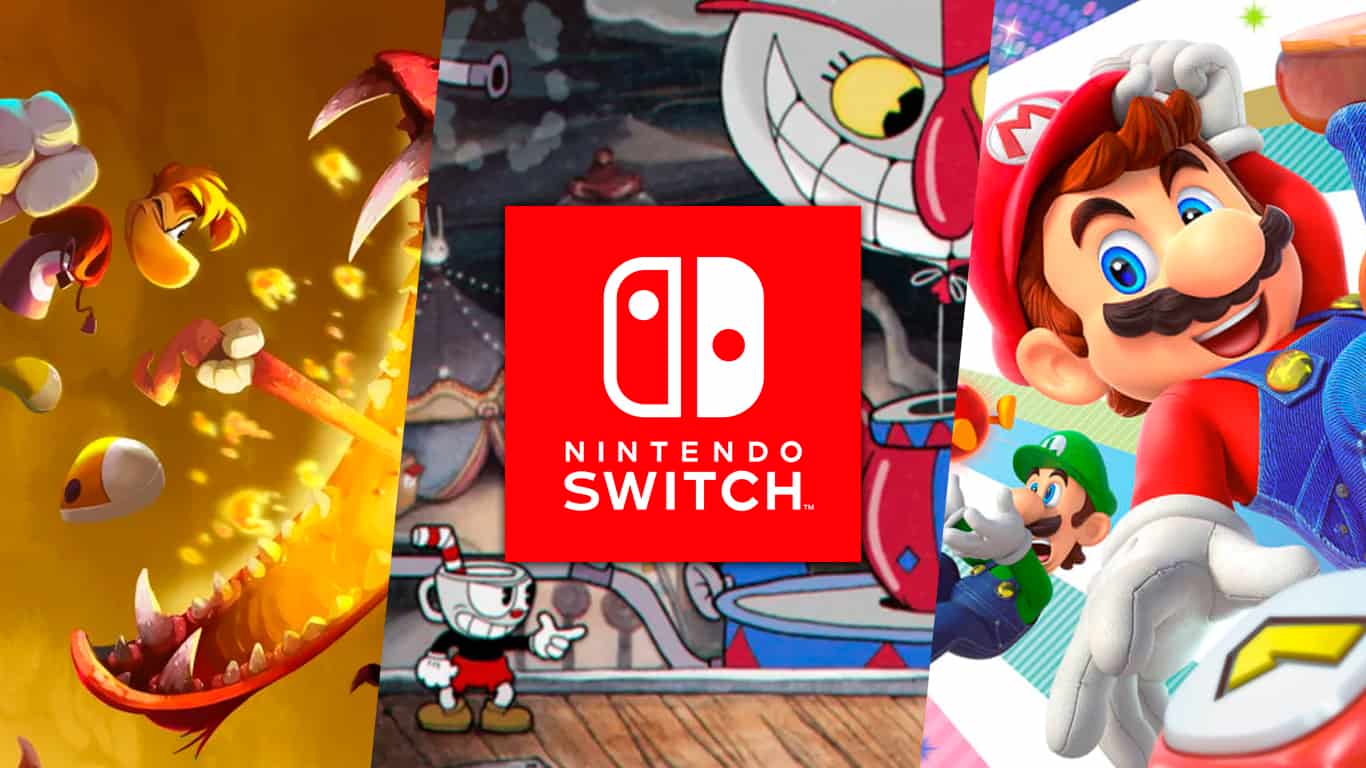 The Nintendo company has always had an excellent reputation for providing a good variety of family-friendly, fun gaming options.

The Nintendo Switch is a perfect addition to the Nintendo line, with plenty of local multiplayer games to keep you and your friends or family entertained.

Catch up with the latest adventures of beloved Nintendo favorites like Mario in Super Mario Party and Mario Kart 8.

Or perhaps you’re in the mood for something new, like the popular 1-2 Switch with face-off game features like never before?

With a little something for everyone, the Nintendo Switch provides players with opportunities to enjoy classics and new games alike!

This guide gives you the eight best multiplayer Nintendo Switch games to play with friends on family locally.

Whether you want to satisfy your competitive nature by winning against your fellow players or want to team up on an adventure, we have a title for you to give a try!

Ubisoft released Rayman Legends Definitive Version in late 2017, and players quickly fell in love with the stunning artwork and seamless game flow all over again.

Previous versions of the game boasted great graphics and seamless play; however, the release of Rayman on the Switch is giving players the chance to play; and rock to the rhythm, like never before!

You and up to 3 other players can fight, jump, and run your way through the levels to save The Glade of Dreams in local gameplay with no internet connection.

Or you can compete like never before in the Kung Foot tournaments with the Switch’s wireless controllers!

Either way, players will love having access to ALL of the Rayman characters for the very first time ever!

Things will be a little different playing with the new Nintendo Switch controllers.

Timing and rhythm will be a HUGE part of your quest to become a platform rocker!

Players can punch, zip-line, jump, and more to the beat of the music like never before to complete more than 80 stunningly gorgeous levels.

There are lots of fun new features to interact with either wirelessly or with the touchpad, like gyroscopic platforms and 3D bosses you can attack on the portable touch screen.

These new features are a big part of what makes this platformer possible to enjoy playing again and again.

Mario Kart 8 is inarguably the best installment in the game series to date. Released by Nintendo in early 2017, Mario Kart 8 quickly became the new favorite of fans of the franchise.

You and your friends are in for hours of exciting, fast-paced races! Whether you’re a returning champion of previous Mario Kart tracks, or a brand new driver ready to learn the tricks of the tracks, you’ll love it!

The Nintendo Switch release of Mario Kart is by far the most inclusive version so far, with tons of character options and kart modifications to unlock.

Mario Kart 8 boasts the best that older versions of the game had to offer in the way of game physics, classic characters, and fan-favorite tracks.

The new content keeps the game fresh for fans of the classic Kart games.

The ability to unlock new features and characters will keep players in friendly competition for hundreds of hours!

Released in mid-2018, Overcooked! 2 was received very well by fans of the original game who were hungry for even more Overcooked action!

With this newest Overcooked base game, you’ll whip your way through more than 75 tasty levels.

All with your hand-picked team of chefs either working together in local co-op or working against each other to unleash even more kitchen chaos.

With 20 chefs to choose from and a variety of quirky, crazy kitchen spaces that can whisk you away to other lands, you and your friends are in for A TON of couch co-op kitchen fun.

Suppose you chop your way to the top. In that case, there is also a great variety of themed downloadable content to keep the kitchen adventure going even longer!

Super Mario Party for the Switch was released by Nintendo in late 2018 and received a warm welcome as a party game for fans of other Mario games.

In addition to Mario, there are 20 different characters to stir up the board and collect coins with!

Players can compete as their favorite classic characters or choose from new options!

As fans of the previous versions already know, you can look forward to competing with other players in a myriad of minigames, some trickier than others!

You can play locally with up to four players, rolling dice for coveted positions on the game board, coins, and more.

In the latest Nintendo Switch version of Mario Party, players will face off in various potential combinations, including free for all mode, 1 vs. 1, 2 vs. 2, and even 1 vs. 3.

While it has a similar feel to the classic Wii Sport, all controls and graphics are taken to the next level, making it worthy of being a Switch title.

With several sports to play – from volleyball to bowling, there’s guaranteed to be a game for you.

Nintendo Switch Sports is a great game to play locally with your friends or family, as you not only are in for a fun and competitive time, but you also get a whole different experience being up and active instead of sitting down.

Do you remember the old classic game Cuphead for the X-Box? Well, Nintendo has stepped up its game when it comes to picking up quality third-party titles.

Cuphead fans will be happy to hear that Nintendo scooped it up and released a reboot of the classic game in early 2019!

Fans of cartoon graphics and good musical scores are also in for a real treat with Cuphead for the Switch system.

This brilliantly cell-shaded animation game is based on 1930’s cartoons, with their penchant for goofy fights and slap-stick humor.

Complete with original jazz music recordings, this feel-good fight to clear your debt with the Devil will entertain you and a friend in local play for days at a time.

As a reboot, there isn’t really any change in content to anticipate with this release.

Players are excited for another reason; however – the Joy-Con controllers are a HUGE upgrade as far as playability goes.

The run-and-smash (or shoot) side-scrolling dynamic of the game requires a lot of dexterity and super precise combos, which are, for many players, are easier to accomplish with the Nintendo Switch’s controllers.

Fans of the Super Smash Bros. franchise can’t get enough opportunities to smash it up with friends on the 2018 release!

The Nintendo Switch’s latest Super Smash Bros. Ultimate edition gives friends the opportunity to locally go head to head, a free-for-all with up to 4 players, team up, or practice against the computer.

Online play allows up to 8 competitors per game, unlike ever before! Ultimate really is the keyword to take note of here.

This version of Super Smash Bros. has ALL of the characters of previous versions, plus an additional 11 characters built-in as unlockables!

The game also features a ton of other new content that will keep you entertained indefinitely, especially once you get into the downloadable content.

New attack combos, better shields, and even faster play on more stages than ever before await players in this comprehensive smash-em-up fight game featuring fan favorites of several genres.

In this version of the game, you have a lot of fun new options to play around with, including stage selection.

Choose from 103 different stages to play. They’re listed in the order they were released initially to make it easy to find your old favorites, from Delfino’s Plaza to Peach’s Castle.

If players have trouble choosing quickly between so many options, they don’t have to choose at all.

A new feature allows you to drift through a variety of morphing stages in battle.

The morphing stages add a bit of extra challenge as you fight with your friends- or against them!

Released in early 2017, 1 2 Switch was (obviously) designed with the Nintendo Switch’s new feature line-up in mind.

Play alone or two at a time; local players can get in on the quirky and fun make-believe action this game is known for.

Use the Joy-Cons to face off against your friends one at a time, literally.

1-2 Switch features 28 minigames. 27 of these minigames encourage players to face one another rather than the screen for a fun change of pace.

Play locally with one friend, or assign turn-based teams to keep the fun going as your party grows!

Many of the minigames you’ll find yourself competing in include some pretty hilarious pantomime.

The opportunity to beat your friends at activities like milking cows, telephone, and the quick draw is a rather unique experience.

Even if you don’t play the game, you’ll laugh until you’re sore just watching your friends.

UPDATE: Splatoon 3 has now been released as well, which is the third installment of the Splatoon series. We recommend getting Splatoon 3 if you’re interested in getting a Splatoon game.

Released in the summer of 2017, Splatoon 2 is a direct sequel to Splatoon.

It picks up the thread of the previous game with a new single-player mode that’s story-driven.

Friends can play together locally, provided they have their own Nintendo Switch and copy of Splatoon 2.

Up to 4 Switch systems can be connected for a hoard-style co-op mode called Salmon Run that will really test players’ skills!

The Inklings are sporting all new gear, from character fashion options to weapons and other cool gadgets.

And they’re ready to claim more territory than ever before in this brilliantly colorful, chaos-packed third-person shooter.

Those are our picks for the best multiplayer Nintendo Switch games that you can play locally!

Know of any other local multiplayer Switch games that you believe should be included in this list? Let us know in the comment section below.