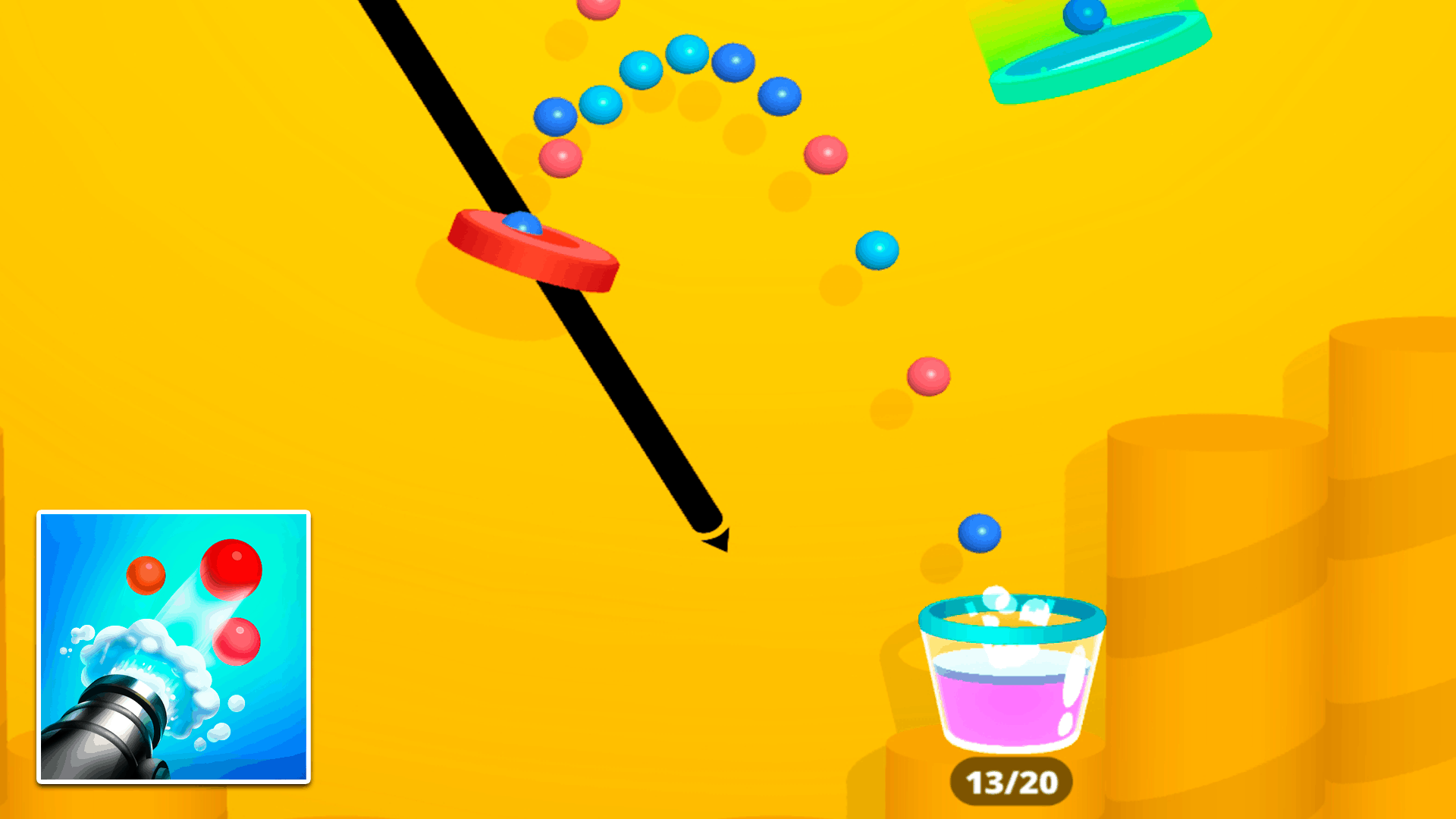 SayGames are known for publishing simple, clean games, and Cannon Shot! is no exception.

The premise of the game is simple enough that everyone can get into it, but mastering the later levels is no easy task.

Cannon Shot! requires some thinking, so if your up for some interesting puzzles, this might be a game for you.

Cannon Shot! is available on the App Store and Google Play.

In short, your objective in Cannon Shot! is to set up the map for your cannon to shoot balls into one or more buckets.

The game features many different obstacles, which makes every level unique.

With the tips and tricks presented in this guide, you are sure to become better at the game, and increase your chances of beating those tough levels!

The objective of Cannon Shot! is to move pieces on the map, to make the cannon shoot balls into the transparent bucket.

There are no levels in which you can shoot directly into the bucket, so you’ll have to use the tools given to you.

The most common object you can move around is a bouncer, which bounces all balls of it at an angle.

At the start of the level, you can see on the cannon how many balls you have to shoot in that particular level.

Depending on the number of balls you get in the bucket out of the total amount, you’ll get a score between one to three stars.

The more stars you get, the more exp you get towards your cannon, so that you can unlock a new one.

You can move objects around by dragging them on their designated lines.

On some levels, you have to move multiple objects in order to get the balls in the bucket at the end.

Besides setting up the map correctly, there are also obstacles such as a spinning wheel, that you might have to avoid in order to get the balls into the bucket.

This means some levels not only require you to think about the positioning of objects, but also the timing of your shots.

To shoot the cannon, hold your finger on the screen.

It’s not always easy to predict how the balls will bounce off and interact with objects on the map.

Therefore, a method that can help you beat a tough level is to move objects after shooting balls.

If you shoot a couple of balls and instantly start moving objects, you can adjust and experiment with object positions in real-time and see how balls react to changes.

Using this method, we’ve quickly been able to figure out how to complete a difficult level in no time.

If you want to get three stars while using this method, reset the level as soon as you figure out where the objects should be positioned.

You can then reput where you just figured out they should be, get all the balls in the bucket, and pick up those three stars.

You have unlimited tries

There is no rush to complete levels in Cannon Shot!, nor is there a limit on the number of times you can redo a level.

Therefore, you should experiment as much as you want, as there is no downside to doing so.

If you wish to restart a level in the middle of one, simply press the reset icon in the top left corner of the screen.

How to get coins

To get new balls in Cannon Shot!, you need coins.

The primary way to obtain coins in the game is from the chest room.

The chest room is a room with 9 chests, of which you get to open 3 for free, and 3 more if you watch an ad.

All but one of the chests in the chest room contains coins; the last one contains a new ball skin.

To get into the chest room, you need 3 keys, which you get by completing levels.

Every couple of levels, the bucket will have a golden key in it, which you can get by getting a ball in the bucket.

We found that you need to complete about 10-15 levels to get 3 keys, and thereby get access to the chest room.

A popular feature in mobile games these days is the ability to change the look of your character, items, etc.

In Cannon Shot!, this is possible as well.

One of the things you can change the appearance of is balls.

There are two ways to get new skins for balls.

The first is by picking the right chest in the chest room, which is pure luck.

We’ve described how to get to the chest room in the paragraph above.

The other way to get new skins for balls is by buying them from the ball shop.

Skins for balls cost coins, which you can get from chest rooms.

You can’t pick a specific skin for balls. Instead, you spend some coins, and then get a random skin from the section you’ve selected.

The cost of a random skin goes up every time you purchase one.

Even though the entire shape of balls changes when you select a new skin, the way balls interact with objects doesn’t change; it’s pure cosmetics.

Your main objective in the game is to position different types of objects to make the cannon shoot balls into the bucket.

We’ve completed quite a few levels so far, so here is a list of the different objects we’ve run into thus far.

How to get a new cannon

Every time you complete a level, you get a small amount of exp towards a new cannon.

The amount of exp you get depends on the number of balls you get into the bucket.

At the end of each level, you can see the exp fill up an outline of a new cannon as well as a percent value.

Once this outline has been filled up with exp, and the percent value reaches 100, you can unlock that cannon if you watch an ad.

If you don’t watch the ad, you don’t get the cannon, and you’ll just start filling up a new cannon with exp from scratch.

There are many uniques cannons in the game. So far, the most special we’ve seen is a trumpet and a box of popcorn.

Some levels in Cannon Shot! are tough and not easy to figure out.

Therefore, we’ve put together the following videos to help you get through tough levels.

Walkthrough of level 1 to 50 in Cannon Shot!

That’s all our tips and tricks on Cannon Shot! by SayGames.

If you have any other tips and tricks for the game you believe should be in this guide, you can share them with us in the comment section below.