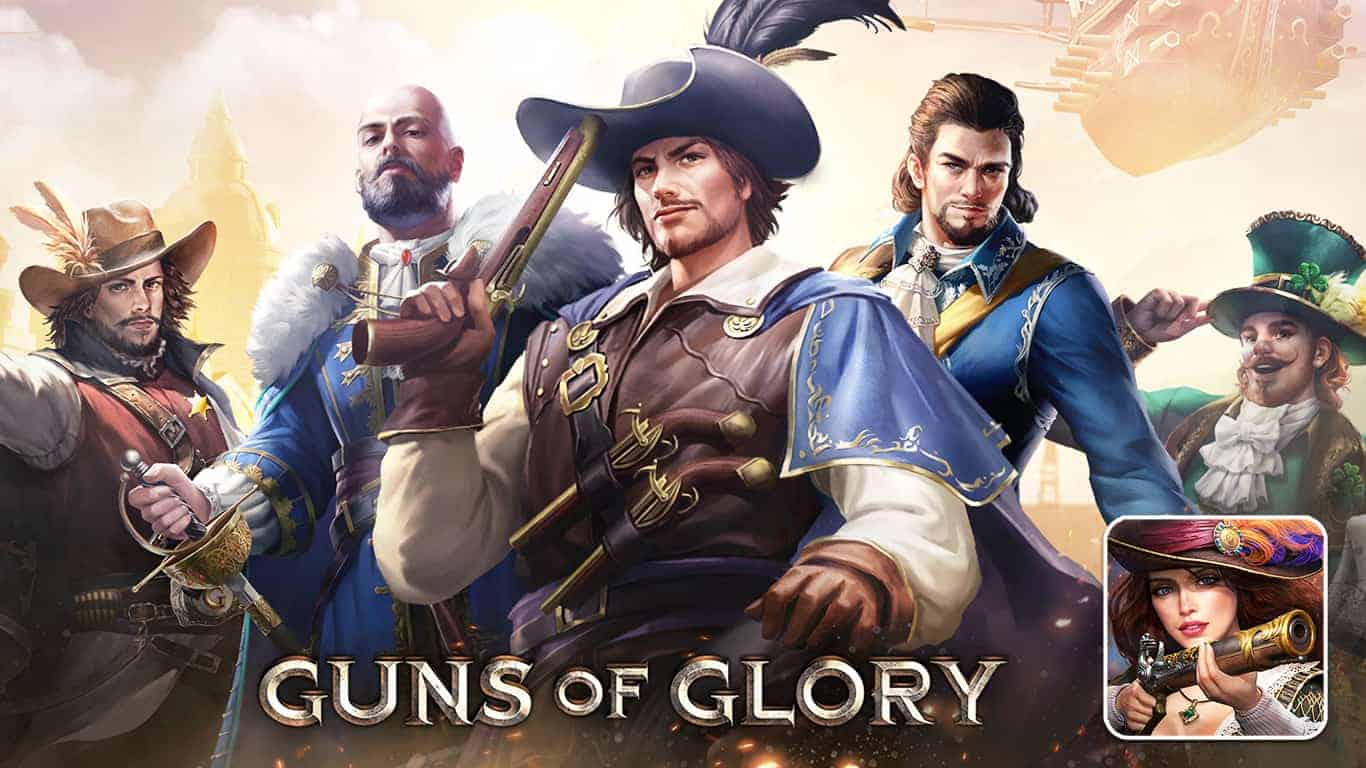 Guns of Glory is a strategy mobile game by Century Games in which you build a mighty kingdom, train a strong army, and expand your territory on the world map.

Throughout your journey, you’ll be experimenting with unique army and guard setups and strategies.

To help you achieve new heights in the game, you’ll be fighting alongside your alliance of other players taking on other alliances.

In this guide, we give you tips and tricks to get a great start and progress faster in Guns of Glory.

Guns of Glory takes place in medieval times, where you are the commander of a mighty city.

Your job is to upgrade your buildings, build new ones, train troops, gather guards, collect resources, and more.

Once you’ve trained a strong army of troops, it’s time to take on the vast land filled with other players to fight and enemies to take down.

You can access the world map by clicking the button in the bottom right corner of your screen.

On the world map, you can see all players, enemies, and resources you can march to as well as the location of your kingdom.

The farther away from your kingdom, an objective is, the longer it’ll take for your army to reach it.

To help you find nearby enemies, camps, or resources near your kingdom that is of a suitable level, you can use the search function in the bottom left corner.

Before you start marching towards an objective, you can build the army you wish to use for that march.

You can choose one guard and troops at the beginning of the game, and two guards and troops after your castle reaches level 10.

Besides training different troops, you will also be further customizing your army’s abilities by unlocking talents, attributes, and research buffs.

As the game heavily revolves around team play, a big part of the game is to expand your alliance’s territory to obtain rewards.

How to get guards

Guards are special characters that lead your army in battle.

Not only do they have amazing power, but they also have various skills to increase your chances of victory, including buffs for your army.

The main way to get guards in Guns of Glory is by recruiting them in the Recruitment Hall located to the left of your Castle.

There are two types of recruitments in the game, Normal and Master.

Normal recruitments are cheaper to do, as the required resources are easier to obtain, but master recruitments can give higher-tiered guards and have better odds.

Every single day, you get three free normal recruitments, and every 48 hours, you get one free master recruitment.

The main way to get guard badges and recruitment banners is by marching to and defeating threats and red guard camps on the world map.

All guards have unique powers and skills, which means you should collect several of them so you can adapt your army to different enemies.

Guards come in different tiers, with those of higher tier often being more powerful than those of lower tier.

However, if you need a specific trait for your army, it might be better to use a lower-tiered guard with the trait instead of a higher tiered guard.

The speedup is an incredibly useful item in Guns of Glory.

It allows you to reduce the remaining time of any construction, upgrade, or training, depending on the type of speedup.

There are three types of speedups, construction speedups, training speedups, and general speedups.

As their names imply, construction speedups can only be used on buildings being built or upgraded, training speedups on training troops, and general speedups on anything.

As speedups can significantly speed up your rate of progression, it’s important to spend them wisely.

At the beginning of the game, we’ve found it useful to spend general and construction speedups on your Castle, as no other buildings can surpass the level of this building.

Therefore, you need to upgrade your Castle before you can progress further.

Later on in the game, however, we recommend prioritizing the Academy, as you cannot research new buffs while it is being upgraded.

Likewise, you cannot train troops at troop generating buildings while they are being upgraded, so you should prioritize these as well.

You can get more speedups through several activities in the game, including rewards from defeating threats and red guard camps, opening chests, completing quests, and more.

The best way to ensure you don’t miss out on important content and resources in Guns of Glory is by following chapter mission.

Chapter missions are simple tasks you can complete to obtain useful rewards and resources.

Usually, tasks ask you to upgrade a specific building, fighting a number of enemies, or train a number of troops.

You can find your current chapter missions by pressing the book icon on the left side of the screen in your kingdom.

Upon clearing all chapter missions for a specific chapter, you receive a bunch of rewards, including recruitment banners, resources, and EXP.

Another way to get items and resources in the game is by completing quests and events.

Quests are similar to chapter missions as they require you to carry out simple tasks in return for rewards.

There are two types of quests, main and daily quests.

Main quests take longer to complete than daily quests, but there is no rush to do these.

Daily quests reset daily, which means you have to complete enough of them daily to get the most valuable daily quest rewards.

You do get some resources and items from completing daily quests themselves, however, the real rewards come from daily quest chests.

You can browse all your quests by clicking the quest icon on the left side of your screen in your kingdom.

Events are always running in Guns of Glory, allowing you to earn even more rewards by doing different activities.

To check all live events as well as upcoming events, click the ‘Event Center’ button in the top right corner.

Depending on the event, you can earn anything from speedups to recruitment banners by participating in events.

Benefits of being in an alliance

You should join an alliance as soon as possible in Guns of Glory.

Not only does joining an alliance come with several benefits, but it also makes the game more exciting because of team play.

As soon as you join an alliance, you receive 200 coins and access to a lot of new features.

Some of the benefits of being in an alliance include gift chests, the alliance store, donations, and goods exchange.

Furthermore, once you’re in an alliance, you can fight alongside your alliance members in wars and regular attacks on other kingdoms.

Alliance members can also help you out if you’re under attack or in need of specific items or resources.

Lastly, you can contribute to the expansion of your alliance’s territory on the world map, which will earn you more rewards.

To join an alliance, press the ‘Alliance’ button in the bottom menu, and find an alliance in the list.

All alliances are either on recruit-basis or apply-basis for joining.

Alliance with the ‘recruit’ button can instantly be joined by anyone, while those with an ‘apply’ button requires the alliance leader to accept your application before you can join.

If you’re a new player, we recommend finding an alliance on a recruit-basis, as you can join one of those instantly.

Later on, you might want to join another stronger alliance that requires you to apply, as they are usually more established.

That’s all our tips and tricks for Guns of Glory!

With this guide, you are hopefully better suited for starting your journey in the game and progressing faster.