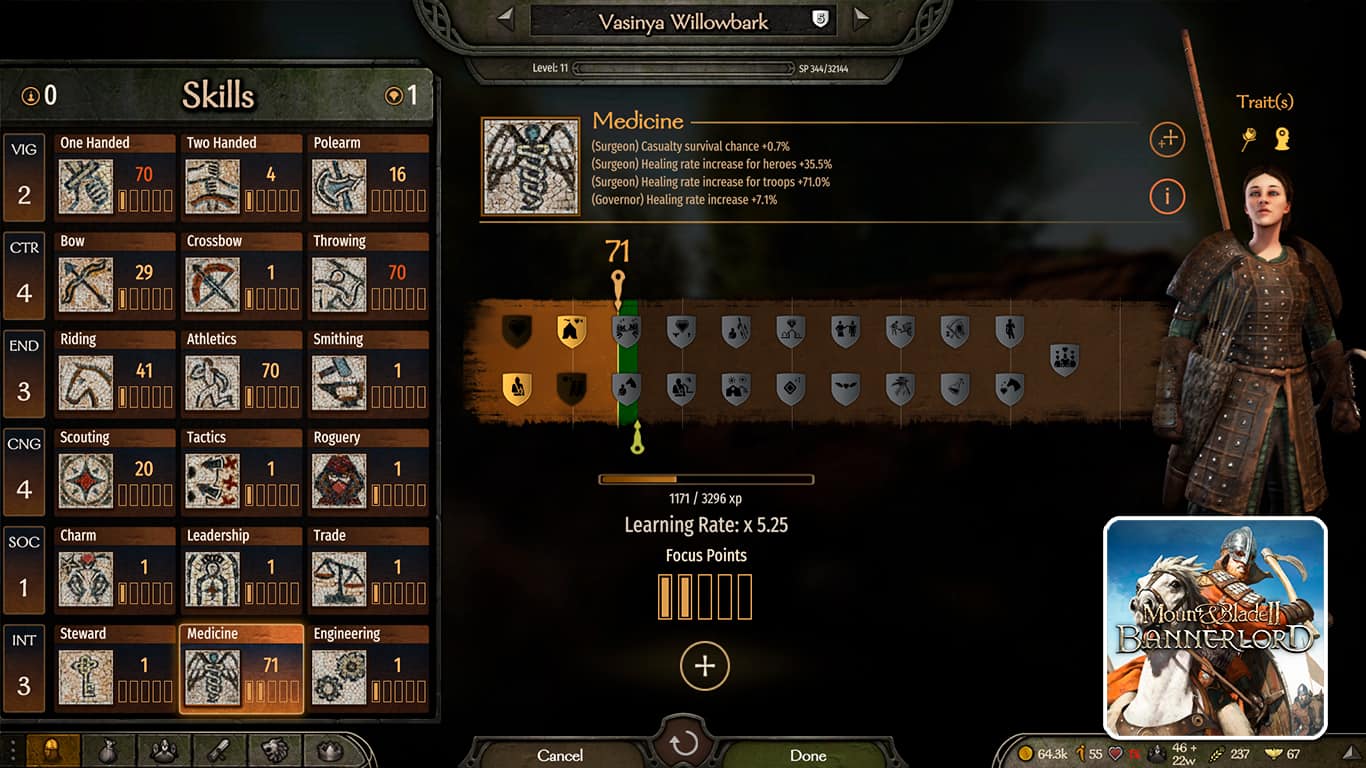 There are many useful skills in Mount and Blade 2: Bannerlord, and Medicine is one you will want to level up very fast!

The Medicine skill decides how many of your troops are injured rather than defeated and will help you heal companions and troops alike in record times.

Recommended Read: How to Increase Town Loyalty in Bannerlord

When the game first came out, Medicine was one of the slowest growing skills in the game. Things have recently changed, so leveling it up fast is no longer impossible!

Luckily, there are a few choices when it comes to increasing this ability. Here is how you can level the Medicine skill in Mount and Blade: Bannerlord fast, along with some advice in regards to the possible perk choices.

How the Medicine Skill Works in Bannerlord

Bannerlord’s Medicine skill is vital when it comes to keeping your troops alive, and it is responsible for 3 simple areas of the game:

While in battle, players will often see that troops are either knocked unconscious or defeated when they are defeated. This is influenced largely by the Medicine skill of the party’s designated Surgeon.

Though this number sounds small and insignificant, the actual result for a +3% casualty survival chance will be huge. More than 3/4 of your troops will survive most encounters.

HP recovery for a level 1 Medicine Surgeon will be incredibly slow, with dozens of troops taking days to heal. With a level 100 Medicine stat, those troops would heal over 60% faster.

Now, all these numbers sound great, but how exactly do we level up this Medicine skill fast in Mount and Blade: Bannerlord?

How to Level Medicine Fast

There are 3 ways Warband leaders can level Medicine for the Surgeon of the party:

By just doing these things, the Surgeon will constantly receive XP. This is good to know since this means that just fighting is good in leveling the Medicine skill.

However, none of these ways sound efficient or fast in any way. So, here are some cheesy methods you can use to level Medicine fast in Bannerlord:

Sieges can be very dangerous. Especially when the enemy has catapults.

When the player and their army siege a castle, the first thing they need to do is save. Afterward, they will have to check if the defenders are building catapults. If they are not, load the save until they are.

Then, when the battle for the castle starts, put all your troops close enough to be in range to the catapult and make them sit in a big pile.

Your troops will become an easy target for the enemy catapults and will probably be defeated in seconds. This will help you gain Medicine levels incredibly fast.

One easy way to do this is to first recruit only bad troops. This would normally not sound good since high-tier troops will also give the Surgeon more XP than low-tier ones, but for this method, they are just perfect!

Once your big, useless army is ready, join a kingdom as a mercenary and, preferably, join an army. Now, all you have to do is wait for battles.

When engaged in battles, send your troops charging from the start and let them die. This will help you gain XP from their death, as well as from the recovery of the injured troops!

This method works well because you can just leave your kingdom if you lose the battle before you surrender and deaggro the opposing kingdom. Win, win.

Players will also avoid any type of debuffs they would get by leaving the kingdom since they are just mercenaries.

This might be the simplest strategy out of them all. Just starve your troops.

Once all of them appear as injured because of it, get some food, and they will start to heal. In a month or two, you will reach incredibly high Medicine levels.

The only problem with this method is that the Surgeon will not receive XP from the death or injury of the troops, which normally happens in battles.

So, if you prefer a more nonchalant strategy, this is the one for you.

That’s everything you need to know about the Medicine skill in Mount and Blade: Bannerlord!