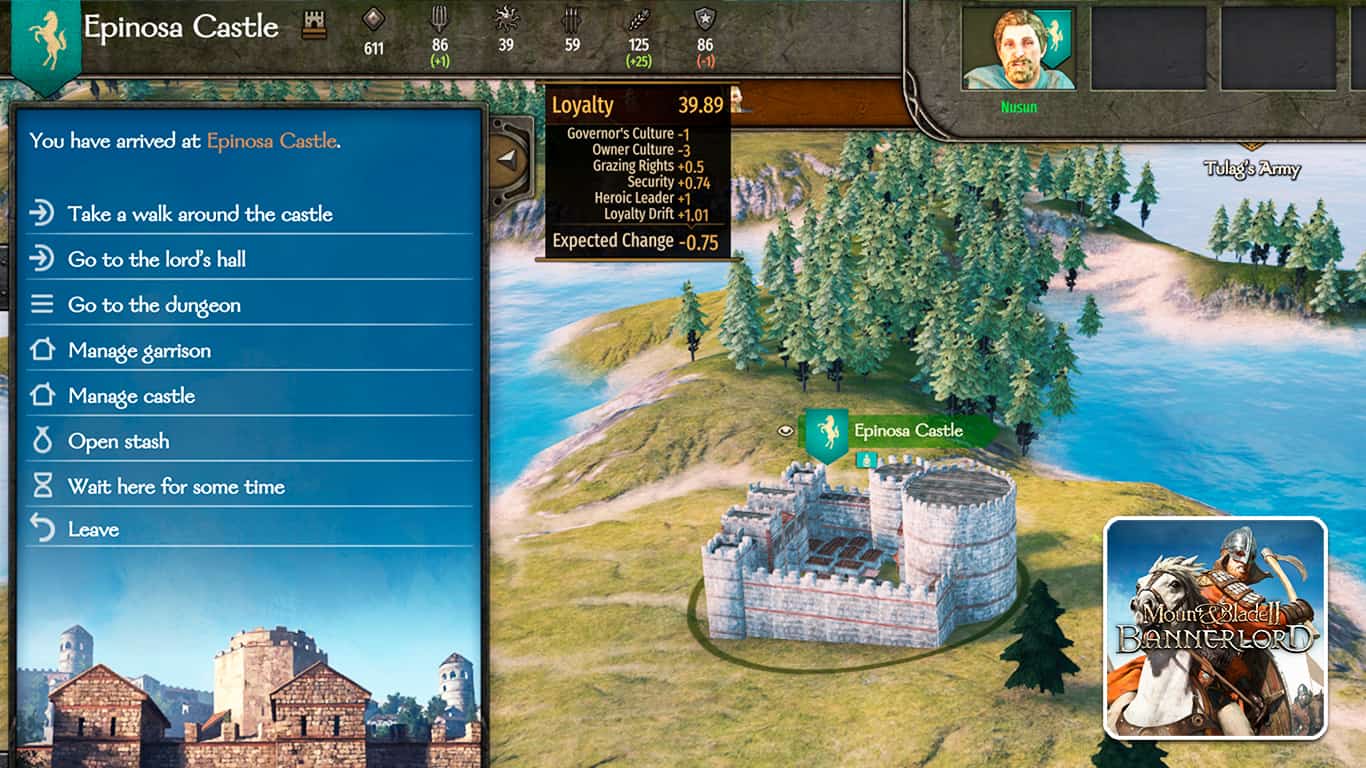 All Town stats, such as Loyalty, Food Stocks, or Security, in Mount and Blade: Bannerlord need to be sustained if you want your town to be useful and profitable.

These special Fief attributes are correlated and will affect each other in significant ways. If Food or Security are down, your Loyalty won’t be far behind.

Recommended Read: How to Level up Medicine Fast in Bannerlord

Town Loyalty also suffers from a mechanic called “Drift”, which tries to stabilize it at around 50. If you go over 50, you will start losing Loyalty, and if you go below, it will increase.

Since there are many more things to learn about Mount and Blade: Bannerlord’s Town Loyalty, we have decided to write an extensive guide explaining how this stat works and how you can increase it to the moon!

Bannerlord’s Town Loyalty is one of the 6 special fief stats that will either boost your taxes or cause widespread rebellions.

By having a high Town Loyalty, you will get boosts to Prosperity, taxes, construction, and access to more militia troops. This will turn most cities and castles into great military and economic centers.

Your Town Loyalty can be increased by having good governors, high Security, special buildings, and popular policies. It can also be decreased by low Security, low Food Stocks, cultural differences, and unresolved issues.

One great bonus that comes with high Loyalty is the boost in taxes. When Loyalty is higher than 75, the ruler of the land will receive a bonus for the amount of taxes they receive. This bonus has an upper cap of 20% that players can reach when hitting 100 Loyalty points.

There is also a mechanic implemented by the devs that try to get Loyalty to 50. The Loyalty Drift stat will either increase your Loyalty when it is under 50 or decrease it when it is over 50.

Loyalty Drift will fluctuate from -5 to +5, depending on the amount of Loyalty you have. -5 is the maximum you can lose when Loyalty is 100, and +5 when it is 0.

Think of it this way: if your fief loyalty is high, your town will be very helpful in your world conquest; if not, low taxes will be the least of your problems. However, the game will try to somewhat save you with the Drift.

Town Loyalty Debuffs and How to Fix Them

Loyalty can and will be badly influenced by many things. The most detrimental debuffs you can get for your newly conquered fiefdom are:

The first problem, the different owner culture debuff, will be with you till the end of the game (forever). If your character is Battanian, every town and castle conquered outside Battania will have this -3 Loyalty deficit.

When selecting a governor for a fief, make sure that the companion in charge has the same culture as the town. By selecting a same-culture governor, you will actually gain +1 Loyalty per day, instead of -1.

If the morale of the people is important to you and there are no sam-culture companions to choose from, you can just not choose a governor for now. This will at least fix the short-term problems of the -1 modifier.

The “Starving” negative modifier comes from low to zero food. To fix this, try to increase your Food Stocks by selling a lot of food into the settlement and building special food-producing buildings.

Issues can be fixed by doing quests for the notable characters in your city. As long as a single notable NPC in the fiefdom has a quest for the player, a -0.1 debuff will be there.

How big the debuff is matters based on the severity of the quest and the importance of the person that gives it.

If a significant town citizen has an important quest, the modifier can be as high as -0.5 per day. However, no matter how many people have quests for you, the modifier will not exceed -0.5.

If rulers don’t stop these debuffs or offset them with Loyalty buffs, they have huge chances of losing their town or castle to rebellion.

Rebellions only happen if the player is not situated in the town and when the militia is bigger than the garrison. If you are ever afraid of rebellion, storing a lot of troops in the garrison will help.

When a rebellion triggers, the user will instantly lose the town and will have to fight to get it back.

How to Increase Town Loyalty in Bannerlord

There are a couple of ways to increase Town Loyalty in Mount and Blade: Bannerlord:

The Fairgrounds are mandatory for hostile keeps that have many negative debuffs. By building them and upgrading them, you can get +1.5 Loyalty per day at level 3.

We said before that selecting a same-culture governor will get you a +1 daily buff. Well, there are also special character perks that will increase Loyalty by 1 per day:

By getting Security to 100, you can get up to 1 daily point in Town Loyalty. Lords can increase Security by storing a large garrison in the city and doing various quests in the fiefdom.

To make sure that Security stays high, you must always resolve the issues in the town and surrounding villages (-1 to -2 Security) and destroy any bandit hideouts (-2).

Security also suffers from the dangerous Drift we talked about earlier, but this one can only reach -3.33 at 100 Security.

The Festivals and Games Daily Default will provide the lords of the town with 3% of Constructions into Loyalty. This is great for people who managed to raise Prosperity properly. However, this buff does not work if you are building something, so be careful when using it.

Befriending and getting the support of notable characters in Bannerlord will quickly increase the Town Loyalty. Players can get +0.5 Loyalty per supporting character, with no upper cap limit.

The problem with getting support from the important NPCs is that it’s random. You can have 100 relation with a powerful individual, and they can still support someone else.

The last way to increase Town Loyalty in Mount and Blade: Bannerlord is through Kingdom Policies. If you are the ruler of your own kingdom, this will be easy. If not, gamers will have to use influence to get the wanted policies. These are the policies that can help get Loyalty up:

These policies have many ups and downs, so think carefully before choosing one that might destroy your country.

That’s everything you need to know about Town Loyalty in Mount and Blade: Bannerlord!