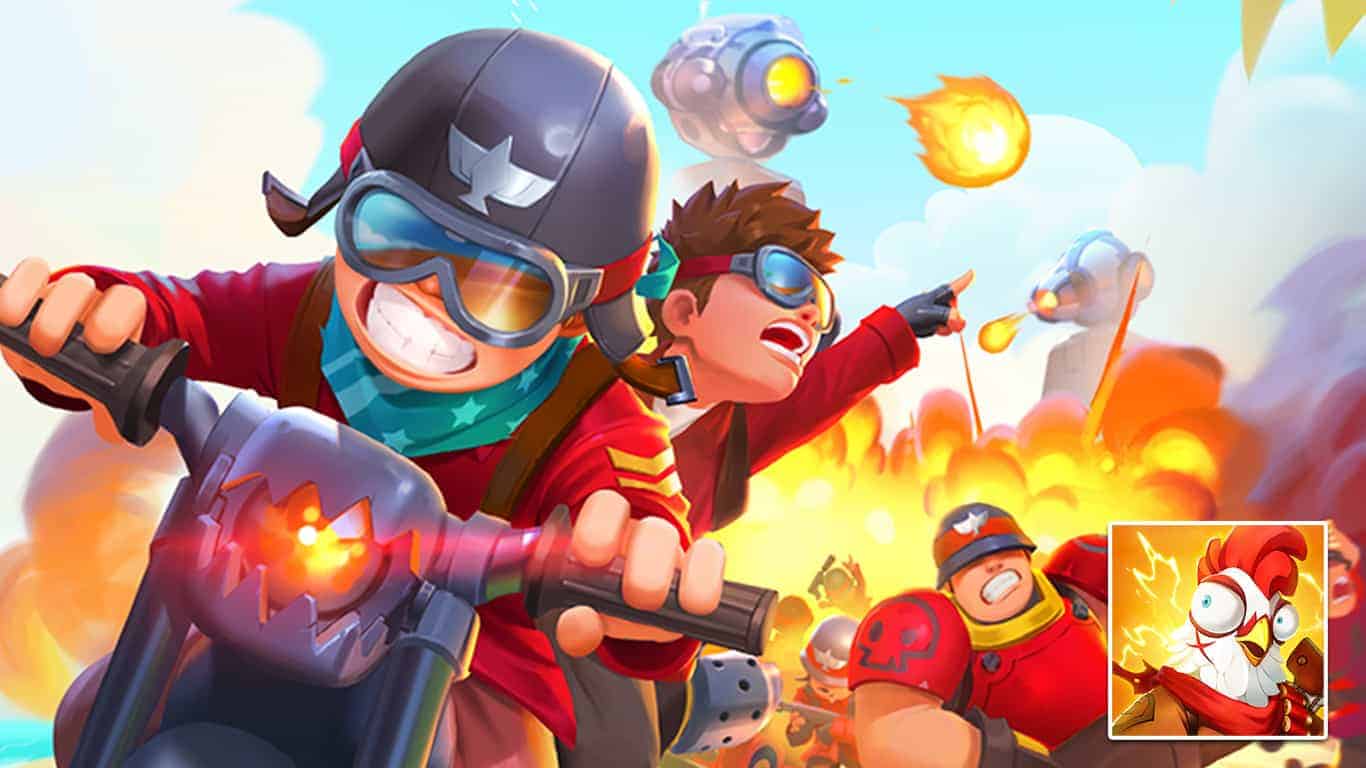 The game’s simple yet exciting gameplay paired with excellent graphics makes it suitable for the casual player and the TD enthusiast.

To beat levels of enemies and bosses, you have to build strong turrets and place them optimally.

There are several different types of turrets for you to build, all of which you’ll need if you wish to reach the highest levels.

In this guide, we give you tips and tricks to beat tough levels and progress through the game.

Rooster Defense is available on Google Play and the App Store in some countries.

Rooster Defense is a tower defense mobile game, a genre in which the player builds turrets that defend against waves of enemies and bosses.

Your job is to take out these enemies before they run through the map and make it to the golden egg.

The game combines the tower defense genre with a merging element, which means you need to merge turrets to upgrade them.

Throughout your journey in Rooster Defense, you’ll unlock more turrets, turret slots, and other boosts that’ll help you beat levels.

Levels with regular enemies start automatically, and boss levels, which are every five levels, only start when you press the boss button located below the level menu.

Defeating enemies and bosses give gold, which you can use to purchase more turrets.

Bosses are, of course, more difficult to defeat than regular enemies but do give useful rewards.

If you can’t defeat a boss, you can keep doing the level right before it to farm up some gold to get better turrets.

Another tactic for defeating bosses is to switch up your turret setup, which we’ll go more into details on this later in this guide.

In Rooster Defense, there are four overall types of turrets.

We recommend you use all four types in your turret setup to optimize your chances of beating levels.

You can obtain better versions of the same type of turret by collecting cards from boxes and eggs.

Only one version of each turret type can be active at a time, though.

To change the active version of a turret type, go to the Turret tap in the bottom left corner.

Here is an overview of the four overall types of turrets in the game.

The gun turret is a powerful single-target turret with high damage and fast attack speed.

This turret type is great for taking out both enemies and bosses.

Gun Turrets will act as damage-dealing turrets that deliver a solid output, but don’t come with any utility.

Being the first turret you can build in the game, the gun turret type servers as a stable in your setup and should be included.

Here are all the different versions of the gun turret you can get in the game.

The toxic turret type damages a single enemy at a time and applies a toxic effect that deals damage over time.

Toxic turrets’ attacks are not what makes them powerful. It is their damage over time effect.

Especially against enemies that have a lot of HP like bosses, toxic turrets are amazing.

Toxic turrets are weakest against very fast enemies that quickly rush through your maze.

Even though it might not seem like toxic turrets are doing a lot, we highly recommend them against bosses and tanky enemies.

Toxic turrets should be placed close to the spawn of enemies so their toxic effect can deal damage for a long time.

Here are all the different versions of the toxic turret you can get in the game.

The ice turret is a single-target attacking turret that applies a useful slow to enemies.

As the ice turret is mostly for utility, they don’t have as great a damage output as other turrets.

Their slow effect is, however, irreplaceable and required to beat many levels.

To best utilize the ice turret, you should place it right next to the spawn of enemies so you can slow them as quickly as possible.

Here are all the different versions of the ice turret that you can get in the game.

The bomb turret is your classic AoE turret that damages multiple enemies at once.

As the bomb turret is for AoE, it attacks rather slow, but with quite high damage.

Against levels with multiple enemies, you need to have at least one bomb turret.

An excellent tactic is to place a bomb turret after an ice turret, allowing the bomb turret to attack the same enemy multiple times because of the slow effect from the ice turret.

Here are all the versions of the bomb turret you can get in the game.

If you’re struggling to beat a level in Rooster Defense, try to change your setup.

Even if you use the same number of each type of turret, just changing each turret’s position can have an impact on the result of a level.

If you face a boss, for example, try to place your ice turrets and toxic towers right at the beginning of the map.

This will instantly slow down the boss and apply toxic tower’s damage over time effect, which will now have more time to deal damage throughout battle.

Likewise, if you face a level with a lot of enemies packed up tightly, try to place multiple bomb turret right at the beginning to quickly burst down their hp.

You can then place gun towers later on the map to finish them off.

A more advanced strategy you can utilize if you’re stuck on a level is to move turrets mid battle.

By moving turrets mid battle, you can ensure enemies or a boss always has debuffs like slow and toxic on it throughout battle.

As soon as your ice turret and toxic turret has applied their debuff, switch them out with gun turrets or bomb turrets.

Doing this will ensure the highest damage output in battle, but does require a bit of practice.

How to get parts and turret cards

To upgrade turrets in Rooster Defense, you need parts and cards of that turret.

To unlock a new version of a turret, you just need to pull at least one card of that version.

You get cards by opening chests obtained from defeating bosses or by opening egg chests.

There are two kinds of egg chests, the free and the classic.

Free chest eggs require you to watch one ad to open.

You get parts by opening chests from bosses, opening chest eggs, or by purchasing them with gems in the shop.

While progressing through the game, the auto fusion feature can be of great help.

While auto fusion is active, turrets in your building grid will automatically fuse, saving you time.

Especially after you haven’t played the game for a while and have racked up offline earnings, the auto fusion feature comes in handy.

You can activate the auto fusion feature by pressing the Auto Fusion button on the left side of the screen.

Activating auto fusion requires that you watch one ad, after which it will be active for ten minutes.

With these tips and tricks, you are ready to take on the world of Rooster Defense.

Hopefully, you are better suited for tough levels and can progress faster because of this guide.