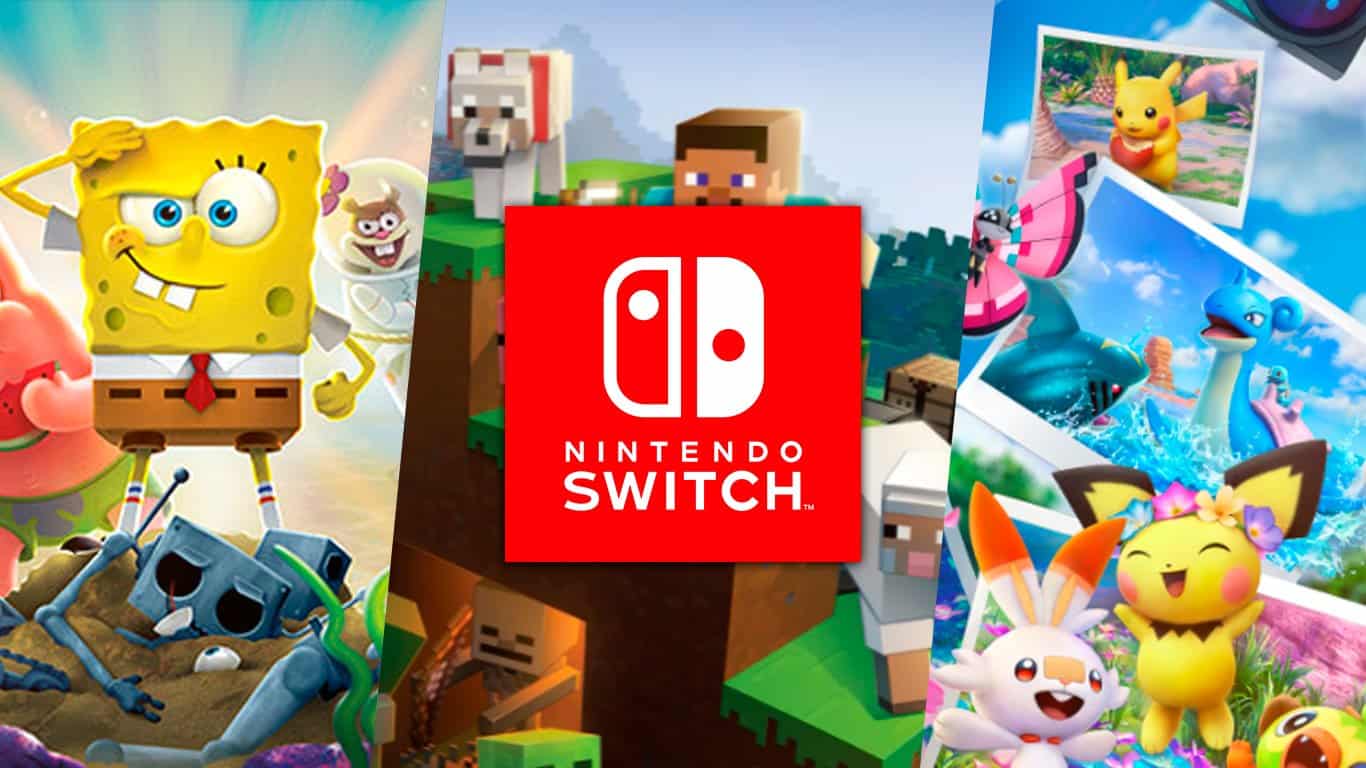 The Nintendo Switch has quickly become one of the world’s most popular gaming devices.

The appealing range of bright colors and the option to play on your tv make the console a great option for keeping kids entertained.

You can also choose to download the games to the device, removing the need to have cartridges all over the house.

But with such a wide range of games to choose from, how do you know which ones your kids will enjoy the most?

In this list, we give you some of the best Nintendo Switch games for younger children to play. And we’ll just say, you, the adults, will most likely also enjoy playing these games.

You can even play some of them with your children through multiplayer, ensuring an entertaining night for both you and your kids.

The release of Animal Crossing: New Horizons in March of 2020 quickly became a big hit for Nintendo.

Many avid fans were eagerly awaiting the release of the latest installment in the Animal Crossing series.

The new design and island theme were a roaring success with players all over the world.

Animal Crossing: New Horizons is an open-ended game that lets you create your very own virtual island.

You are introduced to the island’s founder Tom Nook, who then encourages you to play, develop and create.

The game requires you to collect fruit, shells and even go fishing.

Anything that you can collect can then be sold to earn the in-game currency “bells”.

These bells allow you to save and pay off your mortgage in the game, allowing you to remodel your house until it is as big as the game allows.

You can also purchase items in the game’s store and buy clothing from the tailor’s shop.

There is no end goal to this game but reaching a five-star island rating is highly encouraged.

This very wholesome game helps to develop your aesthetic taste by crafting items from collected materials, planting flowers, and dressing up your island’s inhabitants.

Minecraft has been one of the most popular online games for years now.

The simple concept of the game has meant that it is suitable for all players and can be adapted to meet all needs.

You can choose to make the game as simple or as complicated as you want.

Just like with Animal Crossing: New Horizons, Minecraft offers you an escape into another world.

Minecraft works by creating a fictional universe from building blocks.

Each item in the game is broken down into single units, a block. These can include anything from grass to flowers.

This is also an open-ended game where you can create anything that you like.

You can build houses, explore caves and even just roam the landscape.

Though the game can be enjoyed however you want, there is an end-goal of the game, defeating the ender dragon.

If you manage to defeat the ender dragon, don’t worry, your game won’t end. You can keep playing in the same world.

For those who don’t want to deal with dragons nor zombies, the game can be played on peaceful mode where there are no threats.

You can explore the world, build structures, or make farms, which makes peaceful mode a great option for children who like the exploration and building aspect of Minecraft but don’t want to deal with battles or survival.

SpongeBob SquarePants has been a beloved children’s cartoon character for many years now, gracing our tv screens daily.

However, now your children can enjoy him on their Nintendo Switch by playing SpongeBob SquarePants: Battle for Bikini Bottom – Rehydrated.

Your child can now help their favorite cartoon character save the town from the evil Plankton and become a hero.

In the game, you choose to play as any of the fantastic characters from the show.

You can become SpongeBob, Patrick, or Sandy and use their skills to help save Bikini bottom.

The aim of the game is to stop Plankton and his team of evil robots.

You can play both online and offline, and the game even supports multiplayer versions of up to two players.

So, your child can play their favorite game with their friends or you.

Each character has their own unique set of skills that your child can use to help them complete the game.

For example, by playing as SpongeBob, you can throw bubbles at your enemies and curl into a ball in order to roll down hills and pick up speed.

Playing as Patrick allows you to slam down on your enemies and throw giant underwater watermelons at the evil creatures in order to defeat them.

Lastly, Sandy also brings her own unique skill set to the game through her country-style character. She can lasso and capture enemies with her rope.

Throughout the game, you will need to collect shiny objects, which you can then use to trade for desirable items such as golden spatulas and for paying tolls to clam shells in order to advance in the game.

The original voice actors have lent their voices to the characters, meaning that your child can relive all of the magic of their favorite tv program whilst playing the fantastically unique game.

New Pokémon Snap is a reimagined version of the 1999 game.

The idea replaces physically capturing the pokemon to train them for battle with a much more tame and gentle mission: to capture them in a photograph.

The much-loved creatures will leave your child amused for hours with this game.

The general plotline of the game is that you are helping a research assistant to photograph and document all of the pokemon.

These little creatures can be found in all areas: in the sea, in forests, even in the desert.

You will need to interact with them to figure out the perfect shot.

The game encourages repeated play by changing the interactions that you have with the pokemon the more times your visit certain areas.

Once you have taken your photograph of a pokemon, it will be rated out of four stars.

The better and more unique your photo, the higher the rating that you will receive.

The game is a big hit with pokemon fans as it highlights pokemon that have previously been ignored or put only in the background.

The sheer number of interesting pokemon on display that you can interact with makes this game an absolute delight for pokemon fans.

The simple and relaxing concept of the game is suitable for all ages, even the youngest kids.

Based on the Disney cartoon, this game is perfect for children.

Gigantosaurus The Game can either be played solo or with up to four players locally.

The brightly colored game is fun and interactive with its use of movement and sounds.

The aim of each section of the game is to collect eggs.

You can move on from a level once you have collected at least four of the eggs, or you can stay and get them all.

However, there is no overall prize or reward for collecting the eggs, so the game serves more as a distraction for your children.

If they are into the cartoon series or the characters in general, then it will also easily bring a smile to their face.

Based on the 2013 version of Rayman Legends, this Nintendo Switch version brings all of the exciting content, characters, and worlds to the new device.

There are six worlds on offer in this version, each with a brilliant orchestral soundtrack that can actually be choreographed if you complete all of the required moves correctly.

The premise of the game is the basic speed run style game.

You aim to get through the level, collecting items and passing obstacles as quickly as possible.

There are several different gameplay modes, for example, one where Raymond is turned into a duck.

These then affect how you can play the game as it restricts and changes his movements.

Different combinations of buttons open up new moves which can be discovered whilst playing.

The challenge levels allow you to compete against other players all over the world. These are not live but recorded times.

Based on the much-loved Mario series, Luigi’s Mansion 3 takes the secondary character and gives him his time in the spotlight.

This time the setting is a haunted hotel through which your child must work, helping with different tasks each time.

The basic idea of the game is to help rid the hotel of ghosts.

Using the vacuum strapped to Luigi’s back, you must capture and suck up the ghosts, earning points as you do so.

The puzzles on each level become more complex and require more brainpower.

This is where additional characters, such as Luigi’s clone, come in handy.

Their skills allow you to reach places that Luigi cannot, and using special tools, such as the dark mode torch, you can discover secret doors to allow you to progress through the game.

Those are our picks for the best Nintendo Switch games for younger children.

Do you know of any Nintendo Switch game that you think others should have their children give a try? Let us know in the comment section below.

7 Best Battle Royale Games to Play On the Nintendo Switch