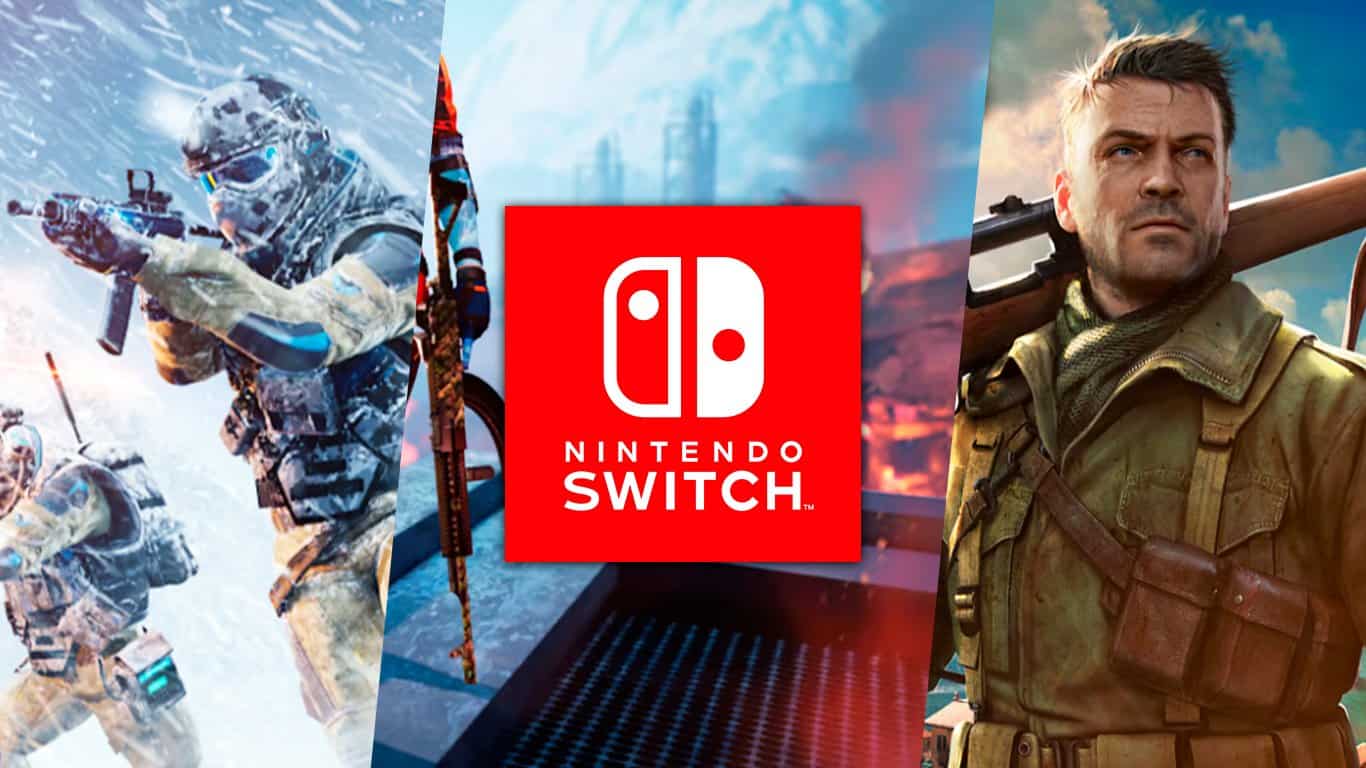 The series popularized many now common aspects of FPS titles, such as sliding and unlockable weapon skins.

If you’re a fan looking for a similar guns-blazing experience on Switch, then you’re in luck.

Several comparable titles are available that are just as exhilarating as the classics.

In this guide, we’ve picked the seven best games that are like Call of Duty you can play on Nintendo Switch.

Warface provides a refined, classic FPS experience that Call of Duty and Battlefield fans will love.

Players can choose one of five classes with unique abilities and weapons.

The more you play the game, the more powerful weapons and unique armor you can unlock.

If you’re a fan of fighting in style, Warface has a very in-depth customization system.

Pieces of armor both affect your appearance and give you stat boosts that can change your playstyle.

Warface also does an excellent job of making you feel like you’re in the middle of a massive battle.

The settings are realistic, and the gunplay delivers constant action mixed with team tactics.

You can break down the gameplay into two main areas: Co-op and PvP.

Co-op mode puts you in a team with five other players and assigns you dangerous tasks to complete against NPCs.

Meanwhile, PvP in Warface is much like the classic Call of Duty multiplayer experience.

In addition to team deathmatch and free-for-all, there’s a mode called “Plant the Bomb” that’s similar to Call of Duty’s “Search and Destroy.”

So if you’ve been looking for a shooter to give you the Call of Duty experience on Switch, Warface is it!

You play as one of several rogues that pack unique weapon loadouts and special powers.

These characters are full of life and personality, often dropping hilarious one-liners in the heat of battle.

The rogue, Ronin, is especially a blast to play, dashing through enemy lines with her katana and explosive throwing knives.

The game pits players against each other in two teams of four across numerous modes.

One of the most popular game types is Demolition, which resembles Search and Destroy from the Call of Duty series and Counter-Strike.

In it, players must plant a bomb on one of the other team’s two bomb sites or defend their own sites.

If one of your teammates gets downed, don’t worry – the game has a revive mechanic to help get your buddies back in the fight.

There are also cosmetics galore in this title. You’ll never run out of cool new skins and emotes to grind for.

Thanks to its high-octane gameplay and team-based strategy, Rogue Company is the perfect FPS to play with friends.

Overwatch takes the high-octane gunplay of Call of Duty to the next level with a cast of vibrant characters.

In this game, two teams of six players take each other on in objective-based game modes.

Overwatch lets you play as one of its dozens of Heroes with unique and stunning abilities.

One of our favorites is Winston, a giant talking Gorilla who leaps into battle with a lightning cannon and bubble shield.

But there are other unforgettable characters, too – such as Lúcio, who heals and speeds up his teammates using the power of music.

These heroes add an extra layer of strategy to the game.

Because to achieve victory, you’ll need a balance of damage, support, mobility, and defense.

Many characters synergize exceptionally well, making up for weaknesses and bolstering strengths.

Furthermore, the maps in Overwatch are downright breathtaking.

They’ll whisk you everywhere, from medieval German castles to frozen temples in the mountains of Nepal.

Overwatch also offers numerous skins for players to unlock for their Heroes.

And even better, the game gives you plenty of loot boxes for free!

So as long as you keep playing and leveling up, you’ll keep getting quirky and cool cosmetic rewards.

Overwatch is not free-to-play on the Switch like it is on the PC.

Hoverboards, space ninjas, and an endless array of futuristic weapons – Warframe has it all!

This title was released back in 2013, but it has received constant updates and reworks to keep it entirely fresh.

You play as a Tenno, one of an ancient warrior race awoken from centuries of sleep on Earth.

Without giving too much away, you’ll have to take on giant robots, deranged human clones, and disfigured monsters.

To help you to this end, you equip Warframe battlesuits that provide an array of incredible combat skills.

Some Warframes let you control magnetic forces and ragdoll your opponents.

Meanwhile, others give you the power to release explosive spores that spread between enemies.

Not to mention that the game is in third-person, so you can appreciate just how awesome your armor looks.

Like Call of Duty, this game has a huge emphasis on mobility.

However, Warframe takes it up a notch by adding platforming and a hoverboard that’s incredible to ride.

You can even perform hoverboard tricks and combos for points like a skateboarding game!

With its blend of gameplay styles and dazzling aesthetics, Warframe has something for everyone.

If you prefer sticking to the shadows and taking on enemies stealthily, Sniper Elite 4 is the game for you.

This third-person shooter puts you in World War II as a British sniper taking on the Nazi war machine.

But there’s much more to the game than hiding and waiting for your shot.

Figuring out how to accomplish each mission is like a thrilling puzzle, encouraging you to experiment.

In one mission, you’ll need to expertly time your shots with an artillery gun to mask the sound.

While in another, you orchestrate a series of explosions to take out all your targets at once like dominos.

This difficulty removes your HUD and forces you to account for wind velocity in your shots.

Plus, ammo is scarce, and enemies will search for you relentlessly once you’ve been detected.

This mode is not for the faint of heart but provides heart-pumping thrills that’ll make you think more than any other shooter.

And if that wasn’t impressive enough, this title also features gorgeously-realized settings.

Not to mention that there’s a co-op mode, so you can take in the sights and fight evil with your friends.

Each character has their own specialties, with some holding the frontline while others flank from behind.

The primary mode in the game is Siege. In it, both teams of five compete to capture a central point and then escort a payload to the enemy base.

Each successful push or defense of the payload grants a point. The first team to get four points is victorious.

Since teams can only gain the last point offensively, the end of matches often turns into wild and thrilling firefights.

Paladins also introduces an engaging and flexible card system to customize characters and their abilities.

These cards are selected like perks and loadouts from Call of Duty, offering limitless experimentation.

That way, you can counter your enemies’ strategy and alter your playstyle on the fly.

All together, Paladins seamlessly blends FPS and MOBA elements to craft a one-of-a-kind Switch experience.

When Apex Legends burst onto the scene back in 2019, it became an instant classic.

Like Call of Duty: Warzone, this game is a battle royale.

You and one or two teammates get dropped into a giant arena along with dozens of other teams.

Then, a giant shrinking circle will slowly take out anyone caught outside it until only one team remains.

Along the way, you’ll scavenge for weapons and armor to help you fend off other teams.

While that would be exciting enough on its own, this game takes it up a notch with its titular Legends.

Each legend excels in a different aspect of the gameplay.

Pathfinder is a perky robot who can scout out enemy positions with his grapple hook.

Meanwhile, Gibraltar generates shields and calls in artillery strikes when things get hot.

You can find various weapons, armor, and even secret vaults packed with high-tier loot around the map.

Plus, the inclusion of season passes lets you rack up stylish skins for weapons and characters as you play.

It’s the perfect game for those who love Call of Duty: Warzone but want something more vibrant and hectic.

The game is available for free on the Nintendo eShop, but you can also purchase the Champion Edition, which gives you extra skins, characters, and more to start with.

Those are our picks for the best Nintendo Switch games like Call of Duty.

Know of any other great games that you believe should be on this list? Let us know in the comment section below.