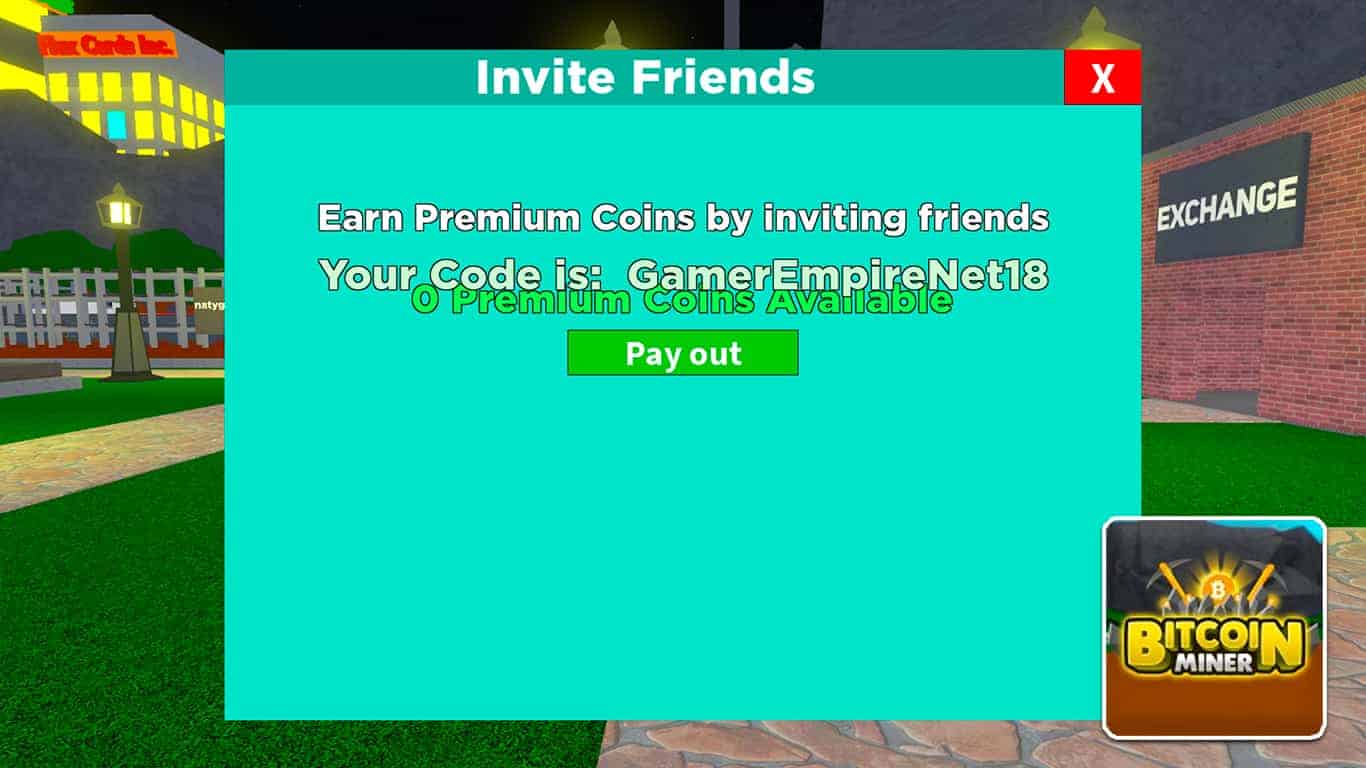 Bitcoin Miner is a game mode in Roblox, in which you build a bitcoin mining farm.

In Bitcoin Miner, you need to earn currencies to improve your mining farm.

You can redeem one code in Bitcoin Miner through the invite friends system to get some premium coins.

After redeeming a code, you can earn more premium coins by sharing your code.

The following codes have been confirmed as being active as of the 15th of April 2021.

You can only redeem one code in Bitcoin Miner, which will give you 10 premium coins, and the player’s code you redeemed will receive 15 premium coins.

The list above features some different players’ codes, including our own.

We add some random players’ code to this list that comments their code in the comment section below.

Redeeming codes in Bitcoin Miner will help you progress faster in the game.

The premium coins you can get from redeeming codes can be used to purchase powerful graphic cards that generate a lot of bitcoins quickly.

To ensure active codes work, type them in, in the exact same capitalization as shown in the list above.

If you notice that any active codes listed above have expired, please let us know in the comments.

All the following codes have previously worked but have now expired.

Codes are generated by players in Bitcoin Miner once they unlock the Invite Friends feature.

We occasionally add new friend codes to this list, so leave your code in the comment section below for a chance of your code being added.

How to redeem codes in Bitcoin Miner

To redeem codes in Bitcoin Miner, open up the game.

Click the ‘INVITE FRIENDS’ button on the left side of the screen.

You will then receive 10 premium coins.

If you do not see the Invite Friends button on the left side of the screen, you haven’t unlocked it yet.

We unlocked it at level 8, but it’s likely that it will appear after you’ve played the game for a specific amount of time.

Codes are special codes generated by other Bitcoin Miner players for other players to redeem.

When you redeem codes, you receive the rewards of the code.

To make it easy for you, weâ€™ve created this codes list that gives you a bunch of Bitcoin Miner codes in one place.

Players of the game can take advantage of the redeem code system to progress faster.

You can only redeem one code in Bitcoin Miner.

How to get more codes

There are plenty of codes being generated for Bitcoin Miner all the time as they come from other players.

We will add random players’ code to this list from time to time, so leave your code in the comment section below for a chance to get yours featured.

Thatâ€™s all the codes we have for Bitcoin Miner!