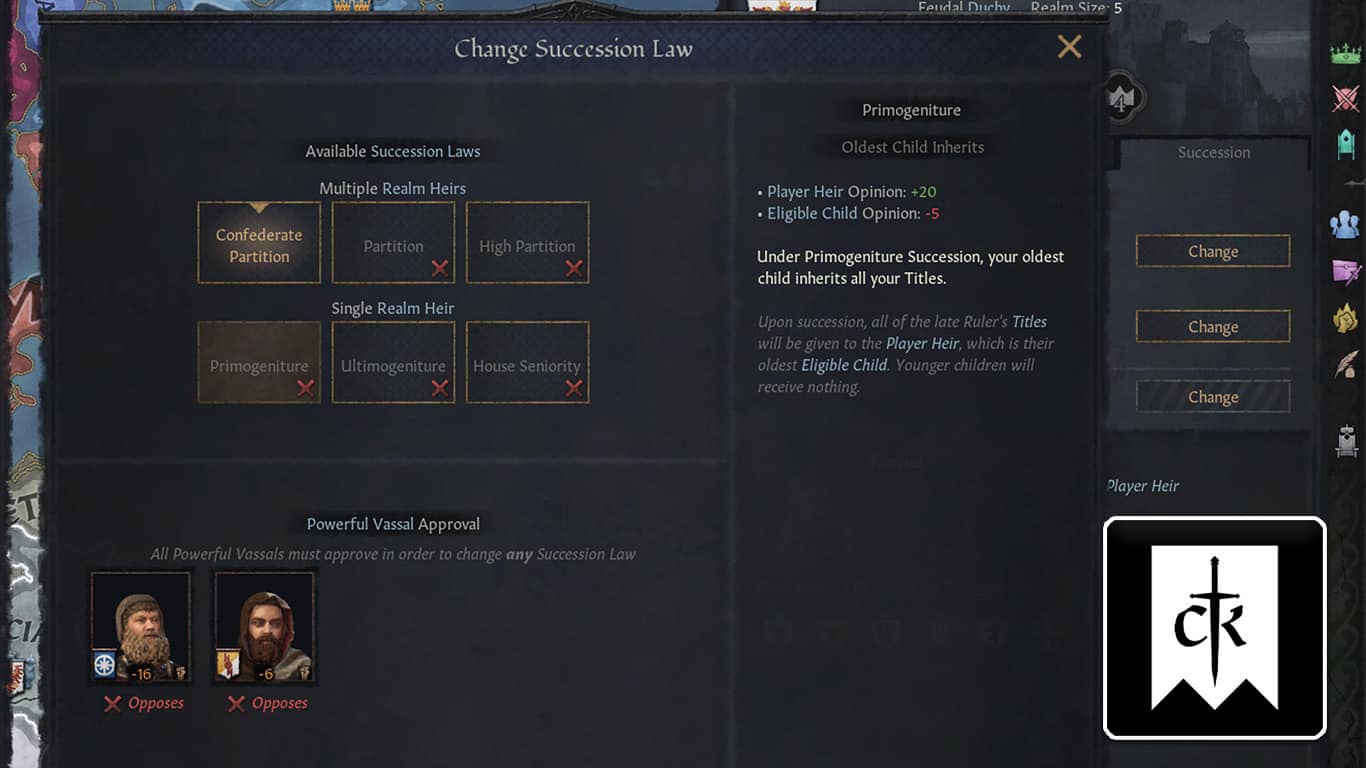 Though Crusader Kings 3 provides us with a lot of fun with our conquests and random events, it also likes to annoy us by destroying our kingdom every time a character dies.

This can get extremely bothersome when you worked hard to unite a higher-tier title (king or emperor), and you have two or three titles of the same rank that get passed around between your children.

Players can just hope for the best when their character dies early, as most of us postpone the preparations necessary to keep our kingdom together.

So, to stop your realm from constantly exploding, here is how you can keep your kingdom together in Crusader Kings 3.

Keeping your Kingdom Together in CK3

There are a couple of things you should do to keep your kingdom together in CK3:

The best way to keep your kingdom together in CK3 is to change the succession law to a Single Heir law.

The Primogeniture, Ultimogeniture, and House Seniority laws make sure that only one person will receive your titles when your character dies, guaranteeing you keep your kingdom together.

The only problem with this technique is that you need to meet many criteria before changing your succession law:

These are very high requirements that can mostly be met in the late game. High Crown Authority should be simple enough to achieve, though.

The Primogeniture Innovation is only available in the Late Medieval era, which starts around 1250, which should be very late for most players.

Also, tribal rulers are locked to always have Confederate Partition, which will always result in you losing all your lands.

Players could also get the High Partition succession law, which will become available in the High Medieval era. However, this will still result in some loss of land.

Your best bet is to get the Partition succession law as fast as you can. This way, there is no way for your children to create new kingdoms out of nowhere and steal all your newly conquered lands.

Give Lands to Eligible Heirs

A way you can make sure you don’t lose lands when you pass away in CK3 is to already give them to your heirs before your death.

If you give your heirs lands equally powerful to the ones they were supposed to get, they won’t receive anything else when you are gone.

You can then make your children lord over every new territory you conquer, and you won’t lose anything in the process.

Though you have to give land in the process and risk a future uprising for the throne, you successfully keep your CK3 kingdom together by doing this.

Another way to make sure you won’t part with any titles is to kill or disinherit your other heirs.

The problem with disinheriting heirs is that it will make you lose all your hard-earned renown, and some characters won’t appreciate being disinherited.

Since most characters can’t plot to kill their own children, you can improvise and hope for the best. To kill your heirs, you need to make sure they are a knight in the army.

The more battles you have, the higher the chance they will die. Unfortunately, if they are particularly gifted in warfare, they do have a chance of just becoming incredible fighters.

Fighting losing battles is the best way to make sure that your knights will die.

You can also just plot to kill your heirs if you have some of the more evil traits, such as Sadistic. This special trait unlocks plots against your own children, letting you control who lives and who dies.

Take a Vow of Celibacy

If you already have a sure heir, make sure you won’t make any new children. You could just kill your spouse and not get married afterward, but you will lose all the bonuses they offer you.

If you take a Learning Lifestyle for a little bit and invest two points into the Whole of Body tree, you can get the Restraint perk.

This perk will allow you to take a vow of celibacy on command and can also abandon it at any time if your heir dies.

This is a very good way to control how many children you have, allowing you to keep your CK3 kingdom together.

Get a higher-tier Title

The last way to make sure you keep your kingdom together in CK3 is to get a higher-tier title.

If you are a grand duke (have more than one duchy title), create a kingdom, and your realm will stay together when you die.

If you are a double or triple king, create an empire. Your goal should always be, if you have more than one title of the same rank on the same level as your primary title, to get the next, higher title.

This way, you can maintain your kingdom together forever. One problem might appear when you start having more emperor titles, but by that time, you should have unlocked the good succession laws.

The only problem that you might stumble into is that if you have the Confederate Partition succession law, your heirs could create new kingdoms even if you haven’t created them.

This means that, even if you only have one king title, if you have enough lands to create another kingdom, one of your heirs will do it and steal the lands from you.

This is why you should make sure that, when you expand, you are ready to get the next titles as fast as you can, to stop your heirs from destroying your kingdom.

That’s everything you need to know about how to keep your kingdom together in Crusader Kings 3!

Crusader Kings 3 – How to Change Culture

Crusader Kings 3 – How to Move Capital