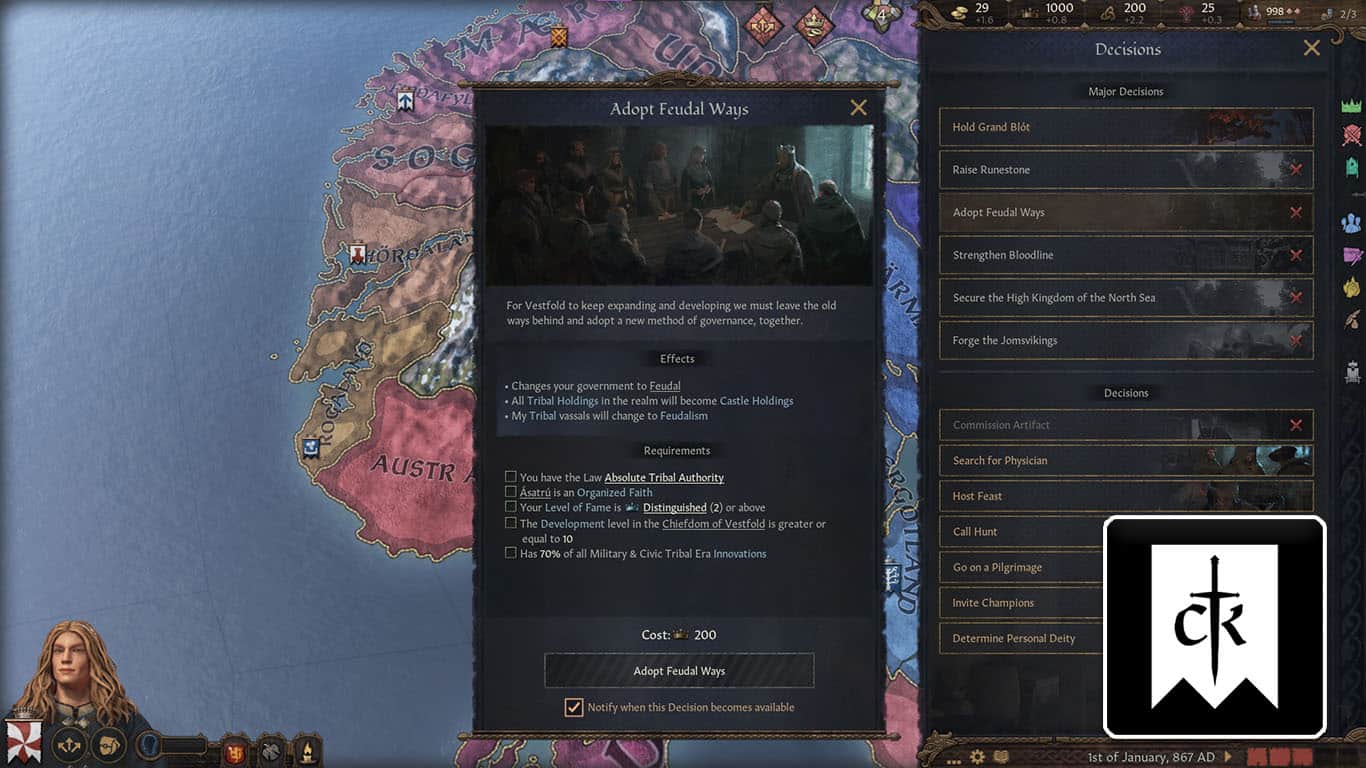 There are three government types players can choose at the start of the game when they select their ruler in Crusader Kings 3: Feudal, Clan, and Tribal.

If you chose the 867 start date, then more than half of the rulers of Eurasia and Africa are ruled by a Tribal government.

Recommended Read: How to Get Piety in CK3

Being Tribal is amazing if your goal is conquering as much as you can. However, at some point, you might start building special buildings and having an amazing economy.

To get all the advantages of a civilized country, you will need to become feudal in Crusader Kings 3. Here is how to do it.

How Tribes Work in CK3

Tribal governments focus more on war and conquest and don’t provide many advantages if you plan to play the more economic or political side of CK3.

Tribes get a lot of buffs that allow them to conquer whole countries in one war (Subjugation Casus Belli), get Men-at-Arms for Prestige, instead of money, and create titles at cheaper prices.

Usually, depending on their religion, tribal rulers can also raid, which is an amazing way to get money and prestige.

However, most of the time, tribes will have an unreformed faith and will not be able to build any type of holdings besides a single church.

Also, depending on the Tribal Authority, tribal rulers sometimes can’t do some of the most basic actions (imprison vassals, titles can’t be revoked, etc.)

Tribes will get the Royal Court that Feudal and Clan governments get when they reach King status, but it will be inferior.

Since you can’t build villages and more churches, tribes become, in the long term, inferior to both Feudal and Clan governments.

This is why most tribes should profit off of everyone’s low innovation at the start of the game and then become Feudal as fast as possible.

So, here is how you can reform to a Feudal government in CK3:

How to Become Feudal in CK3

There is a simple way players can become Feudal in CK3. All they have to do is open the Decisions tab on the right side of the screen and click on the “Adopt Feudal Ways” decision.

To reach the Absolute Tribal Authority Law, you will need to pass the previous laws every 10 years to get there.

You will need to get the Limited Tribal Authority Law when you start the game and slowly progress to Absolute. Your vassal will slowly start to hate you, but you will get closer to the reformation.

The Organized Faith requirement can either be a huge problem or an easy step. If you are already part of an Organized Faith, then you are good. If not, you will have to reform your religion, which will involve you conquering a lot of lands.

For this step, you can also just change your religion if you just want to become Feudal, and getting your Holy Lands is too much of a challenge.

The Level of Fame requirement will be easy to achieve, as getting there should happen even if you want to or not. Since everything tribes to is tied to Prestige, the second Level of Fame will happen if you conquer enough land and create enough titles.

The last one will just take a really long time. Getting 70% of all Military and Civic Innovations is going to take at least 100 to 200 years, so be ready to be a tribe for a long time.

Become Feudal as a Vassal

An easier way to become Feudal in CK3 is to be the vassal of a non-Tribal ruler. If you are, the requirements will be lowered to just:

As you can see, becoming Feudal as the vassal of a non-Tribal ruler is a breeze. As long as you have a reformed or Organized Faith, you can become Feudal almost instantly.

That’s everything you need to know about how to become Feudal in Crusader Kings 3!

Crusader Kings 3 – How to Become a Witch