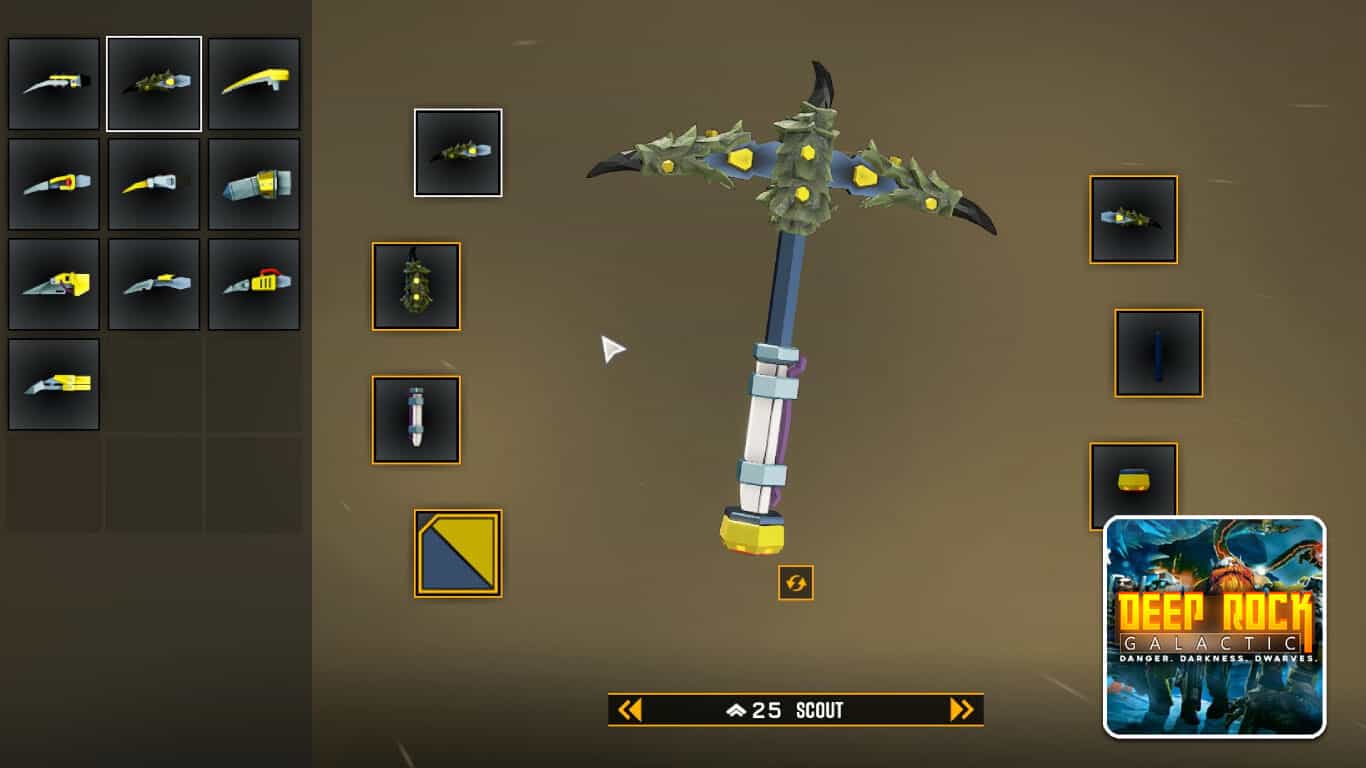 In Deep Rock Galactic, a pickaxe is a crucial tool that allows you to mine the minerals on the Hoxxes planet. Moreover, you can use it to fight the bugs and destroy any terrain you like.

You can do all sorts of things with a normal pickaxe, but have you ever wondered what it will look like when holding a fancy pickaxe in your hand and fighting through waves of bugs?

In this article, we’ll show you how to get pickaxe parts in Deep Rock Galactic!

Recommended Read: How to Get Outside The Space Rig in DRG

There are 3 ways to get pickaxe parts in Deep Rock Galactic. Searching for the Lost Pack (Lost Helmet), doing specific assignments, and buying DLCs. Each method gives a different set of pickaxe parts, so to collect them all, you have to invest in all the mentioned ways above!

How to Get Pickaxe Parts in Deep Rock Galactic

Manually searching for the lost pack will only give you 1 random part at a time. Where doing assignments or buying DLCs will give you a whole set (7 parts of the same set) of a pickaxe.

With the myth of the miners being abandoned on Hoxxes, sometimes you can find a lost helmet lying around in each mission in DRG.

The lost pack has a 15%, 20%, and 35% chance to spawn, respectively, on one, two, and three mission lengths. With that being said, a mining mission with 3 mission lengths is by far the easiest one to find the lost pack.

Like cargo crates, the lost helmet will play a beeping sound but at a slower rate. Use the sound to locate the helmet and scan it to reveal the hidden treasure, which is a pink star that appears in your Terrain Scanner.

If your team has a Driller, it will be much easier to dig to the treasure. Otherwise, it will be a huge pain to dig through a long tunnel. Especially if you’re in Radioactive Exclusion Zone or Magma Core biomes.

When activated, the Lost Pack can give you one of the following items: armor paintjobs, pickaxe parts, and a Bosco’s paintjob. You can get 53 different pickaxe parts through the Lost Pack in Deep Rock Galactic, divided into 7 sets and 4 separate Backblade parts.

You can unlock 4 new pickaxe sets by doing the Pickaxe Hunt assignments. They’re Chasm-Borne Cliffhanger, Gadgeteer’s Favorite, Reaper’s Claw, and Drift Crusher, which can be unlocked at the player’s rank 20, 30, 50, and 70, respectively.

Each assignment contains 4 missions. The first one will always give you a pommel, the second will give you a handle, the third gives you a shaft, and the final mission will give you blades, a head, and a lovely paintjob.

The final way to earn pickaxe parts in DRG will involve some money!

With DLCs, you can unlock the final 7 pickaxe sets of the game. They’re MegaCorp, Roughneck, Dawn of the Dread, The Supporter, Rival Tech, Robot Rebellion, and Biohazard pickaxe.

All of the DLCs cost $7.99, except for the Supporter, which will cost $14.99 because not only does it adds a weapon framework and new paint job for armor, weapons, and pickaxe, but it also adds a new beer, one new helmet, and a supporter badge which will display near.

Those are 3 ways to get pickaxe parts in Deep Rock Galactic!

Let’s pick your best pickaxe and squeeze out the resources from Hoxxes!