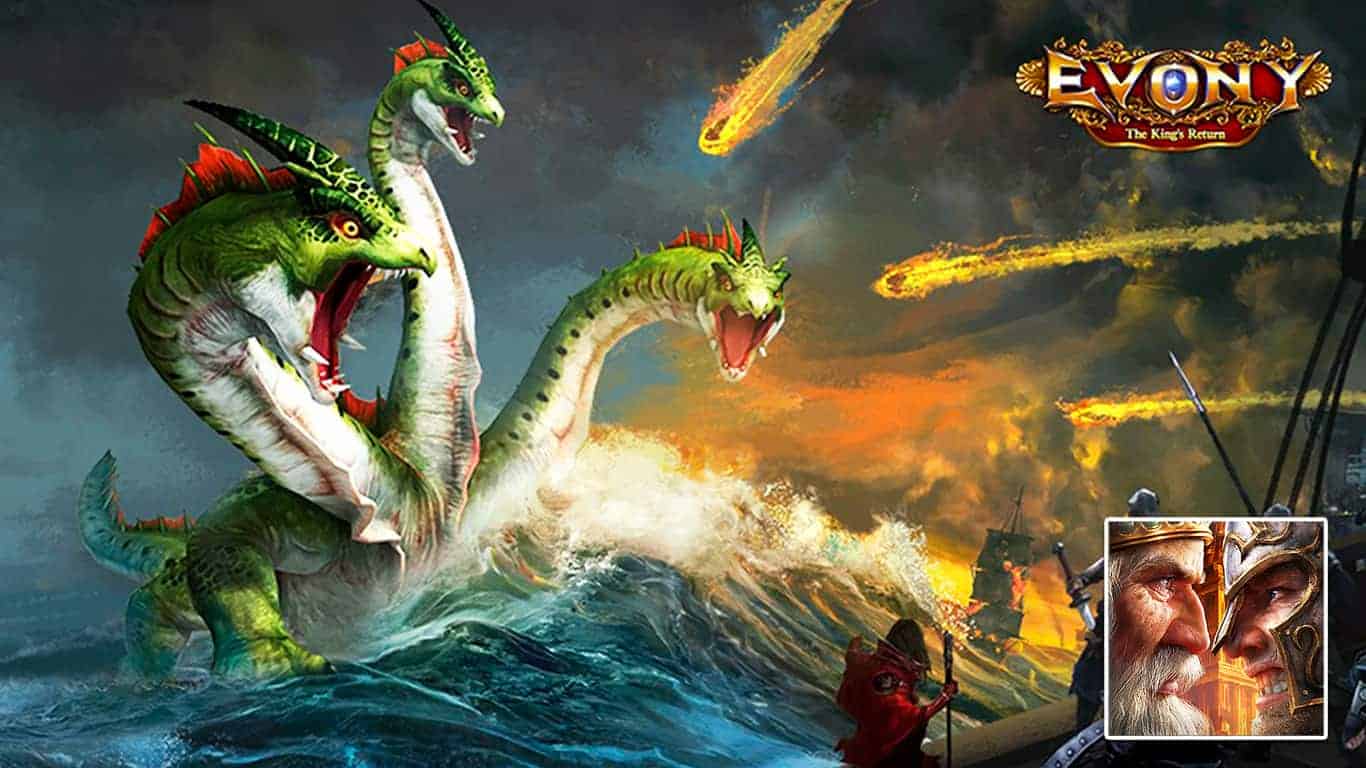 Evony: The King’s Return is a civilization empire creator in which you command troops, build up an army, create a civilization, and become the king of your empire.

The game is a real-time strategy massively multiplayer online game where other players will either be your ally or your enemy.

At the start of the game, you can choose between 7 civilizations to customize your empire’s architecture – American, Chinese, European, Russian, Korean, Arabian, and Japanese.

Furthermore, the game allows you to recruit famous generals and leaders such as Charles the Great, Julius Caesar, Genghis Khan, and many more.

Evony: The King’s Return has a plethora of troops and buildings at your disposal to crush or make amends with your foes.

You can manage resources and research certain improvements that will benefit your empire and your army.

The game features an exciting multiplayer aspect where you connect with individuals from around the globe.

This system makes multiplayer gameplay accessible and easy to coordinate with others.

Evony: The King’s Return is available on both Google Play and the App Store.

Like many strategy games, Evony: The King’s Return has the player go through stages of constructional development.

The game’s main objective is to develop a powerful base, unlock upgrade, raise an army, and conquer the land.

To help players gain resources to upgrade their troops, city, etc. you can attack other players and get resources.

Taking advantage of the multiplayer system allows players to build a strong alliance that’ll help you in your quest to expand your kingdom.

Buildings are an important part of Evony: The King’s Return, as they improve your empire, allow you to build stronger troops, make you gain resources faster, and more.

Some requirements may also have to be met before you can upgrade certain buildings, including a minimum level of other buildings.

The higher level the building is, the stronger it is, and the more resources it generates.

Here is an overview of some of the most important buildings in the game.

Arguably the most important buildings is the Keep.

The Keep is the giant castle building in the center of your empire.

Your Keep will always be higher level than all of the other buildings.

To upgrade buildings that have reached the same level of your keep, you have to level up your Keep first.

The keep allows you to unlock new buildings and increase your gold levy amount, generals capacity, and subordinate city capacity.

Upgrading your Keep takes quite later in the game, so be sure to start it as soon as possible.

The Wall is a line of defense in front of the city, protecting you from foes attacking your city.

You can do certain activities at the Wall, such as patrolling and collecting gifts.

If you’re struggling with foes taking out your city too easily, then consider upgrading your Wall.

At the Rally Spot, you can increase your march size, which increases your army’s power.

Before engaging in battle, exploring the land, or attacking an enemy kingdom, we recommend you see if you can upgrade your troops at the Rally Spot.

The Academy enables you to research upgrades.

This building is extremely important for progression, as it allows you to increase your power through stronger upgrades.

To progress at a faster pace, you should focus on utilizing and upgrading the Academy.

The Market is where you can buy different resources daily.

Be sure to check out the Market every day for a new selection of resources.

Here, you can also find the Black Market that offers special resources.

The Embassy is an important building as it allows you to accept reinforcement from your allies during an attack on your city.

If your city is under attack constantly, utilizing support from the Embassy can be a solution to your problem.

Research to improve your troops and base

As stated before, research is also an important mechanic of the game, as it allows you to improve your kingdom and become stronger.

In Evony: The King’s Return, there are four different types of research to do.

The more advanced a research type is the more resources they require.

Make sure to have a lot of resources at your disposal before committing to advanced research.

Advancement research allows you to advance buildings such as adding resource collectors.

Defense bolsters your defenses with increases in traps and defense capacity.

Military increases the power of your troops and adds new abilities.

Lastly, Medical Aid helps your troops, revives them, and allows them to survive for longer.

The importance of resources

Collecting and farming resources is an essential part of Evony: The King’s Return.

You need various resources for almost every aspect of the game from upgrading your buildings to training troops.

The main resources in the game are Wood, Stone, and Iron.

These can be farmed and collected at the Farm, Sawmill, Quarry, and Mine.

All of the above-listed buildings are very important as they passively generate resources for you to collect.

You can also get resources through other means, including conquering locations on the open map, taking out enemies, and completing quests.

Resources are immensely important if you want to progress in the game, so be sure to collect your resources often and upgrade resource-generating buildings when you can.

You can find Goblins on the open map, just like any other mob in the game.

Goblins are speical, however, as they drop way more resources than regular mobs, making them great for farming.

Depending on the level of the goblin, you will receive rewards accordingly with higher level goblins dropping more rewards.

Goblins are an important factor in the game as it allows beginners to scale quickly due to their output of gold.

Every player should be in an alliance, as it comes with several benefits.

An alliance is a sort of clan that you form with other players in the game, allowing you to converse with them and aid each other when needed.

You can progress faster when you’re in an Alliance, making it a no-brainer to join one.

A multitude of other benefits such as the Alliance Shop, Alliance Warehouse, Alliance Gifts and more also becomes available after joining an alliance.

Generals are strong characters that lead armies in marches to gather resources, attack monsters and do battle against their enemies.

They can be recruited at the tavern and are Mayors of subordinate cities.

Subordinate cities are unlocked when your keep reaches level 11.

Think of them as outposts, smaller cities that increase your overall power.

They also allow you to gain resources and provide buffs from time to time.

Generals have different rarities to them – Legendary, Epic, Rare, Uncommon, and Common.

Generals have different strengths and weaknesses depending on both the general itself and its rarity.

Generals who have a higher rarity are stronger than those with a lower rarity.

Generals come from different lands and with 4 attributes – Leadership, Attack, Defense, and Politics.

Generals specialize in different attributes, meaning generals will have more stats in certain aspects based on their history.

Depending on the general, you want to send them to do different tasks as some generals are better at attacking than others.

Some generals are also more suited for farming and collecting resources than others.

Each general has unique skills that can provide buffs to your troops, resource gathering, etc.

You can improve your generals by training them and giving them new powerful equipment.

The stats of your general will increase as a result, allowing them to be more powerful.

There are many different troops that you can recruit in Evony: The King’s Return.

You can recruit troops from several different empires including Arabian Knights and Japanese Archers.

Each type of troop comes with both strengths and weaknesses.

By playing the game and advancing through it, you will be able to find what combination of troops suits your playing style.

Depending on where you are in the game, certain combinations of troops and generals will be more preferred than others.

No matter what combination of troops you end up training for a specific battle, we recommend you diversify your army.

We’ve found having a variety of troops work better than exclusively bringing one type of troop.

Here is a list of all the types of troops you can train in the game.

Evony: The King’s Return has a plethora of buildings, generals, troops, and upgrades to explore.

With this guide hopefully, you’ll be able to progress swiftly and have an amazing time playing Evony: The King’s Return.

If you have any tips or tricks for this game that you believe should be included in our guide, let us know in the comment section below.