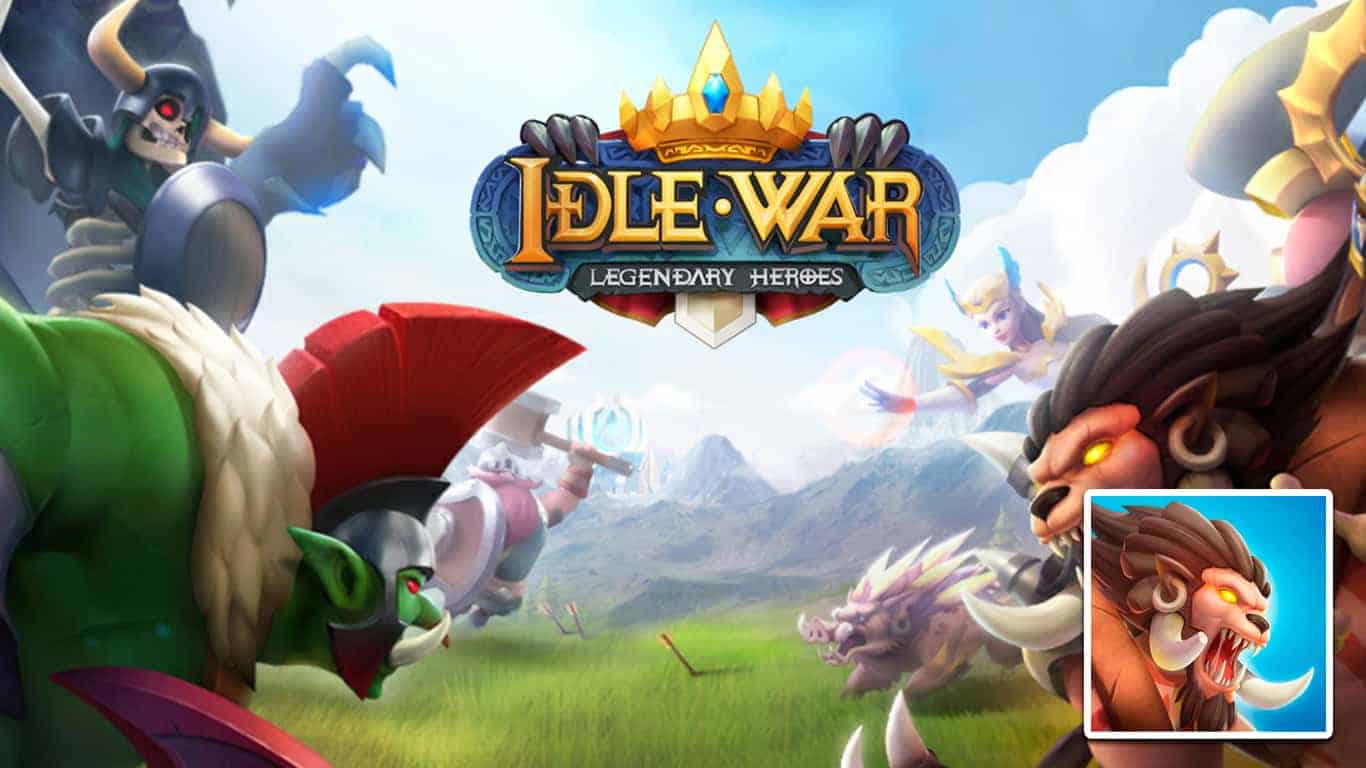 Idle War features a wide range of heroes, each with a unique skillset and gameplay style.

Because of the number of heroes in the game, it can be overwhelming when looking for which heroes to use and upgrade.

Therefore, we’ve created this Idle War tier list, which gives you an overview of the power and potential of heroes in the game.

Some of the very best heroes in Idle War, who will do well on any team and are sure to make you progress faster, include Dainslef, Frost Dragon, Nidhogg, Elementalist, and Nerid.

You can safely start pouring resources into any of these heroes if you pull them, as they will be extremely useful late game.

You’ll find a full tier list with more details on heroes below.

The following tier list gives you an overview of the potential and usefulness of heroes in Idle Wars.

We’re only ranking 4-star and 5-star heroes as they are the ones you want to focus on for mid to late game.

You can use lower rank heroes early on, but you’re going to want to replace those at some point.

Using this tier list, you’ll get a better understanding of how each hero performs relative to the others on the list and therebywho is a better choice when looking to spend resources on upgrading.

This tier list ranks heroes in either S, A, B, C, or D tier. The tier of heroes is excellent to keep in mind when creating a team.

There are, however, other factors to consider as well – learn more about these in our team building guide.

Here is a quick rundown of what each tier represents.

S tier – Heroes in the S-tier are the very best in the game. Because these heroes are so useful, they will do well on any team, and are sure to help you progress through the game faster. You can, without worry, put any S-tier hero on your team and spend resources on them.

A tier – Heroes in the A-tier perform well above average in battle. These heroes will also do well on almost any team, but are not as strong as S-tier heroes. Even though the individual potential of A tier heroes isn’t as great as S tiers, some combinations of A tier heroes might be stronger than S-tier heroes.

B tier – Heroes in the B-tier perform average and are thereby fine to use for your team throughout the campaign. B tier heroes aren’t particularly strong but aren’t weak either. You do, however, want to replace them at some point.

C tier – Heroes in the C-tier perform below average. Their power and utility aren’t the best but can be used at the beginning of the game. You should, however, not spend too many resources on C-tier heroes, as you want to replace them quickly.

D tier – Heroes in the D-tier perform way below average and are not worth spending resources on and upgrade. We recommend you replace D tier heroes as soon as possible.

Any team in Idle War needs at least a couple of attacker heroes to ensure the team has a high enough damage output.

Attacker heroes’ primary purpose is dishing out as much damage as possible so the enemy can’t sustain your team through healing and tanking.

Teams without sufficient damage can find themselves struggling, so consider bringing a couple on your team.

Here are some of the best attacker heroes in Idle War.

Dainslef is an assassin of the savage race with incredible attack stats and complementary abilities.

His special attack, Blink Strike, deals a ton of damage to a random enemy and increases his action points by 60.

Furthermore, Dainslef has the ability to heal himself through his Sword of Rapidity skill, which scales with the amount of damage he deals.

All in all, Dainslef is a well-rounded damage dealer with one of the highest damage outputs in the game.

Elementalist is a mage of the fortress race with powerful magical abilities with a focus on AoE.

Her passive skill, Power of Element, causes her normal attack to hit 4 random enemies at once.

Paired with her main ability, Strike of Element, which damages all enemies, Elementalist is one of the best heroes to take out multiple enemies at once.

Even though other heroes have both skills with higher attack and better attack stats, her total damage output outshines almost every other hero in the game because she hits so many enemies at once.

Elementalist also has a 30% chance to silence enemies when using her main ability and buffs her attack and armor break at the start of a battle for 2 rounds.

Elementalist is, all in all, one of the best attackers in Idle War because of her incredible AoE.

Some players find themselves being taken out very quickly by enemy teams, which is often because they have very little defense on their team.

To solve this issue, bring one or two tank heroes on your team.

These heroes’ main purpose is to tank damage from the enemy team, shielding your damage dealers and supports from being taken out quickly.

Besides tanking damage, some tank heroes deal significant damage if you only have one or two tanks or your team, so consider bringing them on for both tankiness and damage.

Here are some of the best tank heroes in Idle War.

Nerid is a warrior of the fortress race with one of the highest defense stats in the game.

To make Nerid even tankier than he already is, his passive skill Lord of Dwarf increases his HP and parry significantly.

Furthermore, Nerid increases his armor by 10% for 2 rounds when he is hit because of his skill, Last-one-standing.

This skill also has a 50% chance to strike back when hit, making him deal more damage the more hits he tanks.

On top of being able to tank a lot of damage, Nerid heals himself through his skill, Invincible Will, which heals him 6% of his max HP each round.

Lastly, his main attack, Earthshocker attacks an enemy and those around that target dealing significant damage and stunning targets hit at a 35% chance.

Nerid is an obvious choice if you’re looking for more tankiness on your team and, at the same time, want someone who can dish out damage as well.

Mountain Giant is a warrior of the forest race and is another excellent choice if you’re looking for a tank.

Mountain Giant doesn’t have as much base defense as Nerid but does have a better armor buff skill, Rock Armor.

The main ability of Mountain Giant, Earthquake, deals more damage and hits all frontline enemies at once with a 60% chance of stunning.

Lastly, Mountain Giant can heal himself at a much higher rate than Nerid, but can only do so once per battle.

All in all, Mountain Giant is a great tank with high skill damage, a massive one time heal, and great utility in the form of a frontline 60% stun skill.

A type of hero many players underrate in RPG games, including Idle War, is the support hero.

These are heroes who don’t necessarily deal that much damage themselves, nor are they tanky, but they are still incredibly useful because of their utility.

Support heroes’ main purpose is buffing your team and or healing them.

Often, bringing a support on your team has a bigger impact on the entire team’s damage output and survivability than bringing on an extra tank or attacker.

Therefore, you should strongly consider putting one or more support heroes on your team.

Here are some of the best support heroes in Idle War.

Spirit Walker is a priest of the savage race with some of the best buffs in the game.

Even though Spirit Walker himself doesn’t deal a lot of damage, nor has high defenses, bringing him on your team will probably increase the total damage output of your team more than if you chose another attacker.

Spirit Walker’s special skill, Soul Strike, damages all enemies and increases the attack of 3 allies by 15% for 2 rounds.

Furthermore, Spirit Walker increases the power of 2 allies by 10% for 2 rounds each time he attacks.

Because of these two skills, your heroes will have significant boosts throughout the entire battle.

Lastly, Spirit Walker increases the spirit of all allies by 30% for 2 rounds at the beginning of a battle.

All in all, Spirit Walker is an incredibly useful support, who is sure to bring up the total damage output of your team.

Justicar is a priest of the fortress race, who is the other type of support compared to Spirit Walker, Justicar is a healer.

His main skill, Prayer, recovers the HP of all frontline heroes equal to 200% of Justicars attack and increases their parry by 30% for 2 rounds.

Justicar is, therefore, the ultimate support for keeping your tanks, which are usually placed on the frontline, alive.

Not only does he heal them, but he also boosts their parry, which makes them even tankier.

His other skill, Divine Trial, is also a healing skill, which heals all allies 150% of Justicars attack when he falls below 50% HP.

Divine Trial can only be used once per battle.

Overall, Justicar is an amazing support if you’re looking for healing on your team.