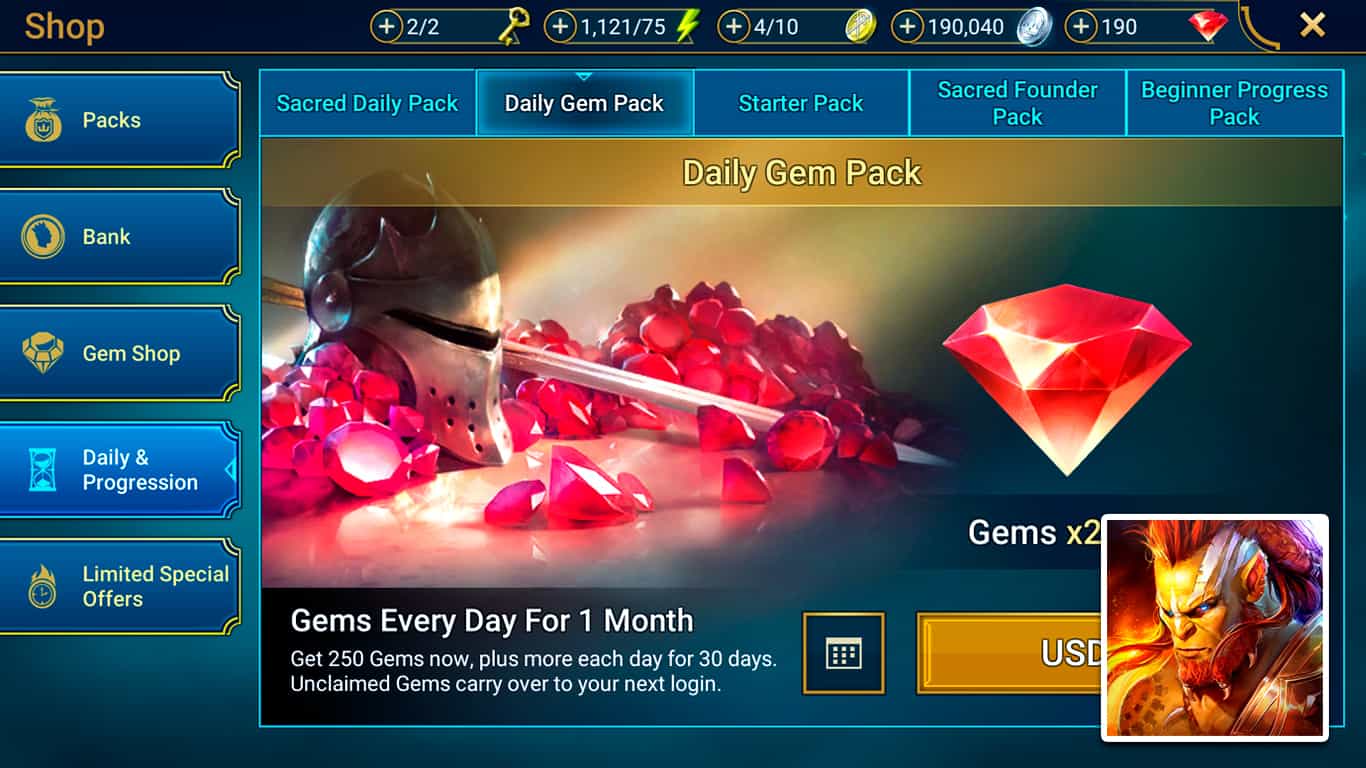 In RAID: Shadow Legends, there are several packs players can purchase to get various in-game items, including shards, EXP buffs, and Gems.

If you’re at a point in the game where you wish to purchase a pack, chances are that you are wondering which one is the best one to purchase.

The best pack to purchase in RAID: Shadow Legends in terms of how much you get for your money is the Daily Gem Pack. If you’ve yet to spend any money on the game, the best pack can be one of the pop-up packs, depending on which one you get – more information on this below.

What is the best pack to buy?

There are a ton of packs to purchase in RAID: Shadow Legends, but not all of them give equal value relative to how much they cost to purchase.

If you’re like most people, you want to get as much for your money as possible, which is why you should aim to purchase the packs that give the most value.

In short, the pack in RAID: Shadow Legends that everyone can purchase that gives the most value is the Daily Gem Pack located in Daily & Progression tab of the Shop.

No other pack that is widely available for all players give as much value for the cost as this one does.

If you have yet to spend any money on RAID: Shadow Legends, you might, however, be able to find a pack that gives better value than the Daily Gem Pack.

After playing the game for just a short while, you’ve probably noticed the many pack-offers that pop up on the main selection screen, the City.

Some of these pop-up packs cannot be found in the Shop after they’ve been closed and can only be purchased then and there.

What special packs pop up for you depend on different factors, including your level in the game and whether or not you’ve spent money before, and if you have how much.

As an incentive to get players who haven’t purchased anything before to make a purchase, the game will occasionally offer very valuable packs from the pop-up.

In terms of what items are best to purchase, packs with lots of Gems are always a safe choice.

Other than Gems, whether you want to find a pack that gives a lot of value with many chicken, shards, or energy, depends on your current situation and needs in the game.

Often, players will get more value from items that seem less interesting, like EXP boosters and energy rather than shards.

If you choose to wait with your first purchase till you get a valuable pop-up pack, be sure to check out the following paragraph on valuing packs in the game.

You’ll also find that information helpful even if you’ve purchased packs in the game before and are planning to purchase more in the future.

How to value packs in RAID: Shadow Legends

Before spending money on any pack in RAID: Shadow Legends, it’s a great idea to value it to see how much you’re getting for the cost of it.

Valuing packs in the game is usually done in terms of Gems equivalent.

In other words, how many Gems a particular pack is worth compared to its cost.

Some packs are easy to value in Gems, as their contents consist only of Gems or Gems and items that can be purchased directly with Gems.

Other items in the game can be priced in Gems based on their cost in the Shop.

Likewise, from the Big Shard Pack in the Gem Shop tab of the Shop that can also be purchased at all times, we can calculate that one Ancient Shard is equivalent to ~75 Gems ((900 Gems-73.33 Gems)/11 Ancient Shards).

If this hypothetical pack came at the cost of 5 Dollars, it would have a value of ~208 Gems per dollar.

Not all items in the game, including Sacred and Void Shards, can be purchased directly with Gems, making them hard to find a Gem equivalent for.

However, you can use strategies like looking at what the odds of a Sacred Shard are compared to an Ancient Shard.

We are not going to give the Gem value of items that cannot be purchased directly with Gems, as these depend on how valuable you believe they are.

For example, a Sacred Shard is 12 times as likely to give a Legendary compared to Ancient Shards but also guarantees an Epic while Ancient Shards don’t.

Furthermore, if a summoning event is running, a Sacred Shard is 24 times as likely to give a Legendary compared to Ancient Shards.

However, one Sacred Shard only gives one champion regardless of its rarity, while 12 or 24 Ancient Shards would give 12 or 24, making it difficult to directly say how much more valuable a Sacred Shard.

Therefore, we are only calculating the Gem value of items that are directly purchasable with Gems at all times in the game in the following list.

Potions cannot be directly valued in Gems, as the Potion Pack contains several types of potions.

Books can be valued in your currency by dividing the price of a book pack by the number of books it gives.

These book packs are located in the Bank tab of the Shop.

Using this method, you can value any pack you are offered in the game by calculating the Gem value of each item and then finding the total Gem value compared to the price of that pack.

If you want to further optimize your spending, consider whether or not you get more value from other purchases.

For example, instead of buying Silver with Gems, you could buy energy and use that to farm the same if not more Silver, and get XP and other items on top of that from the farming.

The more Gem value you get from a pack compared to its price, the better a buy it is in terms of value.

There might, of course, be situations where you just need a specific item, and then a pack that overall has less Gem value compared to its price is more useful to you, making it a better purchase.

The optimal way to spend money

If you wish to spend money optimally in RAID: Shadow Legends, there are three overall tips you should know of.

Firstly, as explained in the paragraph above, the value, how much you get relative to the amount you spend, is not the same for every pack in the game.

Actually, there is quite a big difference between the value you get for your money between some packs.

You want to spend your money on packs that give as much value as possible.

But that’s not the whole story, as the more money you spend on the game, the less value given the cost packs that appear for you will have.

In other words, you get less and less for your money the more you spend, which is good news for those who only plan to spend a bit.

So, if you start spending on the game and notice offers becoming gradually worse, it’s because of that, the value you get from packs are determined by how much you spend, and other factors as well, of course.

Secondly, gear packs are, in general, not a great way to spend your money in RAID: Shadow Legends.

You should rather spend money on regular packs that give Gems, shards, energy, XP boosters, etc.

The reason why you don’t want to purchase gear packs is that there is so much RNG associated with them.

In many cases, at least later on in the game, you can easily end up not using any of the gear you get from a gear pack if you don’t roll the stats you need on them.

Lastly, the packs that are always available in the Packs tab of the Shop are usually never a good purchase, as they offer worse value for your money than most other packs in the game.

Instead, you should look at the packs in the other tabs of the Shop or from the pop-ups in the City.

That’s everything you need to know about how to spend your money in RAID: Shadow Legends, as well as what packs are the best to buy!

RAID: Shadow Legends – How To Get Champions (Every Way)