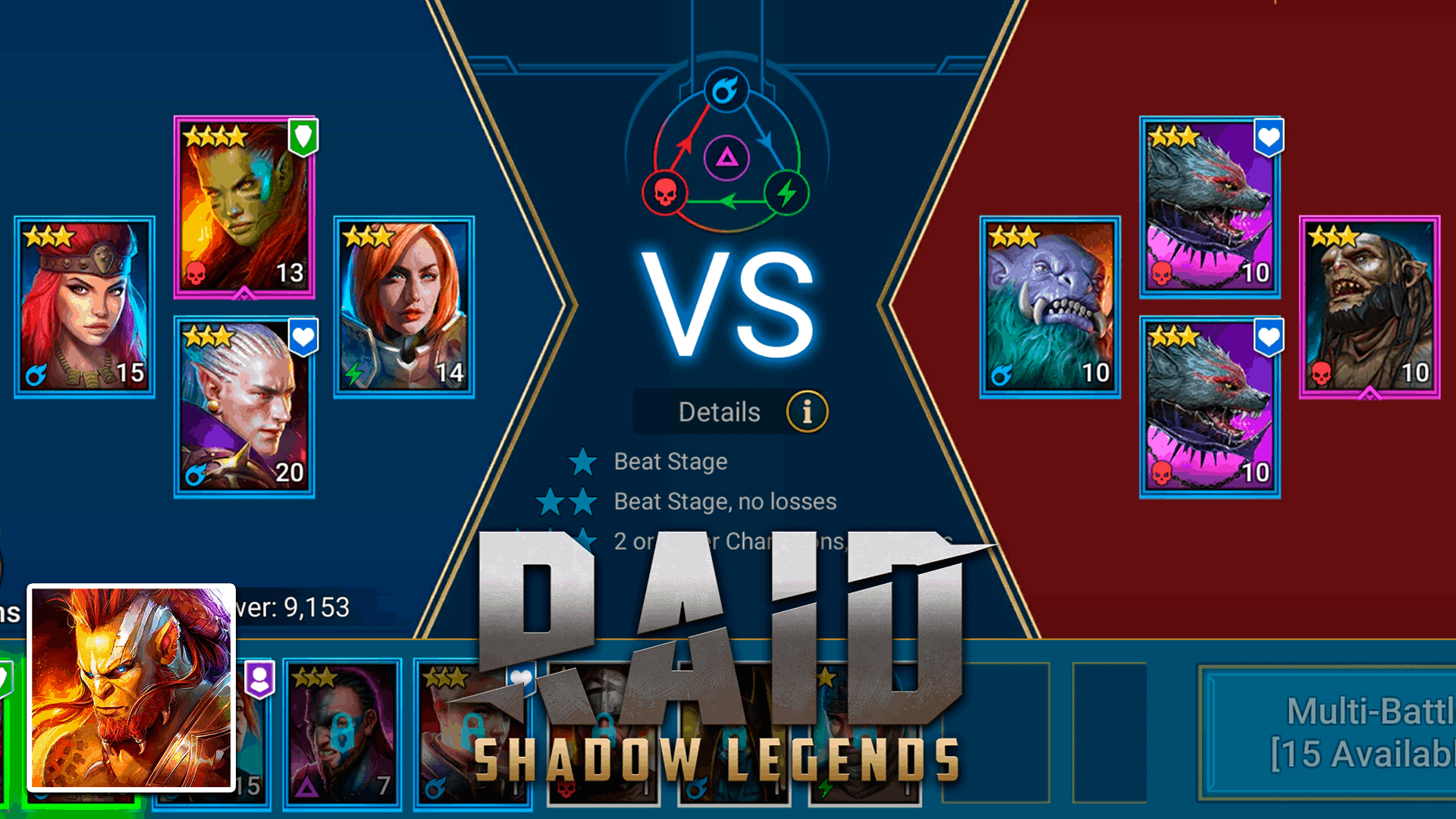 Many factors determine the outcome of a battle in RAID: Shadow Legends.

The game is a turn-based strategy game with hundreds of champions, multiple roles, affinities, and playstyles.

Therefore, chances are you’ll probably face something new each day, even as a seasoned player.

To help players out, we’ve put together this guide on the affinity and combat system.

In the game, there are 4 affinities, Void, Magic, Spirit, and Force.

Void is a special affinity, as it doesn’t have a weakness from any other affinity, nor does it deal extra damage.

Because of this, void champions are more reliable, and therefore often considered the best affinity in the game.

There is even a rare shard, the Void Shard, which only summons void champions and is considered the second-best shard in the game, only beaten by the Sacred Shard.

The other three affinities all deal extra damage to one other affinity, but also have a weakness to the other affinity and thereby take more damage from them.

Here is a breakdown of the advantages and weaknesses of each affinity.

Affinities are assigned a color in RAID: Shadow Legends. We have used the correct colors in the explanation above, but here are the colors associated with each affinity in text form.

You can see which affinity a champion carries by looking at the color of the icon in the bottom left corner of their champion icon or beside their name inside the champions tab.

Kael, for example, has the magic affinity, which you can tell by the blue icon next to his name and in the bottom left corner of his champion icon.

A tip that can help you significantly increase your damage output in RAID: Shadow Legends is to take advantage of in-battle indicators.

When you choose a skill, indicators will appear over the head of enemies before you select which enemy to use that skill on.

There are three different indicators, each with their own color. Here is what each indicator means.

The indicator is a way to help players make decisions based on the affinity power system without them having to memorize which affinities do well against which.

Furthermore, players don’t have to know nor check which affinity a given champion is before choosing which enemy to attack.

With the indicator system, you can easily improve your chances of winning by attacking enemies that are weak against your affinity and thereby increase your damage output.

You can see an example of what these indicators look like in-game on the picture below.

Choosing the right skills in battle has a significant impact on the output and can mean the difference between a win and a loss, especially when you reach a stage where you get stuck.

You might be able to beat it if you play your skills right.

Some new players of RAID: Shadow Legends prioritize damaging skills over buffs no matter what.

Prioritizing damaging skills is understandable, but is usually not the best approach.

Most buffs last for several turns and affect all allies, which in most cases, means the team’s total damage output becomes greater if you use these buffs.

When players get stuck at a specific stage, it is often because their team gets taken out too quickly.

Sacrificing a turn to buff your entire team’s defense or other defensive stat might be the key to beating that stage.

You have to balance the use of defensive and offensive skills, as a tanky team that can’t take out the enemy before they heal back up is no use.

However, from our experience, we’ve always found it worthwhile to use buffs that boost the damage of the entire team.

If you, for example, are fighting a stage with a team of 4 champions, a buff like Bless Weapons is a no-brainer.

Bless Weapons increases the damage of all allies by 25% for 2 turns. That’s a total of 7 damage outputs that have been increased by 25%.

The only scenario where this wouldn’t be worthwhile would be if you had another champion that could deal more damage in 1 turn than the difference between the 7 other damage outputs with and without the 25% boost.

We haven’t found ourselves in a situation like that thus far.

How to get 3-stars in campaign and faction wars

In both the campaign and faction wars, players can earn useful rewards, including shards and chickens, by collecting enough stars.

You get 1-3 stars from clearing a stage, depending on if you meet the set criteria in each game mode.

Because the star rewards are so valuable, playing with these criteria in mind can significantly improve the rate of your progress.

Most players won’t be able to get three stars on a newly unlocked stage because you only are allowed to bring two or fewer champions.

Therefore, you should keep progressing and aim for two stars on each stage.

When you are significantly stronger than a stage you got two stars on, go back, and redo the stage with 2 champions to get that final extra star.

What holds players back from getting 3 stars in each stage in faction wars is the requirement of 5 champions.

In faction wars, you can only bring champions of a specific faction in each faction crypt.

As there are more than 12 different factions in the game, most players, at least newer players, don’t have 5 champions of the same faction.

Therefore, your only choice here is to wait until you get enough champions of a specific faction and then go back and redo the stage.

Learn more in our guide on how to get three stars from stages in RAID: Shadow Legends.

Should you use the auto-battle feature or manually control your team?

In most cases, using auto-battle is just fine as it enables you to catch up on progress or farm with minimal effort.

There aren’t any bonus rewards of any sort to manual play.

However, in some cases, manual play is better than using the auto-battle feature.

If you, for example, are looking to get 3 stars on a stage, manual play can help you to do so.

Because you can’t lose any champions and only use two or fewer champions in the campaign to get 3 stars, you need to mitigate as much damage as possible.

Also, if you are stuck on a level, you might be able to beat it if you play manually instead of auto.

In certain situations, prioritizing healing or defenses might be the best play for later in the stage, which the auto-battle feature might not prioritize.

Therefore, we recommend you try some different strategies on manual if you are stuck on a level with auto-battle.

To maximize your chances of beating a stage in RAID: Shadow Legends, there are some things you should consider when choosing skills and targets.

Firstly, you should always try to follow the in-battle indicators, which helps you take advantage of the affinity system.

Aim to use skills on targets with a green indicator above their head.

You will deal significantly more damage to these targets than if they were yellow and more much than were they red.

You can’t, however, always just blindly follow these indicators as your team getting taken out by the enemy is often the reason why you get stuck on a stage.

To avoid this problem, you can mitigate damage by focusing on the same target, so the enemy quickly loses a damage output per round.

Furthermore, you need to use buffs when they are advantageous.

We went into detail on this subject in an earlier section of this guide.

All in all, attempt to balance using buffs, targeting the same target or the ones with the lowest HP, and take advantage of affinity indicators.

In the beginning, this might be difficult, but you will get the hang of it as you progress through the game.

Now, you are ready to take on those tough stages in RAID: Shadow Legends.

We hope you’ve become a better player by reading this guide.

If you have any input or suggestions for this guide, let us know in the comments below.