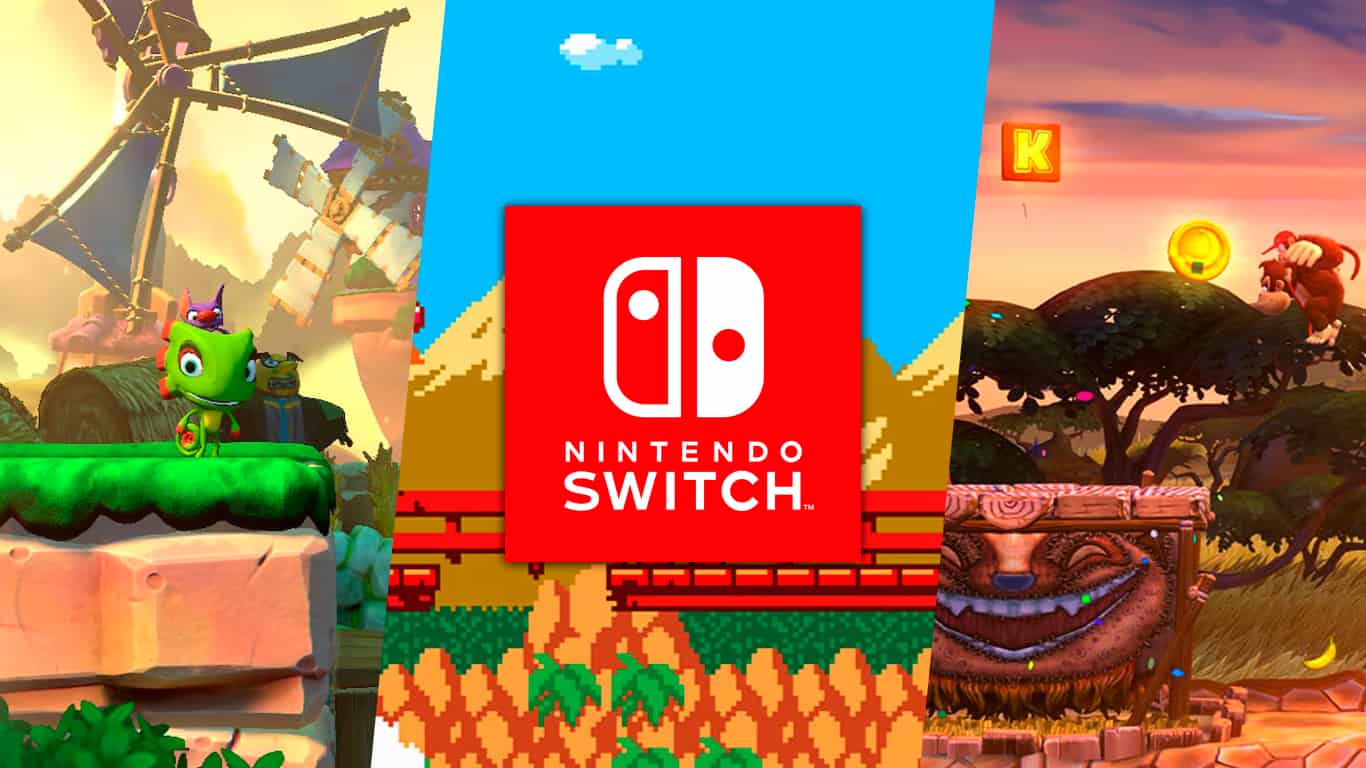 Super Mario Bros has remained a classic title ever since it was released back in 1985.

The simple yet challenging gameplay of the now long series of Super Mario Bros games has fans coming back for more every time a new one is released.

Though it is one of the most-played Nintendo games, there is only one Super Mario Bros game available on the Nintendo Switch at the moment.

Luckily, many games take inspiration from the series, giving you several alternatives to play that are similar.

In this guide, we feature some of the best Nintendo Switch games that are like Super Mario Bros.

The Donkey Kong Country games have been a beloved series of spin-off games from the Super Mario Bros series.

Beginning with the original classic on the SNES, Donkey Kong games continue to bring fun to players around the world.

Donkey Kong Country: Tropical Freeze is no exception, bringing back the gameplay you love with updated graphics and new mechanics.

Help Donkey Kong and his friends take back their home from a group of evil Vikings that have frozen their island.

The controls are like you know them from other Donkey Kong games – smooth and snappy.

You play as Donkey Kong and can have one buddy with you, either Diddy Kong, Dixie Kong, Funky Kong, or Cranky Kong. Each character has their own abilities to help you through the game.

Funky Kong is an interesting guy who uses his surfboard to avoid getting hurt by spikes, which is very helpful in the game.

Donkey Kong Country: Tropical Freeze also features a co-op mode where you and a friend can play together.

If you want a Super Mario Bros-style platformer with lots of action and excitement, check out this title.

Have you ever played a Super Mario Bros game and had an amazing idea for a level? If so, you’ll love this game.

Super Mario Maker 2 is an incredible title for fans of the series, which allows you to build your own Super Mario Bros levels.

Before you start building your own levels, you can enjoy the story mode that centers around Princess Peach’s castle being destroyed. Mario must help rebuild it by playing some built-in levels.

All options you have depends on the Super Mario world you are using, so your items are limited to that one style, but there is still a lot to choose from.

To get you started right, the game features Yamamura’s Dojo, where you can learn all the basics and get tips on how to build your levels.

Super Mario Maker 2 is one of the best experiences you’ll have if you’re a Super Mario Bros fan.

Yooka-Laylee and the Impossible Lair

You might know the original Yooka-Laylee, a platforming game that has a style similar to Banjo-Kazooie.

But here is a Yooka-Laylee title that’ll bring back memories of playing Donkey Kong and Super Mario Bros back in the days – it’s called Yooka-Laylee and the Impossible Lair.

The story follows Yooka, the chameleon, and Laylee, the bat, as they try to stop the evil Capital B from using his mind control device called the Hive Mind. He invites you to join him at his lair, the Impossible Lair, where you will battle him and save the day.

The Impossible Lair is an unforgiving level with no checkpoints. Players can access it any time they want from the overworld, but it isn’t recommended until you have finished the other levels and freed all of the Beetalion.

The Beetalion join you as hit points. There are 48 of them throughout the game. They are your only chance of getting through the Impossible Lair without pulling your hair out in the process.

When you get hit once, Laylee separates from Yooka, and once you get hit again, you lose a life.

Lives are infinite, and checkpoints are plenty in the normal levels. But when you die, you will lose your in-game currency, quills.

The game features a top-down-view overworld that includes puzzles you have to complete to reach each level.

With all this in one package, a Super Mario Bros fan will have a lot of fun in Yooka-Laylee and the Impossible Lair.

View Yooka-Laylee and the Impossible Lair Price on Amazon

Rayman Legends was originally released back in 2013 and is now re-released on the Nintendo Switch to its continuing glory.

The Rayman platformer games date back to 1995, when the first one was released.

The games have continued to be stellar additions to the platforming genre bringing many innovative and exciting elements for players to overcome.

In Rayman Legends, Rayman, Globox, and the Teensies wander through an enchanted forest until they see a tent with some art inside of it.

They look at one painting for a while and then get sucked into it, beginning the adventure of saving the worlds of each painting.

All characters that were available in different versions of the game on different platforms are all here in this game, even with exclusive costumes.

If you’re up for an action-packed platformer, check out Rayman Legends!

Another re-release, the acclaimed Super Mario 3D World, is now on the Nintendo Switch, with an additional game called Bowser’s Fury in the same title.

The original game remains the same, where you can play alone or with friends to get the highest score and earn the crown.

Find Super Bells to become a cat and have unique abilities to help you through the levels.

Bowsers Fury is a more original adventure where Bowser Junior tells Mario that an evil substance has taken over Bowser, and they need to save him.

In the Bowser’s Fury part of the game, you will encounter Bowser raging wildly every few minutes.

It’s going to remind you of the original Super Mario Bros games, just taken to the world of 3D.

Shovel Knight is one of the most critically acclaimed rogue-like platformers of our time.

Beginning as a Kickstarter campaign that far surpassed its goals, Shovel Knight is now a series with multiple published titles.

The several other side games involve the other knights you fought as bosses in the original game.

Shovel Knight: King of Cards centers around King Knight who wants to have his own kingdom.

He plays in a Joustus tournament, seeing his opportunity in the winnings of riches that can give him a kingdom of his own.

The game is a platformer, much like the other games, with King Knight bringing his own set of moves to the table. One of these is a spin attack he can use to destroy blocks that stand in his way.

You will fight the same Knight bosses you encountered in the original Shovel Knight game, and just like in that game, the moves you were learning on the way to the battle will be utilized in said battle.

Joustus is the unique part of this game that is similar to Gwent in the Witcher series, where you can play different opponents outside of the Kings in the tournament.

Shovel Knight is an ideal addition to any Super Mario Bros fan’s library of games.

The Crash Bandicoot is a gaming classic, and this title for the Nintendo Switch is sure to make any Super Mario Bros fan happy!

The game plays in a third-person view and features both full 3D levels as well as side-scrolling parts.

Crash and his companion Coco must fight to stop Neo Cortex and N. Trophy from destroying the multiverse by collecting the four Quantum Masks, bending the rules of the universe.

Crash Bandicoot 4: It’s About Time is a challenging yet exciting game with imaginative and fun-to-play platforming levels to complete.

If you love Mario but also love the nostalgic style of Crash Bandicoot from the ’90s, this game was made for you.

The story centers around a pair of ninja siblings, who are raccoons, taking on other evil animals in their attempt to stop a powerful overlord from dominating the world.

It’s a game in the original retro style that’ll bring forth the nostalgia in anyone who’s played old platformer games.

In the game, you can shoot shurikens at enemies with infinite ammo.

The graphics are reminiscent of early NES titles but with a little more detail and smoother animations that make the game visually pleasing to play.

Tanuki Justice is great for the fan of the old Super Mario Bros games, as well as those who love the retro style.

Those are our picks for the best Nintendo Switch games like Super Mario Bros.

Know of any other great games that should be on this list? Let us know in the comment section below.

What Gambling Site Does m0E_tv Use to Bet?