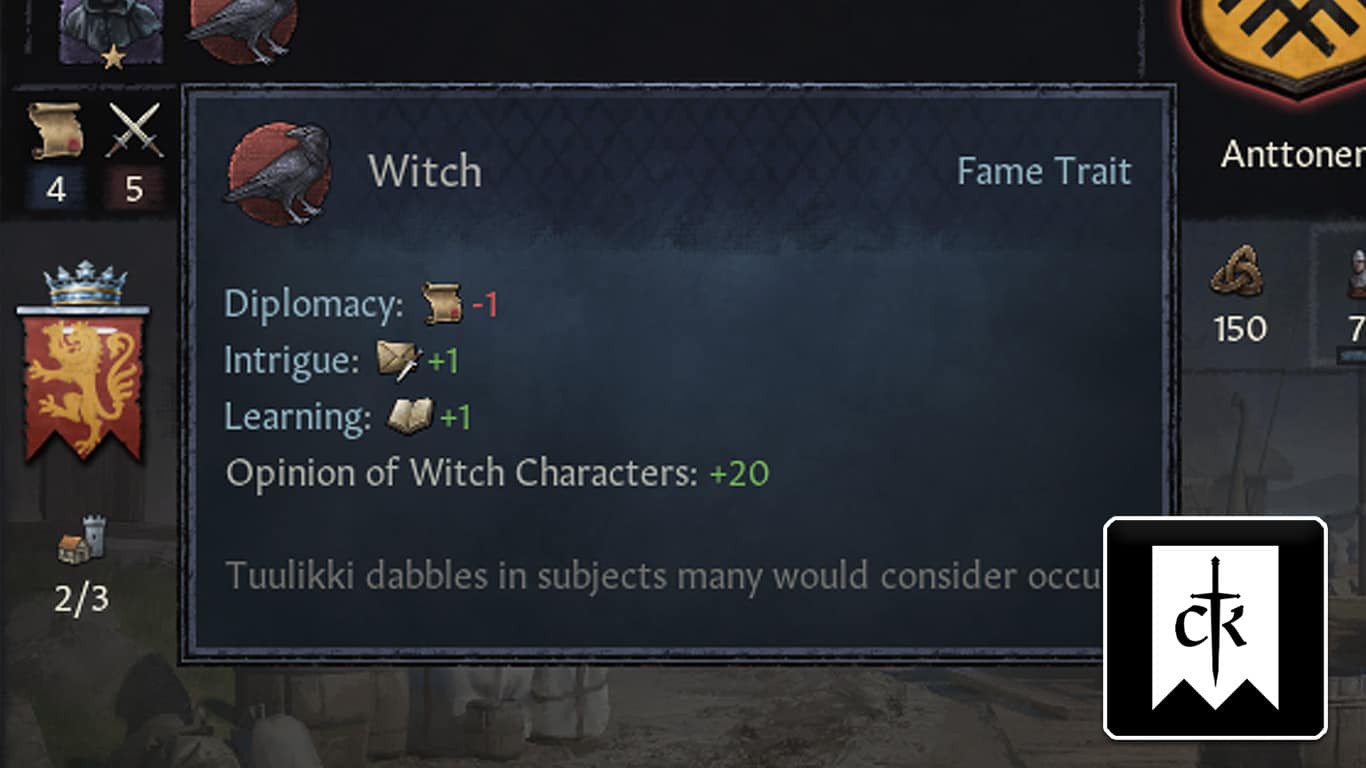 There are many things your character can be in Crusader Kings 3: a Scholar, a Theologian, and even a Witch.

However, out of these three, becoming a Witch is a very complicated feat that can be achieved through sheer luck.

Recommended Read: How to Fabricate a Claim in Crusader Kings 3

Old CK2 players remember how powerful the occult was in the game, and we are sure that you will enjoy the mechanics of the witches in CK3 as well.

To start a covenant and lead a powerful group of occultists, here is how you can help your character become a Witch in Crusader Kings 3.

How a Witch and her Coven Work in CK3

Becoming a Witch in CK3 isn’t as interesting as one might expect. You won’t have supernatural powers, but you will have access to a new decision that will make your dynasty quite powerful.

Witch rulers have the choice to found a Witch Coven. This choice will give all the characters in the dynasty, which are witches, a fertility bonus, a disease health bonus, and power for schemes.

Also, you will be able to host a Grand Rite every few years, which will usually allow you to get a perk for free in your selected Lifestyle tree.

All the witches of the coven will also have the ability to recruit other characters to learn witchcraft.

The only problem with the Witch Coven is that you need at least 60% of your dynasty to be a Witch. This can be incredibly hard if you aren’t at the start of the game.

Becoming a Witch in CK3

There are only 4 ways you can become a Witch in CK3:

If you choose to follow either the Medicine Focus or the Scholarship Focus, you have a small chance of bumping into an event that will give you the chance to become a Witch.

By following the Scholarship Focus, you will have the random choice to become a Witch and oppose the church. This event will only happen if you follow a Faith that rejects witches.

The problem with becoming a Witch in CK3 using these events is that they are random. There is no way to make them happen, which means you can try for centuries and still fail to become a Witch.

If you have a Witch in your court and have high opinions of each other, there is a slight chance that the Witch will try to turn you into one as well.

This event is similar in the fact that it is completely random. All you can do is either get a Witch lover or get a Witch to educate your children in hopes of one of them becoming a Witch themselves.

As you know, when you hit a Mental Break, you sometimes have the choice to bring down your stress by getting a bad trait.

One of the traits that players have a chance of getting when they hit level 2 stress is the Witch trait. Of course, this won’t happen if witches are accepted by your Faith.

Since this one has the biggest chance of actually happening, this is the best way to naturally become a Witch in CK3.

Of course, if you aren’t playing Ironman mode, you can always save before reaching the Mental Break and save scumming until you get the trait.

The last way to become a Witch in CK3, and the one that will work 100% of the time, is to create a ruler that already has the trait from the start.

This is actually the way we would recommend most to play as a Witch in CK3 since this will help you easily convert your dynasty to witchcraft and let you start a Witch Coven from the start.

With the other methods, you have no assurance that you will actually become one.

That’s everything you need to know about how to become a witch in Crusader Kings 3!

Crusader Kings 3 – How to Get Casus Belli