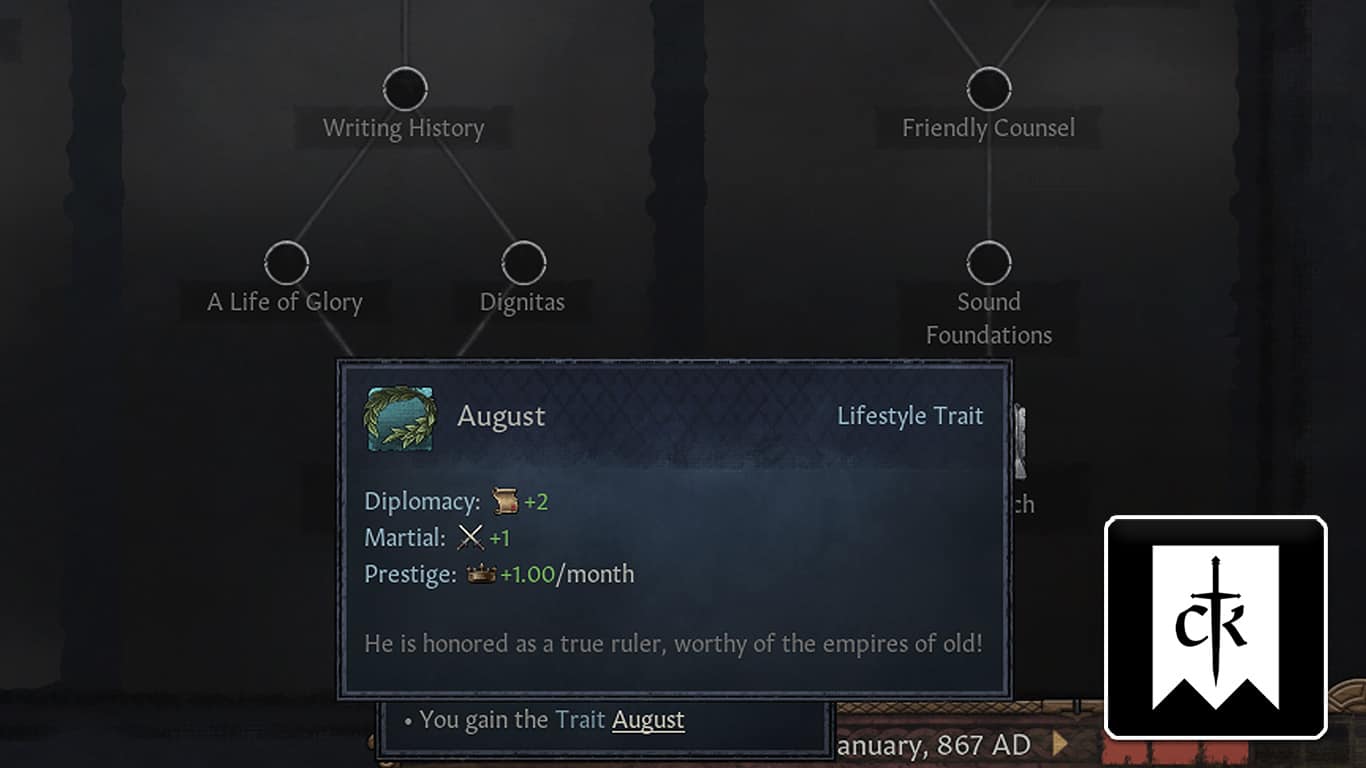 During your character’s lifetime in Crusader Kings 3 (CK3), they will usually only have time to get one or two lifestyle traits.

Lifestyle traits can only be obtained once you finish a lifestyle tree, and these take a long time even with bonuses.

Recommended Read: How to Install Mods in CK3

So, you might be wondering which traits are really worth it and which ones are the best you can get.

Well, we are here to answer your question and tell you which lifestyle traits are the best in Crusader Kings 3.

There are 5 major lifestyle perk trees in CK3, based on the major stats of each character. Depending on what your character learned when they were young, you will usually prefer one lifestyle tree over the other.

You will usually spend all your time learning about one lifestyle based on the education trait that you got.

Since it takes a really long time to complete one of the perk trees to get a trait, you will usually just get one to two traits in your lifetime.

So, because you’re very likely to get traits from all the trees during your playthroughs, here are the best lifestyle traits in CK3 for each stat lifestyle:

Though all three Diplomacy Lifestyle CK3 traits are really good, there is one that stands out: the August trait.

Not only is the August perk tree really good, with the incredible Dignitas perk allowing you to increase your Diplomacy through the roof, but it also has an amazing trait at the end.

The August trait will increase your Diplomacy by +2 and your Martial by +1. It will also give you a flat +1 Prestige per month.

You will also have the ability to increase your Diplomacy to incredible heights using the A Life of Glory and Dignitas perks.

By going down the August path, you will have your most prestigious character yet. Not even a great conqueror can make as much Prestige as a character with the August trait.

When it comes to the Martial Lifestyle traits in CK3, Strategist is by far the best choice.

The perk tree for the Strategist trait will make your armies a lot better and will make your troops win most fights if you give them the right circumstances.

By giving you buffs to all of your men-at-arms’ toughness and damage, you will be able to dominate most confrontations.

The trait itself is also very good. The Strategist trait will give you +1 Diplomacy, +3 Martial, +25% Enemy Fatal Casualties, and will be able to cross rivers and straits without any disadvantages.

The real incredible bonus is the ability to cross rivers and straits without giving an advantage to your enemies. This will allow you to turn around many battles that you should have lost.

No more losses just because your enemy is hiding behind rivers in the hills.

Though the Stewardship Lifestyle should help you make a lot of money in CK3, the best trait you can get is the Architect trait.

With the help of the Architect lifestyle path and trait, you will lower the cost of all holdings and buildings by 15%. Building all of these constructions will also take 15% less time. On top of that, the Architect trait will give you +2 Stewardship.

The Divided Attention perk that comes right before the Architect trait is also incredible, as it will increase your Domain Limit by 2.

You will also increase the popular opinion, allowing you to avoid most rebellions, and you will get a flat +1 Fort Level in all of your realms.

And this is only a small part of the advantages that someone that takes the Architect path and trait will get in CK3.

Anyone who has played an Intrigue-based character knows that the best trait and path in the Intrigue Lifestyle is the Schemer.

By getting the Schemer trait, you will have the ability to successfully accomplish any hostile scheme in CK3 without any worries of failing.

The Schemer trait will give you +5 Intrigue and +25% Hostile Scheme Power.

The Schemer path itself will also give you access to two of the best hostile schemes in CK3: Fabricate Hook and Kidnap.

Fabricating hooks will be incredibly useful to get what you want from vassals or lieges. Kidnapping is the best way to make money in CK3.

By getting powerful lords and ladies, you will make money left and right. With the help of the Schemer trait, you will also successfully kidnap anyone you want.

The Learning Lifestyle might have the most different traits and paths. All of them are very special in their own way and are the best depending on your circumstances.

However, by considering just the bonuses themselves, the Theologian trait and Lifestyle path are the best.

The Theologian trait will give you +3 Learning and will increase your monthly Piety passive income by 20%.

Being a Theologian will also improve your relations with the clergy, which, long term, is extremely useful. You will get more taxes and Piety from this.

You can also convert counties to your Faith faster and easier. And we all know that it is much easier to take care of converted territories rather than hostile counties.

That’s everything you need to know about the best lifestyle traits in Crusader Kings 3!

Crusader Kings 3 – How to Keep Kingdom Together

Crusader Kings 3 – How to Create a Hybrid Culture