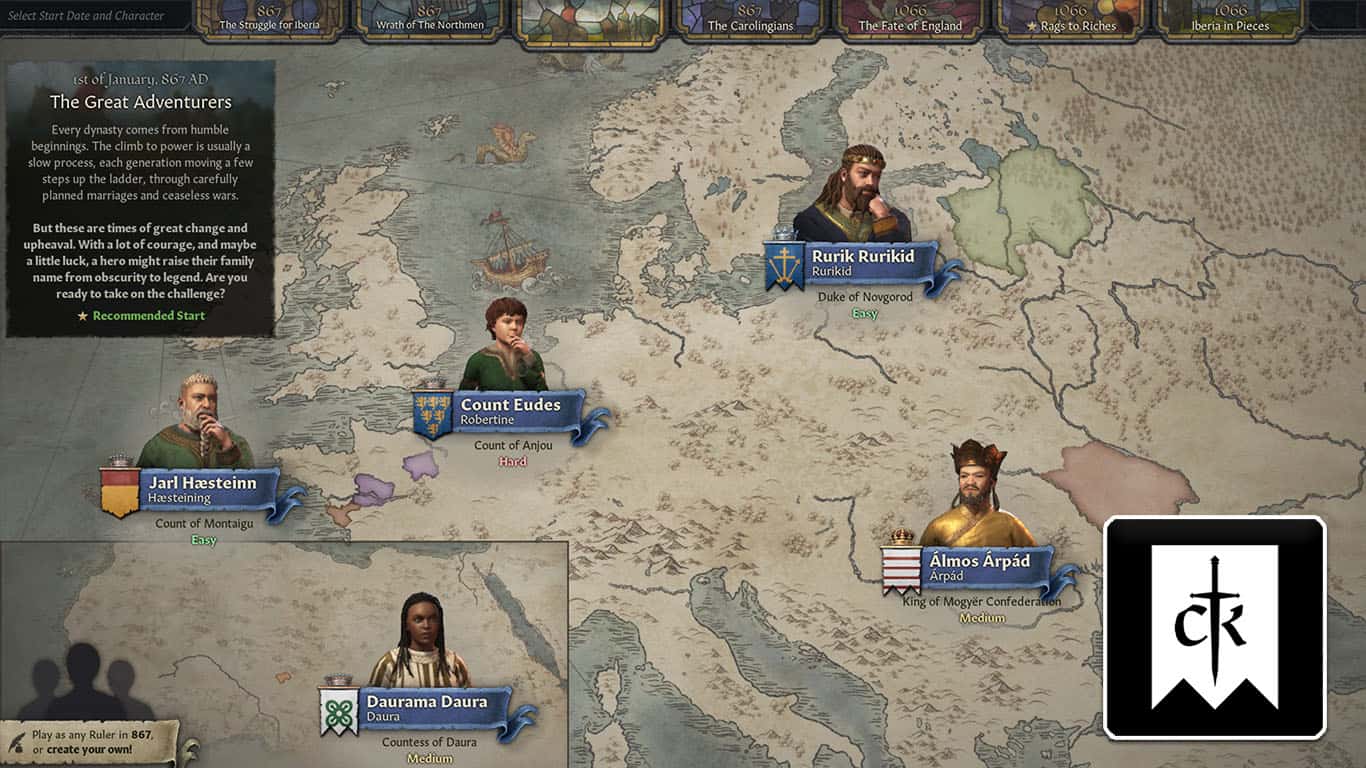 There are thousands of options when it comes to where you can start your playthrough in Crusader Kings 3.

However, some choices are objectively better than others. Either because the developers invested more resources in that part of the world or because the starting character can be extremely interesting.

Recommended Read: How to Change Culture in Crusader Kings 3

Since there are so many choices, it would be expected that you would need some help in deciding where to start the game.

So, to help you have the best experience possible, here are the best starting locations you can choose in Crusader Kings 3.

Since the game does a really good job of showing you the most interesting starts when selecting to start a new game, we will first tell you which ones of those are the best:

None of the starting locations and characters are good for this scenario. Though some of them can be interesting, you would be better off just choosing to play as another ruler from Iberia.

Wrath of the Northmen 867 AD

The Wrath of the Northmen scenario has the best starting locations in all of CK3. Any one of the Ragnarson brothers would be an incredibly fun playthrough.

The best choices, however, have to be either Ivar the Boneless or Halfdan Whiteshirt. Both of these two start at war with England and give you a quick chance to unite the British Isles.

Absolutely every starting location in the Great Adventurers start, besides the Count of Anjou, has an incredible starting character for a playthrough.

Jarl Haesteinn is a Norse Viking surrounded by Catholic feudal lords. This gives you a lot of opportunities, to either conquer Brittany or maybe go on an adventure even further.

Daurama Daura is your best chance at a matriarchal playthrough in the whole of CK3. Though it will be rough, you can create your own woman-ruled empire using her starting location.

With the Arpad dynasty, you can create one of the most powerful kingdoms in the Medieval Era, Hungary. Will you convert, or will you keep your pagan Faith? There are many choices that you will face as the ruler of the Magyar people, and you will have a lot of fun doing it.

With Rurik, you have a chance to form a Russian Viking empire, which is as entertaining as it sounds.

Unfortunately, starting as one of the Carolingians in CK3 is relatively boring, as you can quickly unite the broken empire and become the emperor of Frankia.

Though this would be a great start for a world conquest, it is relatively boring for a normal CK3 player.

Harald Hardrade of Norway and William the Bastard of Normandy are both some of the starting characters in CK3, as they can instantly conquer all of England and then have to stabilize the kingdom while keeping invaders out.

The Rags to Riches start is similar to the Adventurer start in 867 since most of these CK3 rulers have some amazing possibilities.

Duchess Matilda is a very powerful ruler from the start that can try to create a matriarchy in Central Europe.

Duke Robert is a retired Viking that just settled in Southern Italy, giving you the possibility to unite Italy through sheer force.

Though the Iberian start in 867 is relatively bad, this one is great if you want to do the Reconquista.

The game allows you to use special mechanics to unite the Iberian peninsula under Catholic rulers, so any one of the 4 kings is a good choice, given that they are brothers and you can just assassinate them to get their land.

That’s everything you need to know about the best starting location in Crusader Kings 3!

Crusader Kings 3 – How to Become Feudal