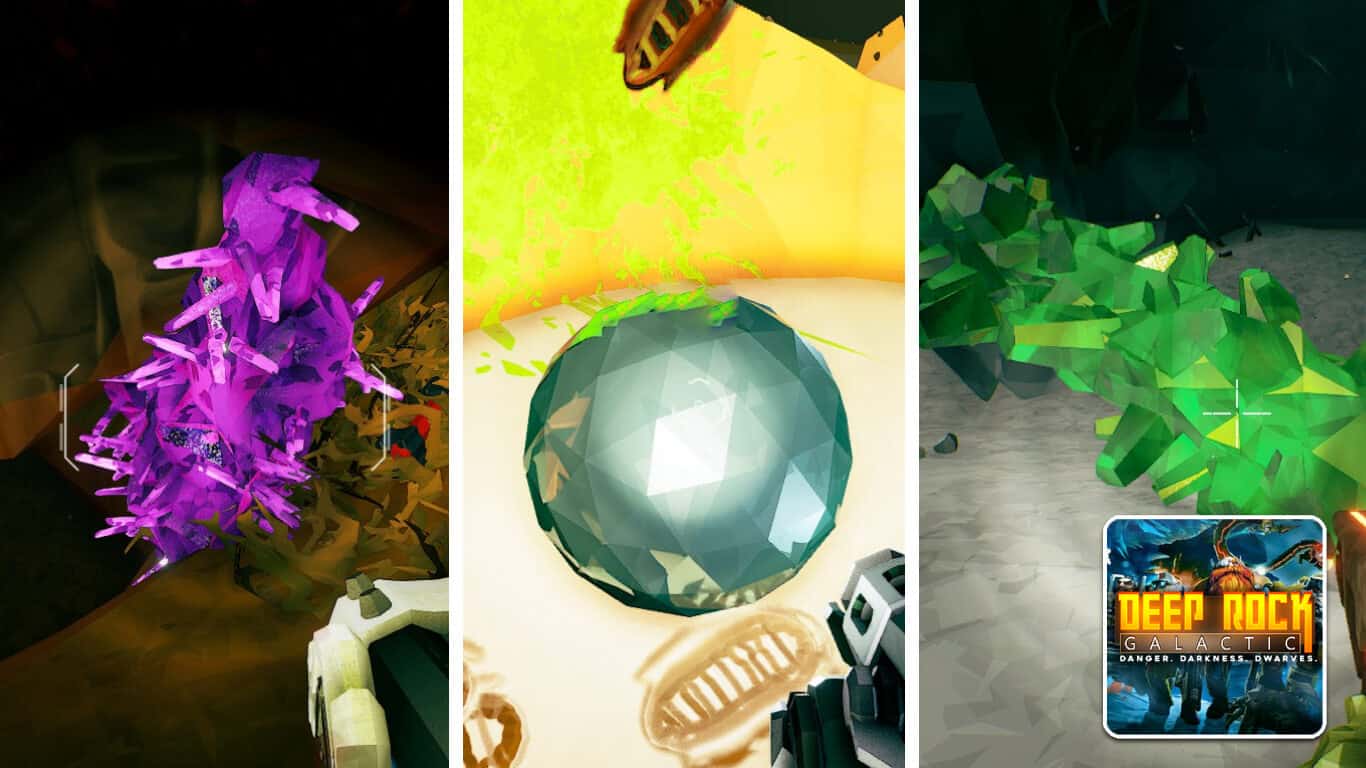 In Deep Rock Galactic, besides Gold and Nitra, it’s important to gather other materials along your mining journey.

Not only are they beautiful and shiny in the dark, but you can also use them for various purposes, such as unlocking weapons, buying upgrades, forging overclocks, and more!

In today’s article, let’s see how to farm materials in Deep Rock Galactic and how to find each of them!

Recommended Read: How to Get Pickaxe Parts in Deep Rock Galactic

The best way to farm materials in Deep Rock Galactic is to aim for long and high-complexity missions since they have a higher chance of spawning more resources and materials. Especially the Mining Expedition, Point Extraction, and Egg Hunt missions have a high chance (avoid Elimination missions in most cases). Finally, looking for those missions that have the Mineral Mania anomaly.

How to Farm Materials in Deep Rock Galactic

In Deep Rock Galactic, there are plenty of resources and crafting materials that you can simply harvest with your pickaxe. They can be deposited in the MULE and brought back to the Space Rig after each mission.

Besides mining the ore itself, you can find most materials by killing the Huuli Hoarders, opening Cargo Crates, or looting the Lost Packs.

Depending on what you do, you may need various different materials. So knowing how to farm them effectively is the fastest way to achieve your goal.

Let’s see where to find each of the materials!

Bismor is a yellow cube mineral with some orange spikes sticking out that spawn mostly on the ground. You can mine it with 2 pickaxe swings.

Croppa is a greenish mineral with purple spikes generated mostly on the wall of Hoxxes. To easily mine Croppa, you will need an Engineer’s platform in most cases. If you have a Scout on your team, let him do the next work!

Different than the two above, Enor Pearl is a little bit special. An Enor Pearl spawn inside of a wall and can be dug out with a pickaxe or Driller’s drill.

You should look for walls with lots of black glowing spheres. Then find the center and simply dig right into the wall to harvest a big pearl.

Similar to Enor Pearl, Jadiz spawn as a large green chunk inside a wall rather than spawning on the surface. It’s really simple to spot Jadiz since its green glowing light is so distinct in the Hoxxes’s world.

Magnite is a tall brown mineral with some black spheres on it. And to be honest, it’s quite hard to find Magnite since it blends in really well with the surrounding environment. For the best, you can ask Scout in your team for his flare.

Umanite is also a green crafting material in DRG like Jadiz, but instead of spawning inside a wall, Umanite spawns as a big leaning chunk on the Hoxxes’s surface.

Most of the time, you only need to mine the bottom part of Umanite, and the whole chunk will be broken. This is a great technique to save you quite some time mining.

Spawn location: In every biome and scarce in Salt Pits.

Phazyonite is a rare and thin purple mineral that spawns anywhere on the Hoxxes planet. Although you can find it in every single biome, the chance to find Phazyonite in a mission is roughly 14%, or 1 in every 7 missions.

Moreover, you receive less Phazyonite when mining, compared to other crafting materials. So next time you stumble across one of these purple minerals, mine them quickly!

ERR://23¤Y%/ (or Error Cube) is the rarest material in Deep Rock Galactic! With a 3.8% chance to spawn on each mission, you can expect to find around 5 cubes with 200 hours of playtime.

Like Jadiz or Enor Pearl, Error Cube spawns inside the wall and emits a strong purple light to the surrounding areas. Around the wall, you can see some mineral fragments created by the cube.

Now we come to a traditional resource in DRG, compressed gold. It’s a giant gold chunk that when pointed with a laser pointer, your dwarves will say “We’re rich!” voice line.

To find Compressed Gold, look for any walls with some small golden fragments on them. Then dig straight into the center for a gold chunk.

Each mission has a 4.76% chance (or 1/21) to spawn at least 1 Bittergem. But because of its rarity, you normally can get only 1 Bittergem for each mission.

Similar to Compressed Gold, you need to dig into the wall with some small purple fragments to retrieve the Bittergem.

That’s all about how to farm materials in Deep Rock Galactic!

We hope you can choose the best mission and start gathering as many resources as you can. Rock and stone, to the bone!