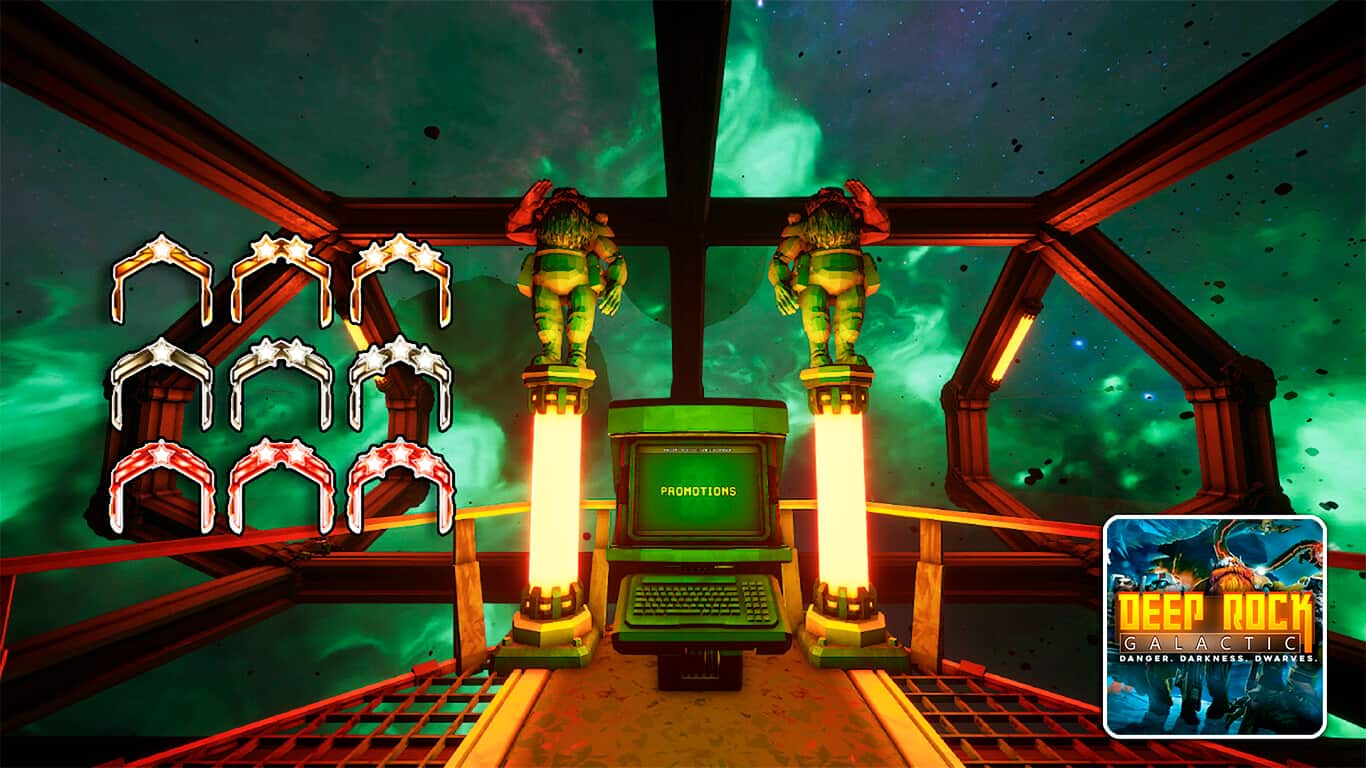 Promotion is a thing everybody desires both in real life and in video games. And it’s also true in Deep Rock Galactic!

To progress further into the game and unlock late-game features, you have to promote your beautiful dwarves. With that being said, this article will guide you on how to promote character in Deep Rock Galactic.

Recommended Read: How to Unlock Weapons in Deep Rock Galactic

To promote character in Deep Rock Galactic, you need to reach level 25 in a specific character. Then go to the end of the Memorial Hall (second floor) and pay a “small” fee to promote. Easy as that!

How to Promote Characters in Deep Rock Galactic

When it comes to promoting in Deep Rock Galactic, you do the promotion for a specific dwarf, not your overall player. That’s why you need to choose a class and play it to level 25 in order to promote.

At first glance, 25 levels seem like much. But you can follow this guide for how to level up fast in Deep Rock Galactic!

When you do things right, you can level up multiple times just by doing 1 mission.

To promote, you have to be in a private lobby. If you’re playing solo, all good. But if you’re in a team after completing a mission, you have to say goodbye to your fellow dwarves and leave your team.

This can be done by pressing the ESC key and clicking the Leave Team option in the top right corner of your screen.

Leave your cabin and head to the entrance between the Pickaxe Customization Terminal and the Equipment Terminal.

You will see an elevator. Wait for it to come down and go in.

Turn around, and you will be on the second floor!

Now let’s go through the tiny tunnel to enter the Memorial Hall.

It’s a big room with black ground, two floors, and some giant statues in the middle. Your goal is at the end of this room, the Promotion Terminal.

When you see a small terminal with 2 scout statues, press E to open the promotion terminal.

See the number of credits and minerals on the screen? That’s the price you have to pay to promote! Now you know why mining gold and special minerals are important, right?

When you’re done and have enough materials, just click “Yes… and hurry up I got mining to do!”, and the promotion success screen will be played. You will then be brought back to your cabin to start a new journey.

What is the Promotion Cost in Deep Rock Galactic?

Depending on the class you promote and how high your rank is, the cost is massively increased. Not only are credits used but also special minerals.

Deep Rock Galactic has a total of 18 ranks divided into 6 main ranks (Bronze, Silver, Gold, Platinum, Diamond, and Legendary). Each rank has 3 divisions, with a number I, II, and III following the rank name.

For example: After your first promotion, you’re at Bronze I rank. Then you will make your way to Bronze II, Bronze III, Silver I, and so on!

How many times can you do promotion in Deep Rock Galactic?

You can promote each character 18 times! That’s a total of 72 times to promote all 4 dwarves.

What are the Promotion Benefits?

You’re not sacrificing your credits and minerals for nothing! Promotion in Deep Rock Galactic unlocks a lot of cool features like the honor badge, additional active perk slot, access to the forge, deep dives, overclocks, and new assignments.

What is an honor badge when you promote in Deep Rock Galactic?

After promoting, you can see your character portrait has a different border now. It’s your honor badge! The color and the number of stars on your badge display what rank and division you’re currently in.

That’s how to promote in Deep Rock Galactic!

Rock and stone, and you’ll never be alone!

Deep Rock Galactic – How to Get Pickaxe Parts

Deep Rock Galactic – How to Get Outside The Space Rig