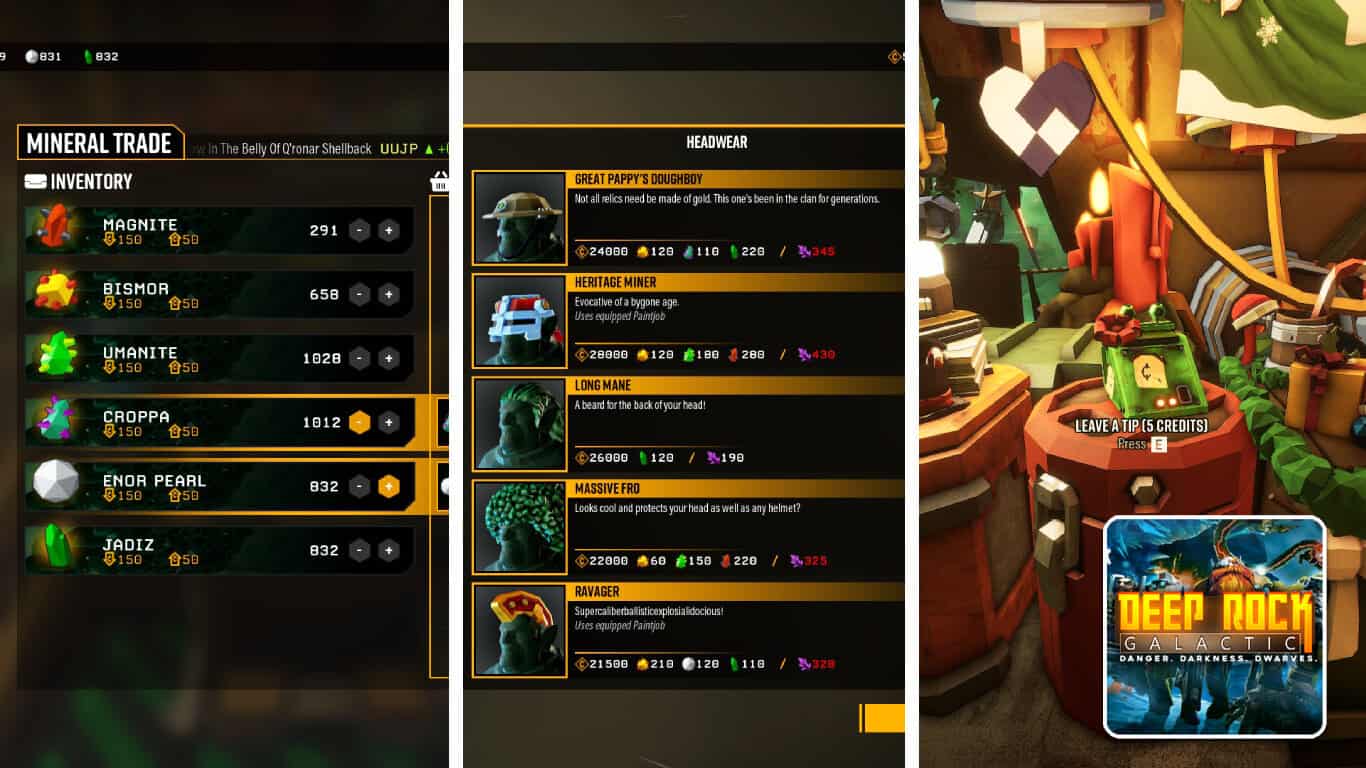 Credits are one of the most important resources in Deep Rock Galactic.

You have to mine gold, which can only be found by doing risky mining missions. And each gold ore turns into 2 Credits.

In this article, we’ll show you where to spend Credits in Deep Rock Galactic.

Recommended Read: Where to Find Morkite in DRG

In Deep Rock Galactic, you can use credits to purchase cosmetic items, unlock and purchase weapon upgrades, buy beers, do promotions, trade, play the jukebox, and more. Some activities cost more Credits than others, so we recommend saving at least 20,000 Credits in your account.

Where to Spend Credits in Deep Rock Galactic

There are plenty of ways you can use Credits in DRG. Let’s take a better look at them!

One of the most common ways to spend your Credits is to purchase cosmetic items in the Accessory shop.

The price varies from a few hundred up to fifty thousand Credits, along with other rare minerals.

The tip here is to buy only what you need. Since most of these are so expensive and they only change your dwarf’s appearance, not affect any stats at all.

New weapons are necessary because they change the way you play the game. Depending on your play style, you may find some weapons are extremely better than others.

The cost to unlock a new weapon in DRG isn’t that high, but to unlock all of them is another story.

That’s why you should read carefully before unlocking a new weapon. Because besides the unlock cost, you have to spend some more Credits and rare minerals to buy its upgrades.

Promotion is a must-do activity in Deep Rock Galactic.

Not only does it allow you to furthermore level up your dwarves, but the first promotion also unlocks several features that can drastically help you in mining missions.

From the second active perk, weapon overclocks, machine events, and more. So you don’t want to miss those.

You can trade Credits for rare minerals and vice versa in the Mineral Trade terminal.

This feature is quite useless in the early of the game but becomes more powerful in the late game.

Remember to watch for any discounts so you can make more benefits with this feature. In the late game, you always lack Credits so selling rare minerals is a wise choice.

Here comes the most important usage of Credits – to forge overclocks.

Overclocks are powerful upgrades for your weapons. They completely change your playstyle and tactic in Hoxxes.

An overclock usually costs around 7,000 to 23,000 Credits, which is quite expensive since you can have up to 100+ overclocks in the game.

You can use some spare Credits to purchase beers in the Abyss Bar for your beautiful dwarves.

The cost to brew one is under 100 Credits, so it’s always good to buy beers.

However, before you can brew beer, you have to unlock the beer licenses first, which can cost up to thousands of Credits and hundreds of brewing materials.

Do you enjoy the service of Floyd, the Robotic Bartender?

If so, remember to always give him a good tip with only 5 Credits. This action can be done by pressing “E” while looking at the small cash machine to the left.

The jukebox is another great feature of DRG.

What can be better than dancing with your fellow dwarves after a long mining trip?

By paying only 2 Credits each time, you can have a dance club happens right in front of the Abyss Bar.

Now let’s reward yourself with the fresh beer and a cool move, brothers!

Those are the 8 places you can spend credits in Deep Rock Galactic.

Let’s mine every single shiny gold ore on Hoxxes, miners!

Deep Rock Galactic – What Is the Best Class to Play?