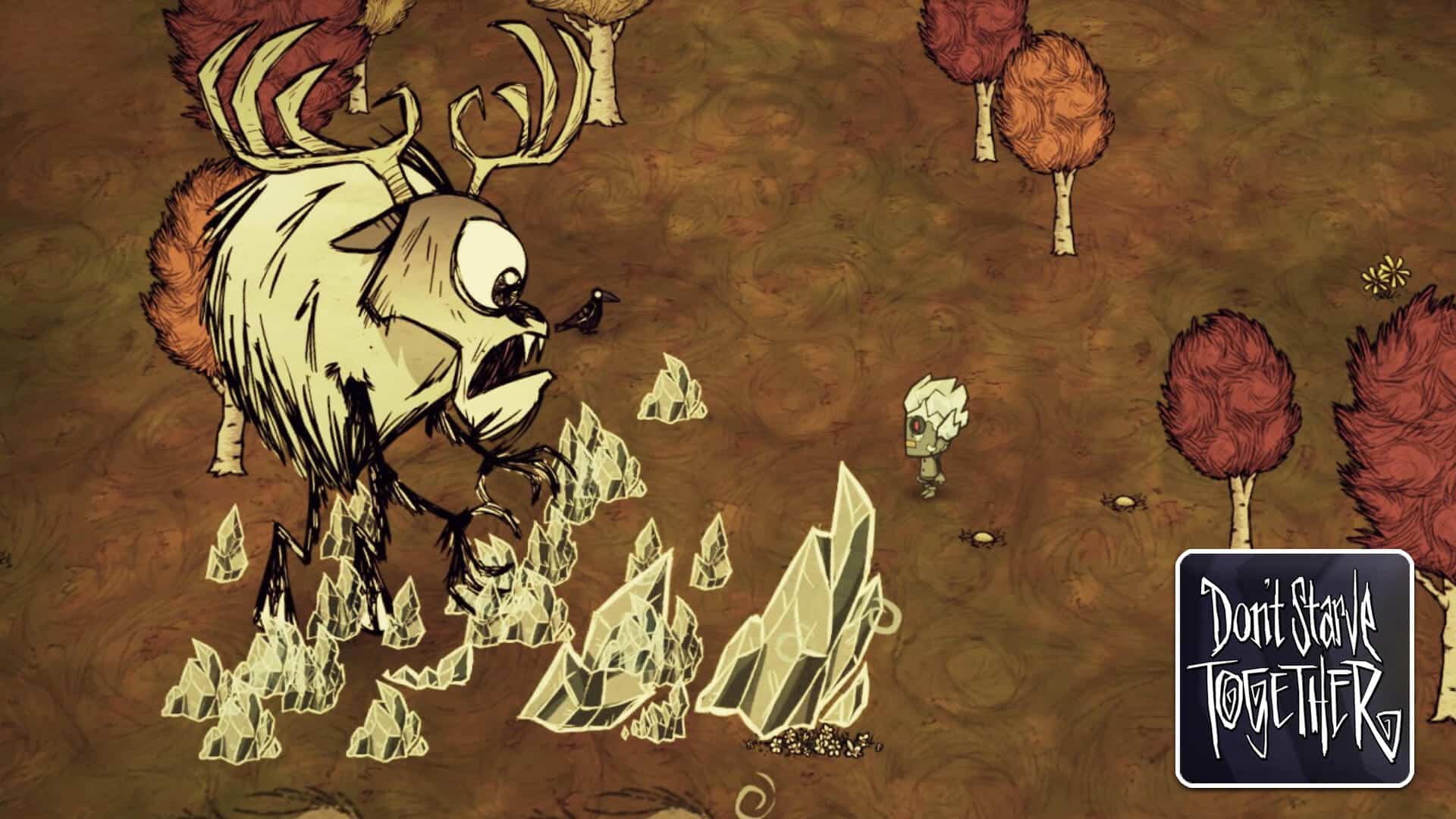 Deerclops is the first-ever boss in Don’t Starve Together you have to deal with.

Your entire base can be destroyed in a matter of seconds by Deerclops. That’s why in this article, we’ll show you how to beat Deerclops in Don’t Starve Together!

Recommended Read: How to Survive Winter in DST

Depending on your experience, you may not need any healing food at all, but some food like Pierogi, Fishsticks, or Wobster Bisque could help. With kiting technique, you only need a log armor and a spear to defeat the Deerclops easily.

How to Beat Deerclops in Don’t Starve Together

To beat Deerclops in Don’t Starve Together, you have to prepare weapons, armor, and healing food. Other than that, bringing some common materials like cut grass, twigs, logs, and a thermal stone is recommended.

Because Deerclops spawn at night, you have to set up a consistent light source around the fighting area so you won’t die from the dark.

And because Deerclops tend to spawn near the player’s base, you and your friends have to prepare everything soon and temporarily leave your base for the fight.

What we usually do is bring all materials with us, go far away from the base, and set up a Fire Pit. You’re good to go!

Most players in DST will use a normal spear (or Battle Spear if you play Wigfrid) to fight the Deerclops. Nothing wrong with it, but it will slow your combat down a lot!

Instead, pro players tend to use Ham Bat or Tentacle Spike to fight Deerclops.

You can craft a Ham Bat using 2 meat, 2 twigs, and 1 pig skin. Aim for any pig houses you come across and destroy them with a hammer for the materials.

Tentacle spikes have less damage than the Ham Bat (51 compared to 59.5), but it’s still the best weapon at this point. Tentacles in marshes and caves biomes have a 50% chance of dropping one, but it’s quite hard to defeat those.

In the early stage, there aren’t many fancy armors for you just yet. The ultimate combo to defeat the Deerclops is the Log Suit and the Football Helmet.

The log suit can absorb up to 80% of the incoming damage and has 315 durabilities in Don’t Starve Together. You can craft one with 8 logs and 2 ropes.

Combined with the football helmet, which can be crafted with 1 rope and 1 pig skin, you can confidently solo with the Deerclops easily! Just don’t stand still and tank it, since the Deerclops is still a boss in the game and can do significant damage to your armor.

If you want to tank the Deerclops, make some extra log suits and helmets and put them in your inventory. When one is destroyed, the new one will be automatically equipped.

Butterfly wings or butter are a really good source for healing in the early days of Don’t Starve Together. Each butterfly wing restores 8 health points, and butter can heal 40 health instantly.

Besides that, honey, fish, eggs, and meat are primary food that you may want to gather a lot since you can cook some of the best healing food with them, including:

If you’re playing WX-78, gears can be a super good source of healing. Each gear restores 60 health when eaten.

When the Deerclops is spawning, you will hear a lot of growling sounds, and your characters will say some special lines. Run far away from your base if you’re not, and be prepared!

When the ground is shaking, Deerclops is coming!

If you have enough healing food and armor, you can stand still and hit it until one of you die.

But if you want to be a pro player, you should learn how to kite (hit and run) in Don’t Starve Together. With an attack period of 4, Deerclops attack once per 4 seconds.

Its attack can reach up to 8 meters in the direction it’s facing with a cone shape. When you’re hit twice or more, you will be frozen, so be careful!

You can hit the Deerclops up to 4 times and start running away immediately to avoid its next attack. Then go back in and repeat the process until the Deerclops is dead.

If you have a Walking Cane or fighting the Deerclops on a road, it will be much easier to hit it 4 times. Otherwise, if you don’t feel confident, only hitting it 3 times before running away is also a good option!

How Much Health Does Deerclops Have?

In Don’t Starve Together, Deerclops has 4,000 health points.

If you still stick with a normal spear when fighting a Deerclops, you have to hit it 118 times. With a ham bat, you only need to hit the Deerclops 68 times while it’s still fresh.

If you manage to get a better weapon like the tentacle spikes, use it in battle instead of normal tools like the axe, pickaxe, or shovel.

Some characters will have unique perks and conditions to do more damage. For example, Wolfgang in his finest form can do double damage. With a ham bat, you only need to hit the Deerclops 34 times. Pretty fast, right?

What Day Does Deerclops Spawn?

In Don’t Starve Together, Deerclops usually spawn on the night of day 30. It can spawn late if no players are on the ground or on the main island. Until then, you only have 60 seconds to prepare before hearing some roaring sounds.

With that being said, it’s best to prepare everything you need to defeat Deerclops from the beginning of the Winter, or even Autumn if you’re so afraid of the Deerclops.

What to Do When Deerclops Is Not Spawning?

There are many possibilities a Deerclops won’t spawn in your world. Here’s what to do if you’re facing one:

If you’re done checking all the conditions above and still can’t find the Deerclops, we’d recommend using the rollback feature to roll your world back a few days, then wait again and hope the Deerclops will spawn.

Alternatively, you can use commands to spawn a Deerclops. This sounds like cheating but if there are no other ways, you can do this without so much guilt.

To start using Don’t Starve Together commands, press “~” on your keyboard to open the debug menu. Then type /c_spawn(“deerclops”) to spawn a Deerclops at your cursor.

That’s how to beat the Deerclops in Don’t Starve Together!

Pay close attention to the day, prepare the materials, and go kick your first boss!

Don’t Starve Together – How to Survive Winter

Don’t Starve Together – What Is the Best Food for Sanity

Don’t Starve Together – How to Unlock Characters