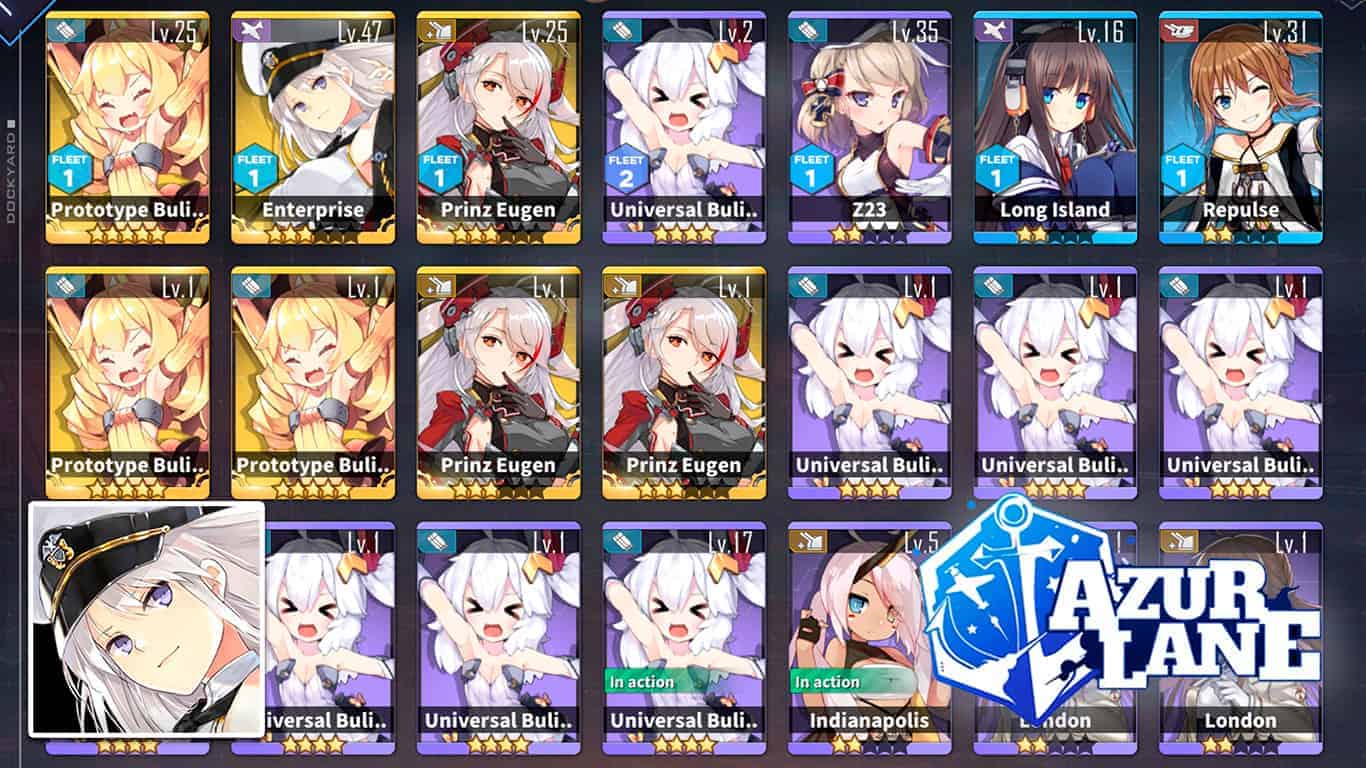 Getting new ships and assembling the ultimate fleet in Azur Lane is a significant part of the game, and a thrilling experience when pulling new ships.

Unlike many other similar RPG gacha titles, you can get a lot of ships in Azur Lane by just playing the game, so there’s always a new fleet formation to try out.

There are more than 250 unique ships in the game, so you’ll need to take advantage of all the ways to get new ships if you want to collect them all.

In this guide, we’ll go over every single way to get new ships in Azur Lane.

Here is a quick rundown of the different ways to get ships in Azur Lane.

Building ships is going to be your main source of new ships in the game.

You can build ships by spending cubes and coins.

By completing stages in the campaign, you can get your hands on some decent ships quite quickly.

The farther into the campaign you get, the better the ships from stage rewards.

Completing missions can give you ships as well; some have a chance to do so, others are guaranteed to give ships.

Most events that run in Azur Lane include ships as a reward in some way, so always check out the current events.

Under the exchange tab in Build, you can exchange medals for specific ships.

More details on all of these methods on how to get ships below.

The primary way to get new ships in Azur Lane is by using the build feature.

Building a ship is the equivalent to summoning in other gacha games, as the ship you build is a random pull.

In Azur Lane, however, you have to wait for the ship to be built before you actually pull it, which usually takes around 2-4 hours.

To instantly finish the building of a ship, you can use a quick finisher.

Building the ship itself costs wisdom cubes and coins.

All the materials required to build ships, including the quick finisher, can be obtained through beating stages, completing quests, etc.

To build a ship in Azur Lane, go to the home screen and press the Build button in the bottom menu.

Here you can select between the different types of builds and see the cost of each one.

When you build a ship, your order is automatically sent to the Orders tab right below the Build tab.

In the Orders tab, you can see how many ships are being built, as well as how long is left until they’re finished.

To instantly build a ship, click the Finish button on the order you wish to speed up.

Here is an overview of the summon rates of all the build types in Azur Lane.

Completing stages in the campaign is another great way to get more ships, and the only cost is the oil you need to spend on starting the battles.

Most battles in the game, have a chance to dropships as a reward.

In the beginning, you’ll mostly get common ships, but as you progress further into the campaign, battles will start dropping ships of higher rarity.

Because you can get ships from beating battles in Azur Lane, you can easily farm a lot of ships as long as you have the oil.

Farming common ships is a great way to upgrade the stats of another ship through enhancing, so farm those battles.

You can see if a specific battle has a chance to give a ship as a reward before you start the battle.

Here you can also see the rarity of the potential ship.

The ship you get from a particular battle is random but based on a pool of ships.

A common reward in the main, side, and sometimes weekly missions are ships.

Most missions are fairly straightforward to complete and compliment your current gameplay and progress in the campaign.

Therefore, you should always look out for missions you can do, as their rewards are extremely valuable.

Most of the missions that give ships ask you to obtain 3 stars in specific stages, which requires you to play them multiple times.

So if you don’t look at your missions and go back to complete them, you’ll miss out on ships.

The further into the game you get, the higher the rarity ship missions give.

You get an elite ship for just clearing stage 3-4, for example.

Besides giving regular ships, missions also give Bulins, which you need at some point for limit breaking.

You won’t necessarily need these on your fleet, but collecting them for later is always nice.

You can find all your current missions by pressing the Missions button in the bottom menu on the home screen.

We, of course, recommend you complete all your missions, but if you’re just looking for ships, main, side, and weekly missions are where you’ll find them.

The team behind Azur Land is great at putting out new events, so players always have something fresh to do.

In these events, you can almost always get ships as a reward for your efforts.

Usually, events come with a special time-limited event currency which you can get by completing event quests.

Along with the event currency, they also release an event shop where you can exchange your event currency for valuable resources and ships.

As events constantly change, we can’t give you specific instructions on how to get ships from a particular event that is running at the time of your reading, but they usually include a reward system as described above.

Sometimes, like in the Christmas event, you can also get a special event box after completing enough event tasks, which contains useful items, including ships.

Login events are another great way to get some more ships with very little effort.

At the start of your journey, there’ll be multiple login events, all of which give ships of high rarity at some point.

After the initial week or so of being a new player, the only login event is the monthly login event, which also does give some ships, including elite and super rare Bulins.

By leveling up your character, you can get Bulins and wisdom cubes, which you can use to build ships by claiming level-up rewards in the events tab.

Besides Bulins and cubes, you also get tech packs, quick finishers, oil, and gold from these rewards.

If there is an event shop at the moment, you can find it under the Event tab in the Munition shop.

Login events and level-up events can both be found by pressing the Exchange button on the main screen.

Here you’ll also find any other rewards program running at the time.

Every single day, you’ll be presented with a new selection of 6 unique ships, which you can buy in exchange for medals.

Most ships you can purchase with medals are rare and common, but there is also the occasional elite ship in your daily selection, as well as Bulins.

However, besides the 6 daily ships, there is always a super rare ship for sale, in exchange for a lot more medals, of course.

If you have the 80 medals required to purchase the SR ship, we recommend you do so.

You can get medals of honor through different methods, but the primary way to get them is by retiring ships.

The number of medals you get from retiring a ship depends on the rarity, level, and tier of the ship.

To exchange medals for a ship, press the Build button on the home screen and go to the Exchange tab.

Here you can click on the specific ship you wish to purchase or press the Exchange button in the bottom right corner to buy the SR ship.

The last way to get new ships in Azur Lane is through the Munitions merit shop.

You can access this shop by going to the Academy through the HQ button and then selecting the Munition.

In the Munition are different shops, including the Merit shop where you can exchange merit for goods.

Most of the goods you can buy in this shop are tech packs, but it does also sell some ships, some of which are SR.

SR ships and SR bulins are expensive, but especially the SR ships are very much worth the merit.

You get merit from participating in PvP battles, known as exercises.

There are also missions related to exercises that give merit as well.

The merit shop refreshes daily, but you can refresh it yourself if you want to.

That’s all the ways to get ships in Azur Lane!

You are now ready to fill up your fleet with great ships or build a new one.

If you have any suggestions or input for this guide, you are welcome to leave them in the comment section below.