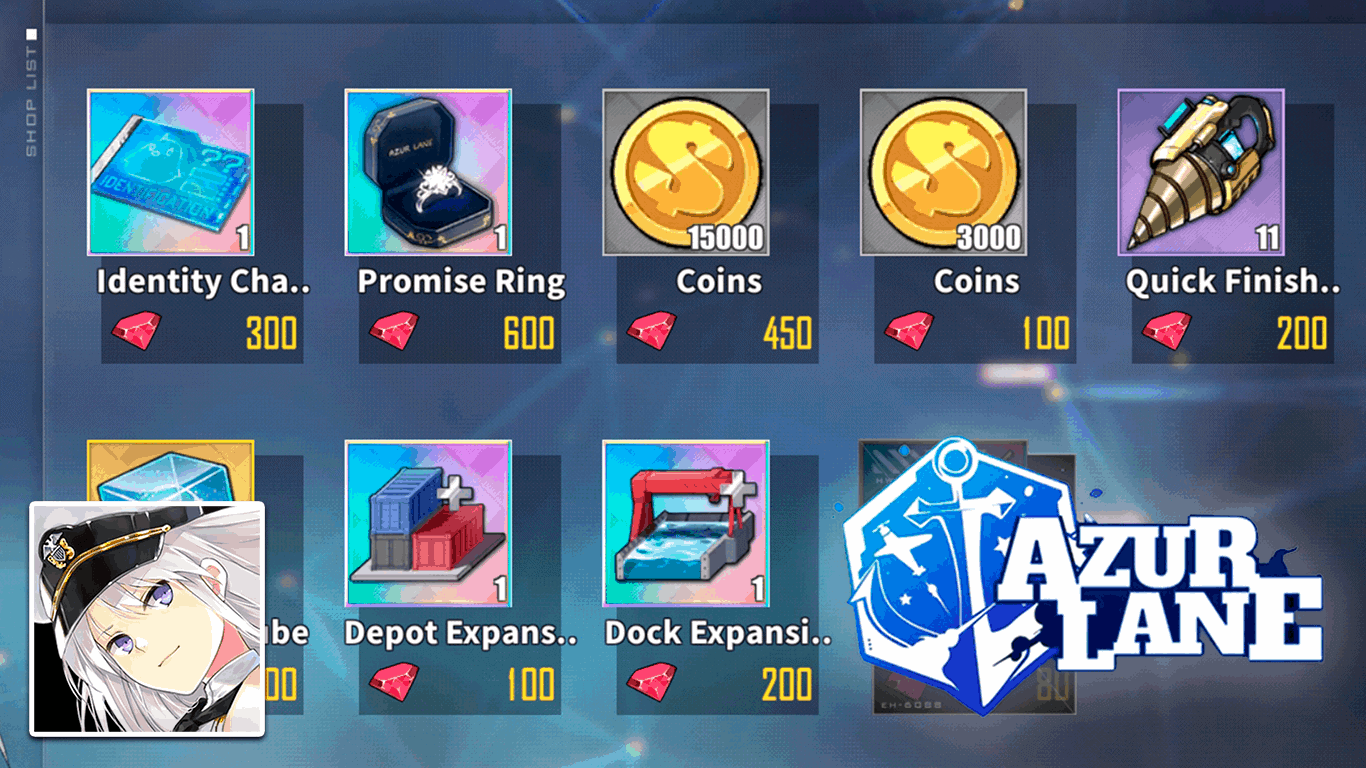 The premium currency in Azur Lane is gems.

You can obtain gems by playing the game, completing missions, etc., but they can also be purchased through the store as it is the premium currency of the game.

Because of the scarcity and value of gems, you shouldn’t just spend gems on whatever.

In this guide, we’ll help you decide what to spend your gems on to get the most value out of them.

The short answer is that you should spend gems on upgrades that can only be acquired by spending gems.

These upgrades include dorm room slots, a third academy slot, deck expansion, ring packs, and skins if you want to change the look of ships.

Skins purchased with gems don’t change the power or stats of a ship.

There might also be situations where spending gems on other items could be worth it – more on this below.

What to spend gems on in Azur Lane

There are a couple of things you can purchase in Azur Lane exclusively with gems, all of which are extremely valuable because they ultimately improve the strength of your fleet.

Early on, you can quickly get through without these upgrades, but later in the game, you’ll benefit massively from having these.

Here are all the things you should consider spending your gems on, as well as why their worth their price.

The first thing you should consider buying with your gems is more slots in the Dorm.

You can access your Dorm by pressing the HQ button in the bottom menu of the lobby screen and then selecting Dorm.

In your Dorm, you can assign ships to hang out, which makes them earn exp passively.

All you have to do for them to earn exp is to make sure there are supplies for them.

To add new supplies, press the Supplies button in the bottom left corner and select a snack to give them.

You can see how long your current supplies will last on the timer in the supplies menu.

Throughout the entire time supplies last, all ships assigned to your Dorm will earn exp.

Leveraging the Dorm is an excellent way to train your ships and will make sure you always wake up to a lot of fresh exp for your ships.

In the beginning, your Dorm only has two slots, which means you can only assign two ships at a time.

However, you can unlock more slots under the Train button by spending gems.

You can unlock up to a total of 5 slots in your Dorm, meaning you can assign a total of 5 ships at a time, once you’ve unlocked all slots.

The second thing you should consider spending your gems on is more dock space.

By default, you have dock capacity of 150, which means you can hold 150 ships.

This is plenty of space early on in the game, but as you progress and rake up duplicates for upgrades, etc., you’ll quickly be in need of more dock capacity.

Furthermore, you earn many more ships in Azur Lane from just playing the game than you do in other similar games, so you’ll have 150 ships in no time.

To purchase more dock capacity, go to the shop by pressing the Shop button in the bottom left corner of the lobby and select the Items category.

Here you can purchase dock expansions for 200 gems each, that increase your dock capacity by 10.

In Azur Lane, you can marry ships by offering them a ring once they reach 100 affection.

When you offer a ship with 100 affection a ring, their affection cap increases to 200 instead of the usual 100.

When a ship gains more affection, their stats increase, which is why offering a ring to a ship is so valuable.

Those 100 additional affection points give a lot of extra stats to your ship.

You should, therefore, consider spending your gems on Promise Rings, which you can buy in the shop under the Items category.

There are several ways to increase the affection of a ship to 100 points, including using it in battle.

Another great use of your hard-earned gems is a third slot in the Academy.

In the Academy or, more specifically, the Tactical Class in the Academy, you can level up the skills of your ships.

By default, you can only upgrade two skills at a time, but by spending 500 gems, you can unlock the third slot.

When you’ve unlocked this third slot, you can assign a total of three different ships to the Tactical Class at a time, all of which can have one of their skills upgraded.

To unlock the third slot, go to the Tactical Class in the Academy, scroll down, and tap the Click To Unlock button.

Even though skins you can buy in the shop by spending gems doesn’t give any stat boosts, many players enjoy the cosmetical change.

Therefore, we’ve included them in this post, as skins are a big part of the game for many players.

If there is a particular skin you really want to have, you have to spend gems to acquire it.

From time to time, there are special events that allow you to purchase specific skins with other in-game currencies.

In certain situations, there could also be an argument for buying Wisdom Cubes and Quick Finishers for gems if an extremely good limited time summon event is running.

However, generally, we recommend just saving up cubes and finishers from gameplay for when events go live rather than getting them by spending gems.

These are, of course, just our recommendations for how you should spend your gems.

We prioritize getting value from gems rather than convenience or looks, but in the end, it’s up to you.

All the items you can buy with gems

You can purchase all sorts of things with gems in Azur Lane.

To give you an overview of all the items you can buy with gems in the game, we’ve put together the following list.

In this list, you’ll find the price of each item, as well as a short description of the item.

Should you spend your gems now or save them

Even though most people don’t like to hold back spending resources they’ve just acquired, it might be a good idea to hold onto those gems for now.

As explained earlier on, there is no single item that is the very best to spend your gems on, as it depends on the situation you are in.

There are, however, some upgrades and items that are much more valuable than others. Thus, you should probably spend your gems on those.

We’ve listed all of these valuable upgrades and items in the first par of this guide.

All these upgrades and items we’ve listed are not necessary and won’t do much for you at the beginning of the game, which is why you shouldn’t blindly buy one of them right off the bat.

Instead, wait till you’ve progressed a bit through the game and see which upgrade would help you out the most and buy that one.

If you really want to spend gems now, even though you haven’t made it that far into the game, we recommend buying Dorm slots.

Hopefully, you’ve become more informed on the subject of what to spend your gems on in Azur Lane, as well as when you should spend them by reading this guide.

If you have additions or suggestions you believe should be added to this guide, then you can share them with us in the comment section below.