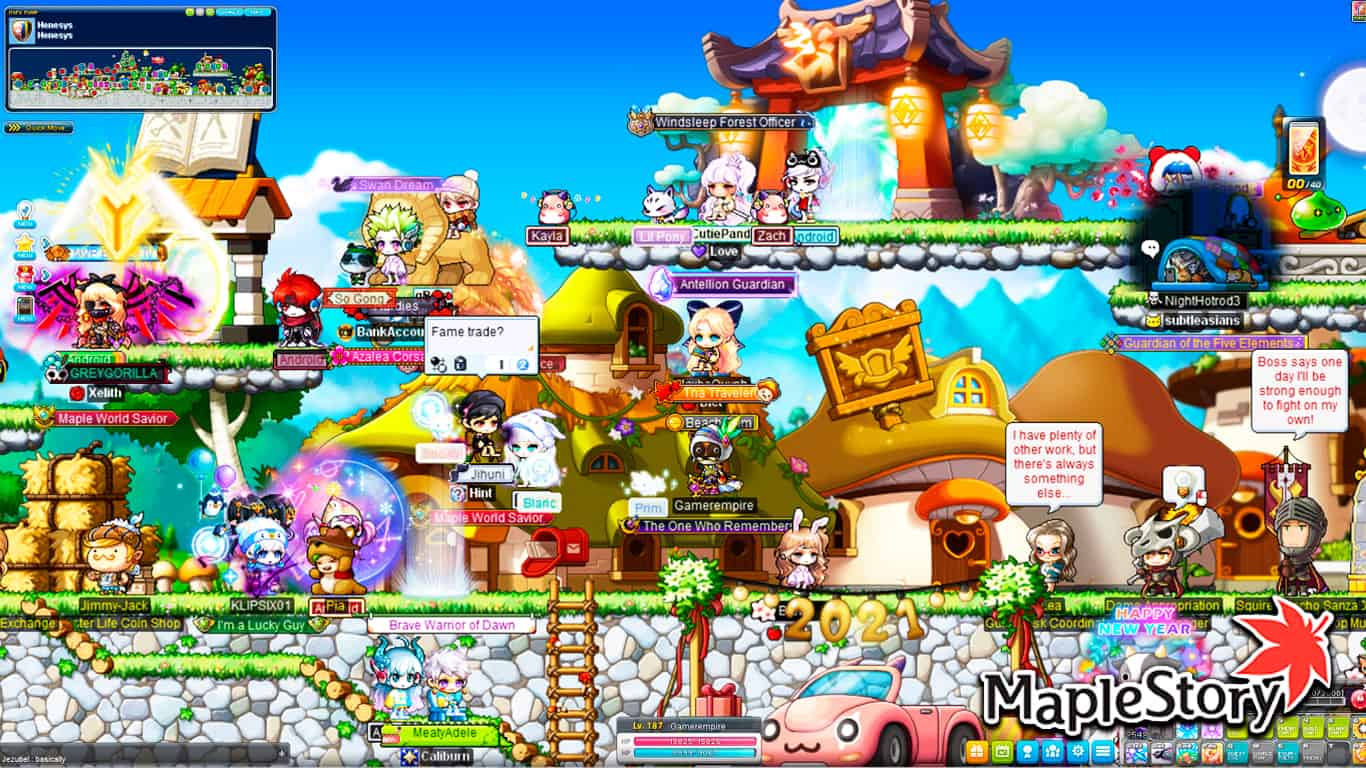 Maplestory is one of the oldest MMORPGs that still has an active player base.

Being a game many people played when they were younger, it’s natural to want to give an old classic a try once more.

But, how is Maplestory today as it obviously differs quite a bit from the feel old-school players remember.

Whether Maplestory is worth playing in 2021 or not depends entirely on your preferences. We recommend you give it a try if you’re curious, as the game now allows you to quickly experience a wide range of its content.

In this post, we help you decide whether Maplestory is worth playing for you by explaining the major points of the game we believe you need to know as well as the overall differences between then and now.

Is Maplestory worth playing in 2021?

Maplestory is still a popular MMORPG with an active player base, even though it obviously is a lot smaller than it used to be.

The game has kept its core gameplay style and objectives. However, the overall feel is quite different from what it was back around ten years ago.

Now, the game is much more focused on progressing through the game fast to reach end-game content and taking on tough bosses than it is slowly exploring the world and becoming slowly more powerful.

Even as a new player with no stat boosts from your account or leveling gear, etc., you can still reach level 200, which is now not the maximum level anymore, within a couple of days.

It will, however, take a couple of months to level from 200 to the now maximum level of 275.

Therefore, it’s natural for players to start heavily improving the stats, skills, and equips of their character from level 200 and up so they can start taking on the toughest bosses in the game.

One thing you’ll quickly notice if you return to Maplestory after not playing for around ten years is that everything is bigger now. Bigger numbers, bigger animations, larger meso amounts, and so on.

Especially some of the newer classes will feel like a 3rd or 4th job class already at level 10 in terms of mobility, gameplay, and animations if you compare to pre-Big Bang days.

The Reboot server is a special server where enemies are stronger, EXP rates are higher, and you cannot trade between players, but the pay-to-win aspect is essentially removed.

On the Reboot server, players can purchase miracle cubes and other cash items that usually cost NX by spending mesos only, creating a very different dynamic compared to regular Maplestory. Only pets, cosmetics, and a few other cash shop items actually cost NX.

Players can still trade between each on regular servers through trading or the auction house, where anyone can buy and sell items for free.

There are, however, now ways for players to earn items that usually cost NX without spending money, including reward points and the ability to buy and sell NX in exchange for mesos directly in the game.

Back in Maplestory’s prime, team play, such as party quests was a major part of the gameplay experience and leveling, whereas that has been replaced by simply training solo at regular maps.

Instead, teamplay becomes relevant when you reach end-game and start doing boss runs with other players like your guild members.

Many more things have changed in the game, but these are some of the major overall changes.

Find more details about these and other changes below.

For many players, the community aspect of Maplestory was what made it special.

These days, you won’t find the same large gathering of players or party quest leveling groups.

There are still players just hanging out in some of the major cities in the game, but nowhere near as many players as there used to.

This doesn’t mean that Maplestory is a solo game now. Teamplay just usually first becomes relevant when you start taking on tougher bosses after level 200.

In this case, it’s very common to join a guild that you do boss runs with. Thus also giving you a community to chat or do other activities in the game with.

So, whereas cooperating between players was very common all throughout the game ten years ago, the vast majority of players now solo through the game until they are ready to take on tough bosses.

Party quests do still exist in the game but are not very popular and have all been put into the same special party quest lobby map.

For more information about the player base in Maplestory, check out our post on the topic; Is Maplestory A Dead Game?.

How pay to win is Maplestory

One of the factors that caused Maplestory to lose popularity around ten years ago was the introduction of the potential system.

To get the potential you want, you have to reroll the potential lines over and over again by using miracle cubes, which can be purchased by spending NX.

Therefore, players who are willing to spend a lot of money can progress much faster than those who don’t, which a lot of players don’t like.

So the answer is, yes, on regular servers, you can pay to win, and just as much as you want.

However, as Maplestory isn’t a PvP game, you can take things at your own pace.

And with the introduction of several new systems, including reward points, the ability to buy and sell NX for mesos in-game, crafting, and more, players can get cubes and all other items needed to upgrade their gear without spending any money.

You will, however, not progress as fast as those who spend money on the game if you are a free-to-play player, but if you are fine with taking it at your own pace, you can reach the end-game without spending any money.

On the Reboot server, a special server was created because many players wanted a non-pay-to-win server, things are very different compared to regular servers.

Here, the only things that cost NX are cosmetic items and pets.

This means that cubes and other gear-upgrading items can be purchased directly with mesos.

Because of this, players often call the Reboot server a pay-to-play experience, as buying a pet for a couple of dollars every 90 days will significantly increase your gameplay enjoyment.

It is, however, still possible to obtain pets in the game without spending NX, but it can first be done later in the game and will take time.

While the Reboot server features a lot of what free-to-play players wish for, there are some things you cannot do on the server, including trading with other players and scrolling.

The conclusion to this question is that yes, on regular servers, Maplestory is pay-to-win but can be played without spending any money, in which case you will progress much slower than others but can still reach end-game.

On the Reboot server, Maplestory is not pay-to-win, as everything associated with paying to win costs mesos.

Instead, the server is referred to as pay-to-play, as buying a pet is essential – learn more in our guide, Is Maplestory Pay To Win.

Differences between gameplay now and then

The gameplay in Maplestory is at its core the same. The controls are the same, the environment is still 2D, and the combat system works the same way but many classes have more skills, many of which are more complex than pre-Big bang.

As Maplestory has progressed, everything has gotten bigger.

Now, most classes feel much more powerful from the beginning of the game, and every class now has some kind of mobility, even from early levels.

It’s not like ten years ago when only some classes got a high-mobility skill later in the game. Now everyone has one almost from the start.

Numbers have also gone up significantly both the damage you deal and, of course, the health of monsters with top players dealing billions of damage per line and bosses with health to sustain such damage for a very long time.

As the focus of the game has been shifted towards end-game content and bossing at level 200+, you can level up much faster in Maplestory now.

The maximum level is now 275, which takes a long time to get to. Usually, it takes an active player a couple of months to get from level 200 to 275.

If you start a new character, you can reach level 200 within a couple of days, even if you don’t have any of the now many account-wide buffs to help you, like link skills, legion buffs, and blessings.

Contrary to old times, almost no one does party quests anymore. They do still exist and are now all accessed through the same party quest lobby map, but usually, there isn’t really anyone doing them.

The fastest way to level up in the game is now by soloing through regular training maps, doing theme dungeons, and bossing. Learn more in our Maplestory Training Guide.

There are now many more ways to increase the damage of your character in Maplestory, including potentials, star forcing, link skills, legion, blessings, flames, souls, inner ability, nodes, spell tracing, and more.

Another major update to the game compared to previous times is the 5th job, which all classes can access at level 200.

5th job allows you can unlock new powerful skills, and passives and upgrade your stats further through a vast node system.

Overall changes to the game

To give you a more detailed insight into how Maplestory has changed over the years, we’re going to cover some of the overall changes you might find interesting that don’t directly relate to the previous topics.

For European Maplestory players who’ve previously had trouble playing Global Maplestory, you can now play GMS like everyone else.

A couple of years back, Maplestory Europe and Maplestory Global merged together, allowing players from Europe to create new accounts and play on GMS.

Even though EMS and GMS merged, they are technically still separated in-game, as all European players’ accounts were moved to a separate server, Luna, which is now the European server.

Each time you log in to Maplestory now, you can choose between the North American and European regions.

All other servers in GMS, including Reboot, is American-based servers, but everyone, also new European players, can create characters on them without any problems.

Most other servers have an extremely small player population.

Maplestory now features a ton of different classes for you to play and is still releasing new ones. You can find a list of all classes in GMS as well as their DPS in our Maplestory DPS Tier List.

Even though the game has been around for a long time now, Maplestory is still being updated regularly, and new events and collaborations are being released often as well.

Another feature many players were excited about when it was released is the ability to play the game in 1920×1080, which allows you to see a lot more of the map.

While the game has been on the market for many years and has been continuously updated ever since there is still no way to natively play Maplestory on mac computers, you need a little workaround to do so.

We hope this post helps you decide whether or not you want to give Maplestory a try in 2021.

A lot has been covered in this post, but many more things have changed over the years.

If there are any other questions or topics you want to be covered in this post, let us know in the comment section below.

Also, leave a comment below if you have any input for this post you believe other people should know.

Maplestory – How To Unlock Inner Ability

Maplestory – How To Use Reward Points