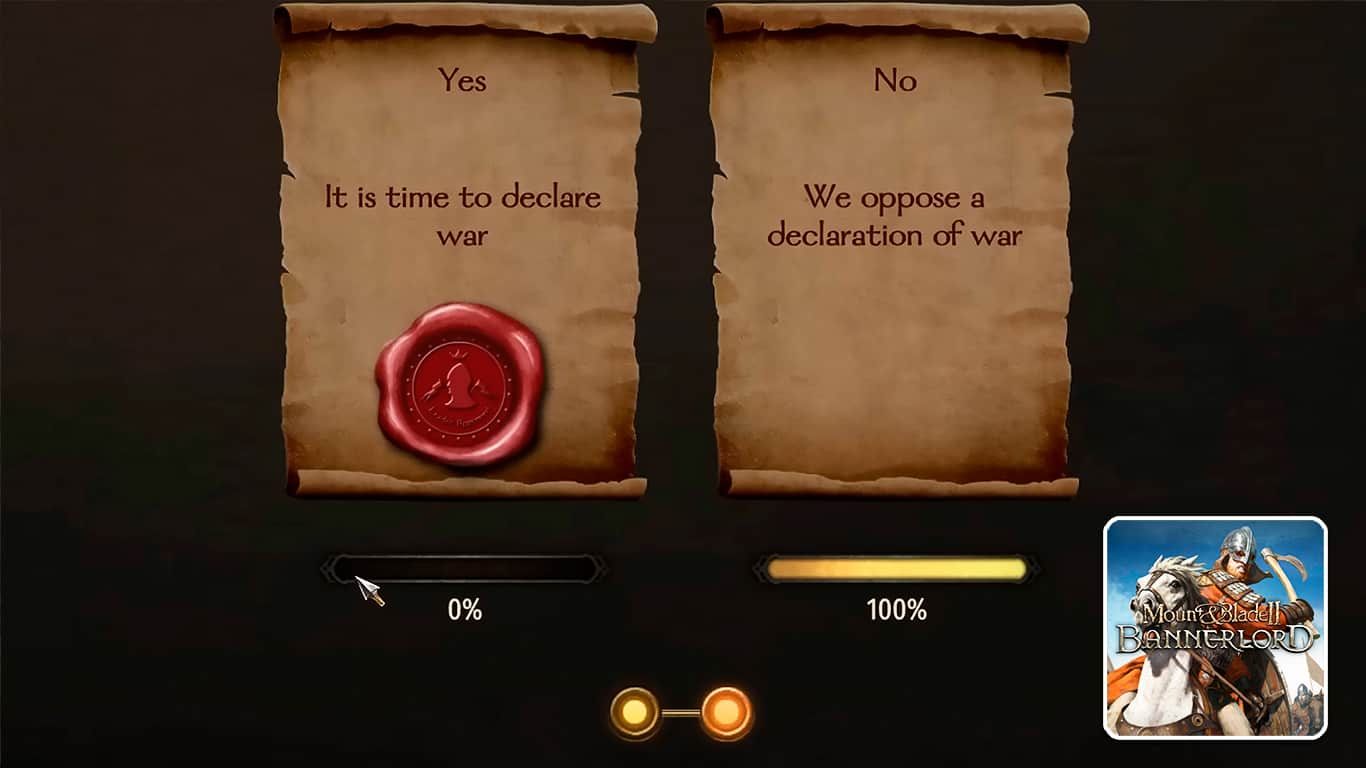 The best thing about Mount and Blade 2: Bannerlord is war. The fighting mechanics, the siege engines, and the cavalry charges are different from any other game you might have played.

However, since the game isn’t just some fighting game and actually has some strategy and diplomacy integrated in between, you need to properly declare war on your enemies before you can fight them.

Recommended Read: What Are the Best Workshops in Bannerlord?

Luckily, there are many ways you can end up at war with one of the many factions in the game, and we know all of them.

So, here is exactly how you can declare war on other factions in Bannerlord, as a single wanderer, as a vassal, or as a king.

How to Declare War in Bannerlord

There are three scenarios in which you could need to declare war in Mount and Blade 2: Bannerlord:

All of these can be different from each other as you find yourself on a different diplomatic scale. Of course, a lone wanderer wouldn’t declare war the same way a king would.

As an independent clan, there is no way to declare war diplomatically, as a vassal or king would. However, the process is still going to be relatively easy,

There are a couple of actions you can take to “declare war” as an independent faction:

By doing any of these aggressive things toward one of the factions in the game, you would immediately be at war with them. Now, you can siege castles and towns as well, which you can’t do until you declare war.

All of these actions are quite intuitive. Approach a bunch of villagers or a caravan and demand all their goods. That will always turn the conflict into an all-out war.

Or, you can talk to a lord on the field and deliver your demands. That is just a nice way of saying that you will destroy their army and maybe imprison or kill them.

Being a vassal who desires war can be one of the most annoying situations you can be in. When it comes to making significant choices, all kingdoms in Mount and Blade 2: Bannerlord feature a democratic structure.

You would have to vote on the issue with the other clan leaders who make up the faction if you wanted to select a new policy, start a war, or make peace.

To declare war as a vassal in Bannerlord, here is what you need to do:

Now you just have to pray that you have the majority. If the kingdom is already at war, they can tend to decline the war declaration.

Normal vassals usually like to declare war when your faction is strong and prosperous. It also matters if the opposing faction is at war with someone else or weakened when the vote starts.

If the vote doesn’t go your way, you can use some extra influence to sway the people your way. However, even if you spend a lot, the vote might still go to peace if the support is 0%, for example.

You could also just do what you did when you were a lone wanderer, but it will result in everyone in your kingdom hating you.

The process is extremely similar, the only difference being that you spend different amounts of influence to start the war, and you can override the decision of your vassals.

You only need to use 150 Influence to declare war as the king of a faction, and even if all your vassals are against it, you can do whatever you want.

That’s everything you need to know about how to declare war in Mount and Blade 2: Bannerlord!