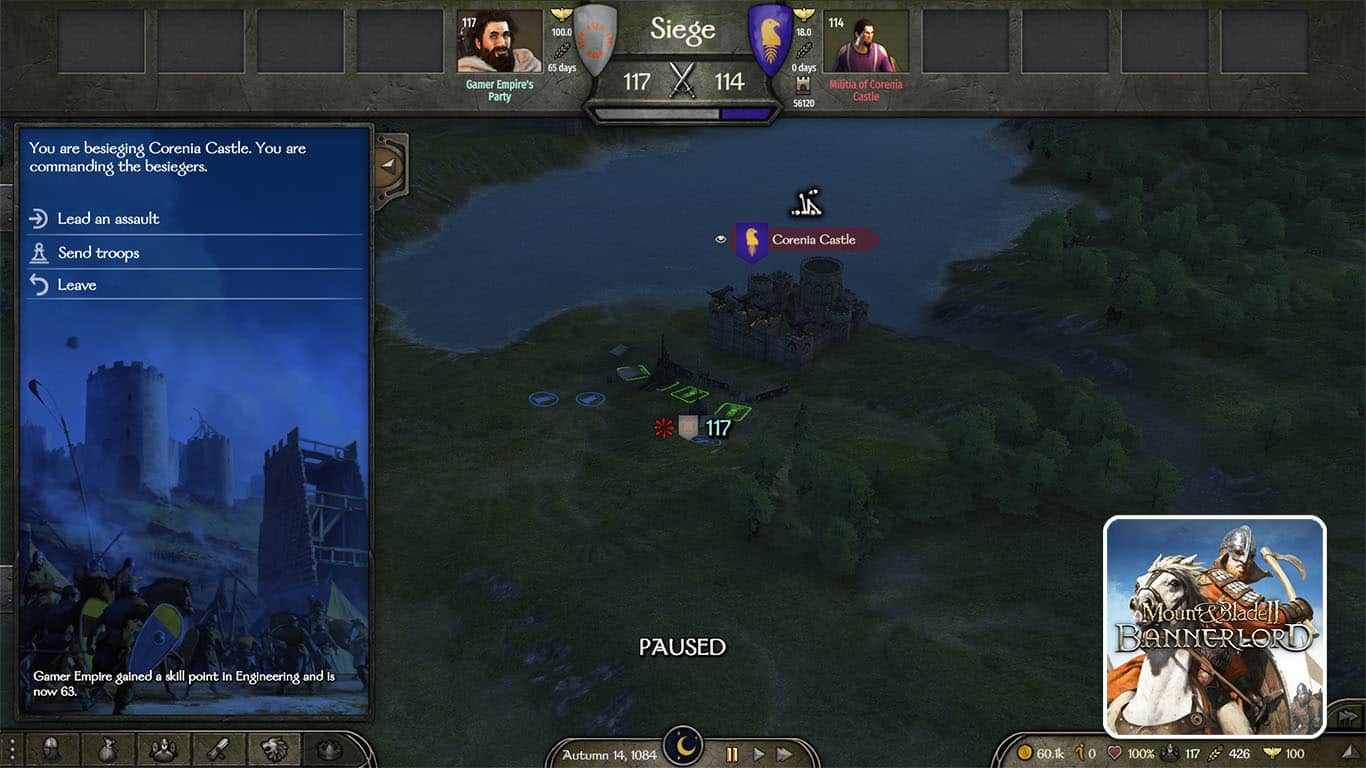 In a game of total war, sieges are one of the things you will do most often in Mount and Blade 2: Bannerlord.

Players have to be the greatest warlord Calradia has ever seen, and to do this, they will have to capture and besiege many castles along the way.

Recommended Read: How to Increase Relations in Bannerlord

However, sieges are hard if you don’t know what you’re doing. You are just looking at your beautiful catapults getting destroyed left and right.

In this guide, we will explain everything about how to siege a castle, how to even start that siege, and how to win in Mount and Blade 2: Bannerlord.

How to Start a Siege in Bannerlord

The first thing you will need is an enemy. Declare war on whomever you wish, or just attack a faction you are already at war with.

The next step is relatively simple. First of all, bring a big army. At least 150 troops. It would be best if you made an army and brought other lords of the kingdom with you as well.

To start a siege in Bannerlord, all you need to do is approach a hostile settlement, enter it, and select the “Besiege the castle/town” option, as shown in the image above.

You will now enter the Siege Camp view and will have the option to start building various siege engines. This is the part that is most important and can make or break your siege.

How to Properly Siege a Castle and Conquer it in Bannerlord

Before you can start doing anything, you will first have to build a siege camp. This can take very long, depending on the number of troops you have and how skilled your Engineer is.

Once you’ve started the siege of a castle in Bannerlord, you will have the opportunity to build various siege engines.

The siege engines you can build are:

The first thing you should always build in a siege is a Trebuchet. By building as many Trebuchets as you can, you will be able to first bring down the defenses of the castle.

This is very important to do, as your Siege Towers and Battering Rams will be destroyed by the ranged siege engines built by the castle while you were setting up camp.

Even though they take longer to build than the other two, they have a huge health bar, and even when battling many Ballistae at once, a Trebuchet can destroy at least one or two of them.

Build Trebuchets until you manage to get the upper hand in the ranged battle, and then when you destroy their engines as they get built, you can start building the close-range siege engines.

For the best results, you should build as many Siege Towers and Battering Rams as Bannerlord allows you to.

When all the siege engines are ready, and you feel like there is nothing that could stop you, you should press the “Lead an assault” button in the siege menu.

The battle itself will be straightforward. You will have to lead your troops as your Trebuchets destroy the enemies’ walls. Your other siege engines (Siege Tower and Battering Ram) will also slowly advance toward the walls.

You will just have to enter the castle, kill every troop inside, and then you are done. You managed to successfully siege a castle in Bannerlord and took it over.

Things to Look Out For

Very often, if you are the only enemy of a faction, they will probably gather an army of around 600 to 700 troops and will advance to break your siege.

If you see them coming and think you won’t stand a chance, you have to press the “Leave” and “Go On” options to get out of there.

Your troops will be disorganized, which will make you slower, but if their army is bigger, you might still have a chance to escape.

Another thing you should be careful of is the number of troops inside the castle before sieging. If they have more troops than you, they are very likely to sally out and attack you.

This can end many sieges early, as players can just lose a battle against the troops inside the castle and have to retreat.

That’s everything you need to know to siege a castle in Mount and Blade 2: Bannerlord!

Mount & Blade 2: Bannerlord – Complete Companions Guide: How to Get, Best Ones, Etc.

Mount & Blade 2: Bannerlord – How to Open the Console