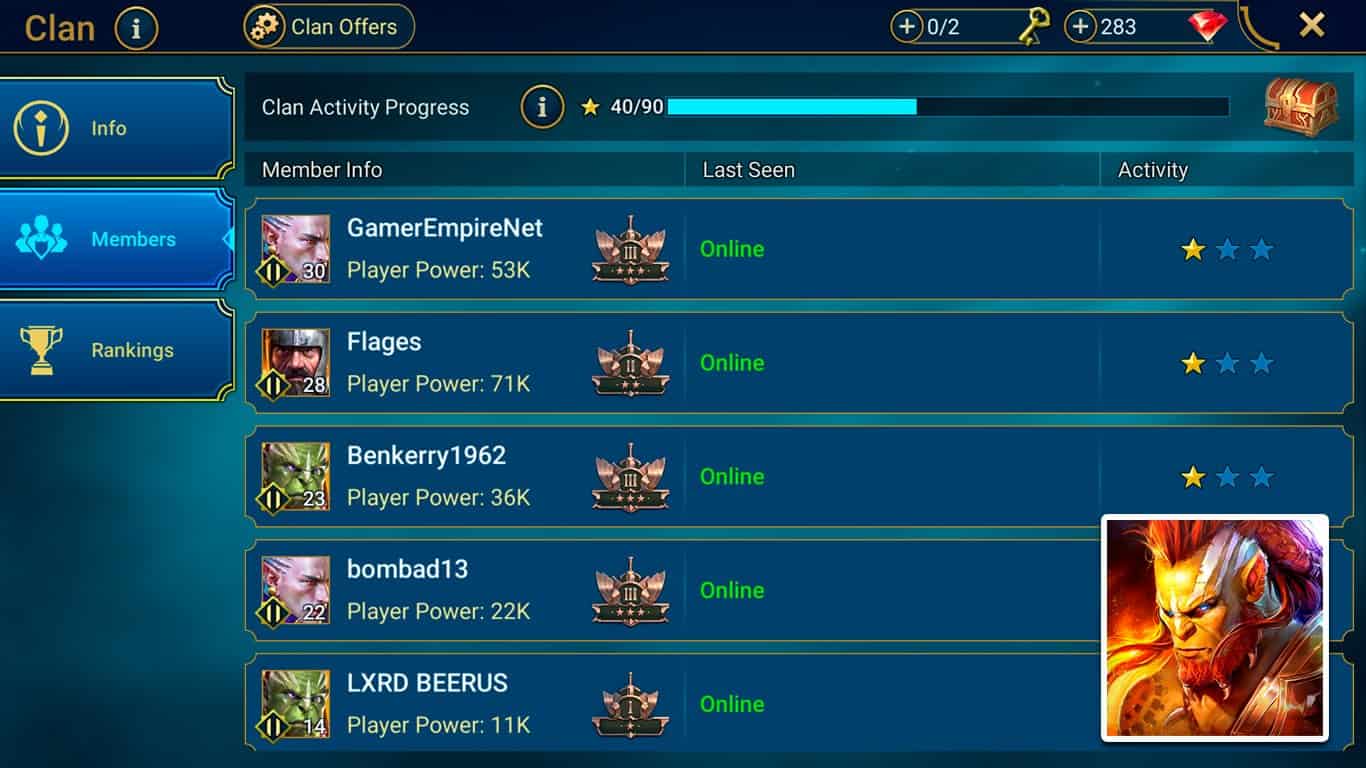 Being in a clan comes with several benefits in RAID: Shadow Legends.

Not only do you become part of a community of like-minded players, but you’ll also gain access to clan-exclusive content and rewards.

In this guide, we give you all the information you need on the clan system in RAID: Shadow Legends.

How to leave a clan

At some point, you might get tired of your current clan and wish to join another or want to create your own.

To leave a clan in RAID: Shadow Legends, go to the clan tab of the game through the ‘Clans’ button at the bottom of the screen in the City.

Select the ‘Members’ tab on the left side of the clan tab.

Finally, click the ‘Leave Clan’ button on the pop-up window of your player info, then click ‘Ok’.

You have now left your clan and can join another or create one yourself.

How to create a clan

Are you looking to create a great clan that you lead? Here is how to do so.

If you’re already in a clan, you have to leave it before you can create a new one.

To create a clan in RAID: Shadow Legends, go to the clan tab by clicking the ‘Clans’ bottom at the bottom of the screen in the City.

Click the ‘Create Clan’ button at the top of the clan tab, and you’ll be taken to the clan creation page.

On the clan creation page, you have to choose a name for your clan as well as a clan tag.

Furthermore, you have to select the primary language of the clan, the language you want the players of your clan to speak.

Once you’ve filled out these things, click the ‘Confirm’ button at the bottom of the screen.

You can change all the settings of the clan afterward, as well as choose whether or not your clan is invite-only, set a required player power level, and write a clan message and description.

Learn how to get gems in our resources guide.

How to find and join a clan

You should not hesitate to join a clan as it will give you access to clan-exclusive content and rewards.

To join a clan in RAID: Shadow Legends, click the ‘Clans’ button at the bottom of the screen in the City.

When applying to join a clan, you have to be accepted before you become part of their clan.

If they don’t accept your application, you’ll have to apply for another one.

You can apply for several clans at the same time.

Alternatively, you can use the ‘Join’ button at the bottom of the screen in the clan tab, which will instantly put you into a clan.

We recommend that new users use this feature, as it doesn’t matter as much what clan you are in at the beginning of the game.

Later on in the game, you want to join a strong clan, as you’ll get access to better benefits and rewards.

For these clans with strong players to accept your application, you need to be very strong yourself, which is why you shouldn’t bother applying to them at the start of the game.

You can tell how strong and powerful a clan is by looking at their power, points, rank, and activity stats in the clans list.

In the Clan Quests tab in the Clan menu, you can see a list of all currently available clan quests.

Clan quests are quests that you can complete for your clan, which both give the Clan itself Clan Quest Progress and you Clan Tokens.

There are three overall difficulties of Clan Quests:

There are many different types of clan quests with objectives ranging from placing X number of debuffs on X boss at X stage or higher to fully upgrading a rare champion’s skills.

To start a quest you wish to complete, click the Take Quest button on the right side. You can only complete up to 3 clan quests per week.

The list of clan quests your Clan currently has resets every week.

The Clan Shop is where you can spend the Clan Tokens that you’ve earned from completing clan quests.

Most of the slots in the Clan Shop can feature different items from a pool of items, which means that the shop does not always have the same items for sale.

You can see what items are in a slot’s pool by clicking the ITEM POOL button at the top of the Clan Shop.

Can you delete a clan?

If a clan has more than two members, which means at least one other member than the leader, then you cannot delete a clan.

This means that if you’re the leader of a clan with at least one other member than yourself, then you cannot disband it.

How to get 3 clan stars

You can earn a total of 3 clan stars for your clan every single day.

Earning stars counts toward the total star counter of your clan.

When your clan has collected the number of stars required, you can claim the clan activity chest, which contains useful items.

The number of stars your clan needs to collect to unlock the clan activity chest depends on how many members there are in your clan.

You can see the number that your clan needs to collect at the top of the screen in the members tab of the clan window.

To earn the first clan star, you just need to click the check-in button next to your name in the members list of your clan.

You earn the second clan star on a day by playing for 30 minutes, battling the Demon Lord, fighting 10 battles in Dungeons or the Campaign, and fighting 6 times in the Arena.

The final third star is earned on a day by playing for 90 minutes, battling the Demon Lord twice, fighting 20 battles in Dungeons or the Campaign, and fighting 12 times in the Arena.

You want as many members as possible to get three clan stars daily, as it’ll give your clan members the most rewards possible from activity chests.

There are several benefits associated with being in a clan, which is why you should join one.

The first is the clan bosses, which give one or two reward chests depending on the difficulty and damage your clan dealt them over a 24-hour period.

Furthermore, some missions in the game require you to face the clan bosses, and thus you cannot complete them without being in one.

Secondly, you get access to the clan vs. clan feature when you’re in a clan, which also gives you rewards depending on how well your clan performs against another.

There are also some achievements in the game that can only be achieved when you’re in a clan.

Lastly, many players enjoy being in a clan for the community aspect and clan chat.

Gaining access to clan bosses is arguably the most important aspect of being in a clan.

There are currently two clan bosses, known as the Demon Lord and Hydra, both of which are bosses that you can face through the battle menu when you’re in a clan.

Demon Lord is accessible right when you join a clan, and Hydra is unlocked when your account level reaches 45.

You face clan bosses with your own team, but you technically fight against them alongside your clan.

A clan boss’ health does not reset every time you face it. Instead, its health is shared across the whole clan.

This means that if you face one as the first in your clan after reset and deal it one million damage, the total health of that clan boss on that difficulty will be one million less until the next reset or until another clan member faces it.

In other words, your clan works together to take down clan bosses, just through separate battles.

There are a total of six difficulties of clan bosses, each of which has separate health.

You can face the next difficulty of a clan boss once you’ve defeated the previous difficulty.

Once your clan has beat a clan boss on one difficulty, they can face the next difficulty from then on every day, even if they haven’t defeated the previous difficulty on a particular day.

The more damage your clan deals a clan boss on a particular day, the better the chest every clan member receives.

If your clan fully defeats and not just damages one of the difficulties of a clan boss one day, all members receive two chests.

As the rewards you can get from clan bosses are valuable, especially when your clan starts to deal a lot of damage to it daily, we recommend you use your daily keys every day.

That’s everything you need to know about the clan system in RAID: Shadow Legends!

Have any input or questions for the clan system? Let us know in the comment section below.

Does RAID: Shadow Legends Have A Redeem Code Feature?