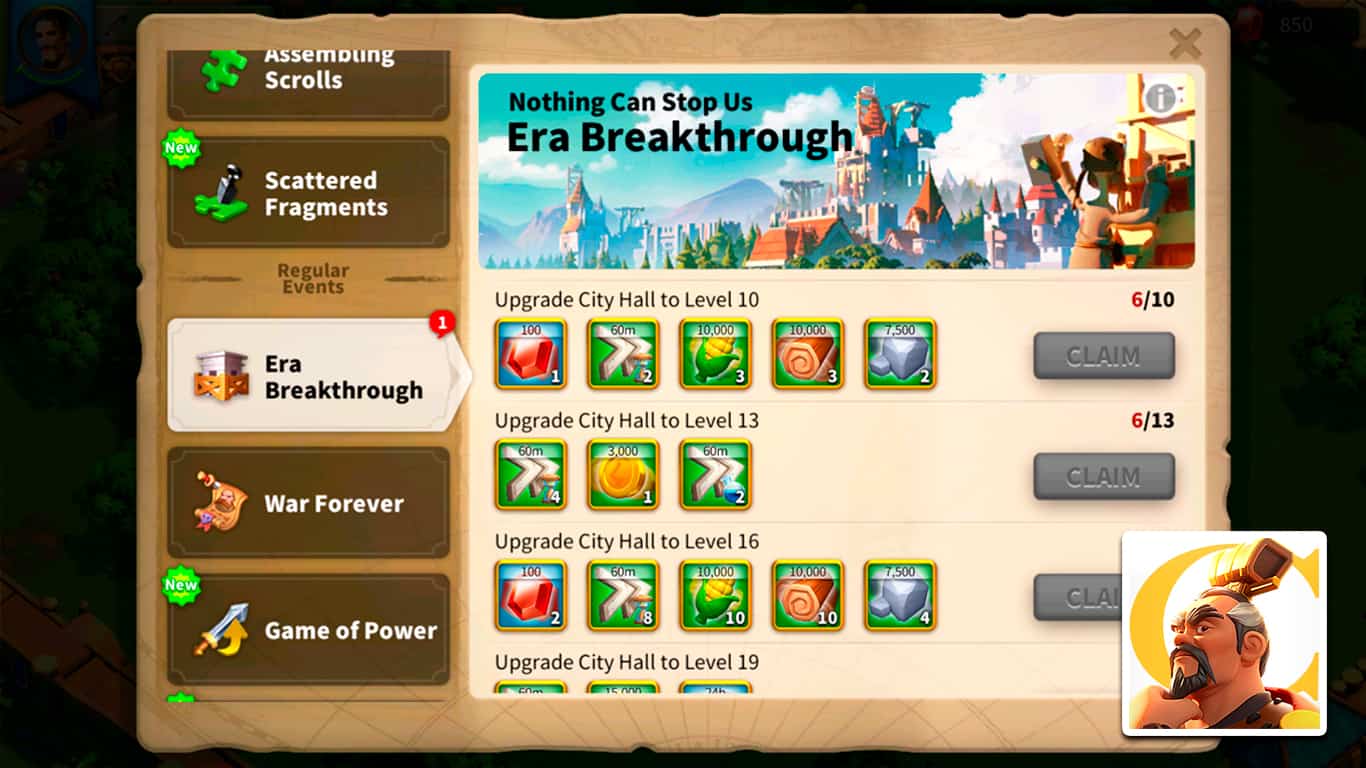 Gems are an invaluable currency in Rise of Kingdoms.

With them, you can purchase various items to speed up your progress and become stronger.

To name a few, you can buy teleports, upgrade VIP, acquire new commanders, purchase items, among many other things.

Make sure to check out our guide on the best way to spend gems in Rise of Kingdoms to optimize the value of your gems.

Luckily, there are a few ways to get the premium currency in the game – through tasks in the game or by purchasing them directly, of course.

You can get gems in Rise of Kingdoms by upgrading your City Hall, participating in events, farming forts and barbarians, completing quests, linking your account to Facebook, completing your daily goals, mining gems, being in a whale alliance, through the first occupation of an objective, and by purchasing them directly.

Upon upgrading your City Hall to specific levels, you will be rewarded with a stack of gems.

You can see the exact levels at which the reward for upgrading your City Hall includes gems in our City Hall guide.

The number of gems you receive depends on your level of City Hall.

There are also special quests and missions for upgrading your City Hall that give gems.

You will be able to collect these gems in quests tab and under Era Breakthrough through the icon in the top right corner of the screen.

Events are common in Rise of Kingdoms – make sure to keep an eye on them.

In many of them, you get gems as a reward for participating.

You will also get gems sent to your email by the developers after a maintenance update or after a system downtime, so be sure to check your mailbox.

Some examples of events include:

The Event Calender under the icon in the top right corner of the screen has a list of all the current events you can participate in.

You may get up to 10 gems for killing barbarians and destroying their forts.

It may not sound like much, but it certainly adds up in the long run.

Always go for the highest-level barbarians that you can comfortably defeat.

As you continue to kill barbarians, you will also acquire tomes of knowledge needed for upgrading commanders.

Some civilizations are better than others at farming.

Learn more in our best civilization in Rise of Kingdoms guide.

Some of the side quests in Rise of Kingdoms give some gems as a reward.

As a beginner, you will be rewarded with more gems when you complete quests such as upgrading City Hall.

Main story quests may also reward you with a lot of gems.

When an upgrade unlocks a new era, you will acquire extra gems.

Every day, you will also get new missions to complete in the Dark Forest.

Every mission gets you a different reward, some of which include gems.

Make sure to do all the missions, and the gems will slowly stack up.

Complete the missions as soon as you can to get gems faster.

You will not get explicit information on how to link your Rise of Kingdoms account to Facebook and the resulting reward while playing the game.

Well, it’s worth noting that you will be rewarded with 200 gems as soon as you bind your account to Facebook.

Linking these two pages is also a security option.

Your account will always be recoverable, and you can also shift to Android or IOS as you wish.

Here’s how to link the two accounts:

You can also get 200 extra gems by following Rise of Kingdoms on their social media under the Communities tab through the icon in the top right corner.

If you like this page, you will be rewarded with some extra gems.

In addition to other valuable rewards, you will get 100 gems when you finally get to the last chest on your “Daily Objectives” tab.

After playing for some time, you will unlock Jewelry research inside the Academy.

Once you do your research on Jewelry, you can mine gems around the map.

The gems may be scarce, but they are free, so be sure to take advantage of them.

You will need 20 minutes to fully gather 10 gems.

A whale is a term for a player who spends a ton of money on a game.

A whale alliance is an alliance with several players that spend a ton of money on the game.

Getting into one of these is no easy task.

But you will receive gems every time someone buys a chest if you get into one.

The first occupation of an objective

When your alliance gets the first occupation of an objective in your kingdom, you receive a lot of rewards, including gems.

We, therefore, recommend that you actively participate in KVK and help out your alliance if it’s trying to get the occupation of a new objective.

The final way to get gems in the game is by purchasing them directly with money.

There are many different packs you can purchase that give gems.

New packs are often released as new updates or events are released.

That’s how to get gems in Rise of Kingdoms!