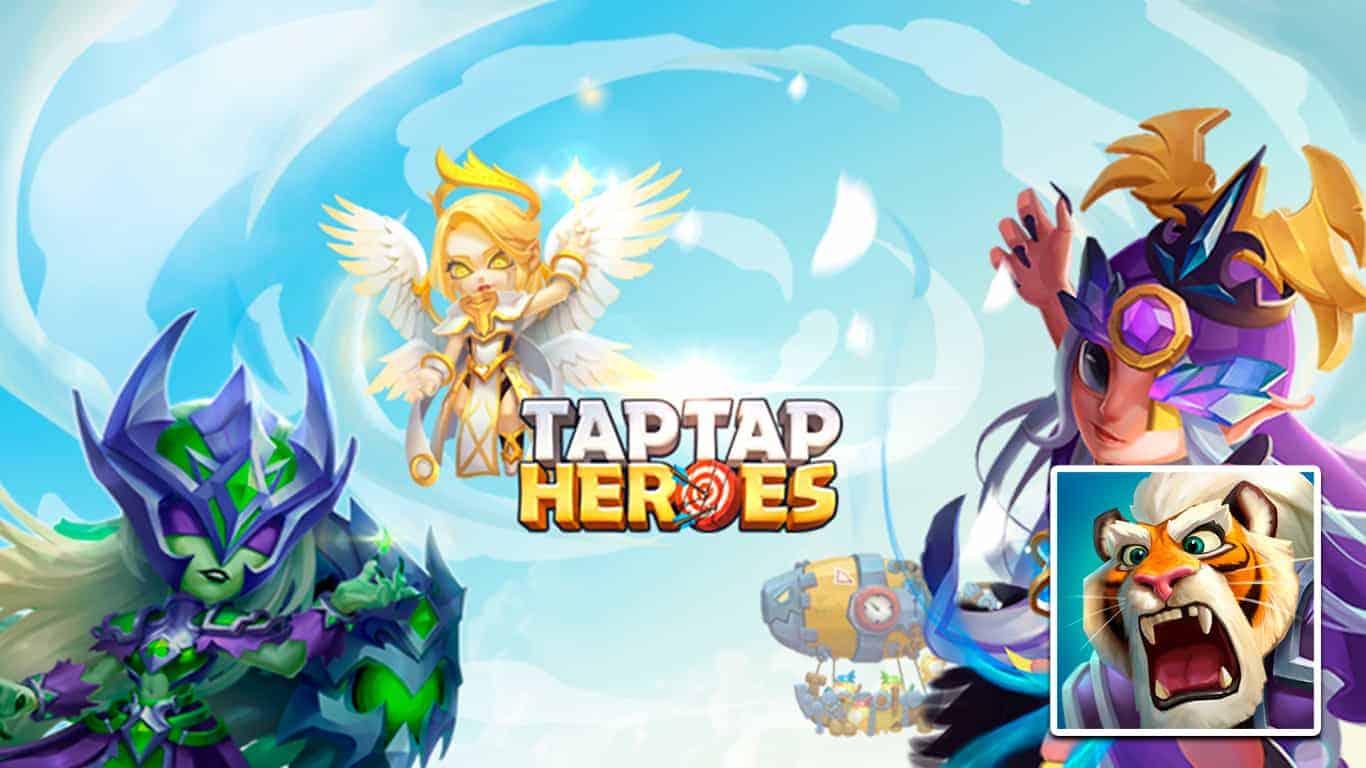 Taptap Heroes is one of those RPG mobile games where you’ll encounter and get your hands on a bunch of unique heroes throughout your adventures.

So how do you decide which ones are worth pouring resources into and bringing onto your team?

This tier list gives you an overview of the strength and usability of heroes in the game, which enables you to make more informed decisions when it comes to picking heroes.

There are a couple of heroes in Taptap Heroes that do exceptionally well on any team. These include Phoenix, Skuld, Mars, Lindberg, Freya, and Aegina.

If you pull any of these heroes, you should greatly consider bringing them onto your team – more details on these as well as other top tier heroes below.

With so many unique heroes in Taptap Heroes, all with their own skillset and playstyle, it can be overwhelming when deciding which heroes to go for and invest resources into.

This tier list aims to help you get an overview of the power of heroes in Taptap Heroes, making it easier for you to choose the best heroes for you.

A tier list like this one is a great tool when you need to find a hero to fill a specific slot, but when you come around to building your perfect team, then there are other factors to consider as well.

You can learn more about these in our team building guide.

Here is a short rundown on what each tier in this tier list represents.

S tier – Heroes in the S tier are among the very best in Taptap Heroes. S tier heroes have overwhelming power, utility, or tankiness, all of which will help you tremendously in battle. You can safely pour resources into any of these heroes, as they are sure to help you progress.

A tier – Heroes in the A tier are well above average and perform very well in battle. A tier heroes will do well for a long time, making them safe to pour resources into as well, especially if you’re early in the game. Some combinations of A tier heroes could outperform S tier heroes.

B tier – Heroes in the B tier perform as you’d expect from strong heroes in Taptap Heroes. These heroes are a fine choice to progress with for a while, but you probably want to replace them at some point.

C tier – Heroes in the C tier perform below the average hero in Taptap Heroes. You can use C tier heroes at the beginning of the game, but you should look to replace them as soon as you can.

D tier – Heroes in the D tier are among the worst heroes in Taptap Heroes that are listed in this tier list. We don’t recommend spending resources on D tier heroes as you want to replace them as soon as possible.

Attacker heroes are heroes whose primary task is dishing out as much damage as possible.

Having attacker heroes on your team is essential, as you risk not being able to do more damage than the enemy can heal and tank if you don’t have enough attackers.

As attackers focus entirely on damage, they often have very low defenses and few, if any, supportive abilities.

Therefore, you can’t exclusively use attacker heroes, but they are still very important to have on your team.

Here are a couple of the best attacker heroes in Taptap Heroes.

Lindberg is an assassin of the heaven faction and is generally considered one of the very best attacker heroes in Taptap Heroes.

Besides his incredible attack stats, he carries four skills, all suited well for battle.

His Throat Blade skill deals serious damage to 2 enemy backline heroes, enabling him to quickly take out damage dealers on the enemy team.

He has three passive skills that boost his attack, crit rate, crit damage, and energy regeneration.

All in all, an excellent choice if you’re looking for a powerful attacker hero.

Mars is a wanderer of the heaven faction who is another extremely powerful attacker hero.

Mars is a ranged hero with both high damaging abilities, but more importantly, a lot of true damage.

Having true damage makes Mars able to quickly take out heroes with high defenses, who would otherwise negate most of the damage dealt.

Mars is, in other words, a clear choice if your team struggles with taking down tanks with tons of defense and defensive skills.

Mars’ active skill is Eye Of Thunderstorm, which deals damage to 4 random enemies and has a 60% chance to stun enemies hit for 2 rounds. Eye of Thunderstorm deals increased damage when Mars’ health is below 20%.

To withstand enemy attacks throughout a long battle, having a tank is a major advantage.

Tanks are heroes with high defensive stats and preferably some skills to complement their position.

Tanks’ primary purpose is giving your team more survivability, which means they sometimes don’t have the greatest damage output compared to attackers.

Therefore, you shouldn’t bring too many tanks.

Some tanks or off-tanks do, however, pack almost as much damage as your damage dealers making them incredible heroes.

Here are some of the best tanks in the game.

Valkyrie is considered the best tank in the game by most players.

She is a warrior of the alliance factor with one of the absolute highest health and defense stats in Taptap Heroes.

On top of her high defensive stats, she also has a passive increasing these stats further and passive skills that heal allies and steal skill damage from enemies.

Valkyrie’s active skill is Gungnir, which damages all enemy heroes at once and reduces their attack by 20% for 3 rounds.

Valkyrie is, because of all these factors, one of the best tanks in the game.

Monkey King is an interesting pick if you’re looking for a tank.

His defensive stats are not as great as Valkyrie despite them being well above the average hero.

Monkey King, a warrior of the hell faction, has one thing Valkyrie lacks a bit, damage.

Monkey King will, despite being an excellent tank, deal the same amount, if not more damage than the attackers on your team.

The reason for this is primarily Monkey King’s passive skill, Fight Against Buddha, which gives him a 100% chance to attack an enemy, when Monkey King is attacked.

Having Monkey King in the front as a tank will make him tank hits over and over, which will activate Fight Against Buddha over and over.

The result is a tanky hero that slings out a ton of damage throughout a fight.

Monkey King also has a revive skill, Buddha Rebirth, which makes him revive with max health and 30% increased damage for three turns upon reaching 0 health.

Lastly, Monkey King’s active skill, Boundless Strike, deals damage to the entire enemy backline and applies a mark, which deals a lot of damage when triggered.

If you’re after both tankiness and damage, Monkey King is a great choice.

Though support heroes might not seem that useful as most don’t have a high damage output nor defensive stats, support heroes are often the deciding factor in how powerful a team is.

If your team doesn’t have any support heroes, chances are you’ll lose to those that have.

Here are a couple of the best support heroes in Taptap Heroes.

Skuld is a cleric of the heaven faction with immense healing skills and utility.

Having healing on your team is a major advantage in longer fights, which is where Skuld comes in.

Her primary healing comes from the passive skill, Baptism of Light, which heals 3 random allies every time Skuld uses a basic attack.

Skuld revives the first hero on your team to die in battle, bringing them to 77% health while giving the rest of the team a hefty heal at the same time.

Lastly, Skuld’s active skill, Divine Revelation, both damages all enemies, increases true damage for the entire team, heals all allies, increases crit rate, and has a 77% chance to remove all controls.

All in all, making Skuld one of the best supports in the game.

Another amazing support hero who focuses on buffing the damage of your team is Phoenix, a cleric of the horde faction.

Phoenix deals a lot of damage to all enemies through his active skill, Red Lotus Firell, which also applies a burn for 3 rounds.

Furthermore, Phoenix’s active skill has a 77% chance to reduce enemy defense, adds 100 energy to a random ally, and increases attack by 30%.

Besides the burn from Phoenix’s active skill, his first passive skill applies a burn effect on the enemy with the most health as well while decreasing their attack.

This skill increases all allies’ damage by 30% on targets burned by Phoenix.

Lastly, Phoenix also has the ability to resurrect him once per fight while healing all allies for 5 rounds.

If you need someone to boost the damage output of your entire team, Phoenix is an obvious choice.

That’s our take on a tier list on the best heroes in Taptap Heroes as well as the best attacker, tank, and support heroes.

How To Download & Play The Walking Dead: Road to Survival On PC (2022)