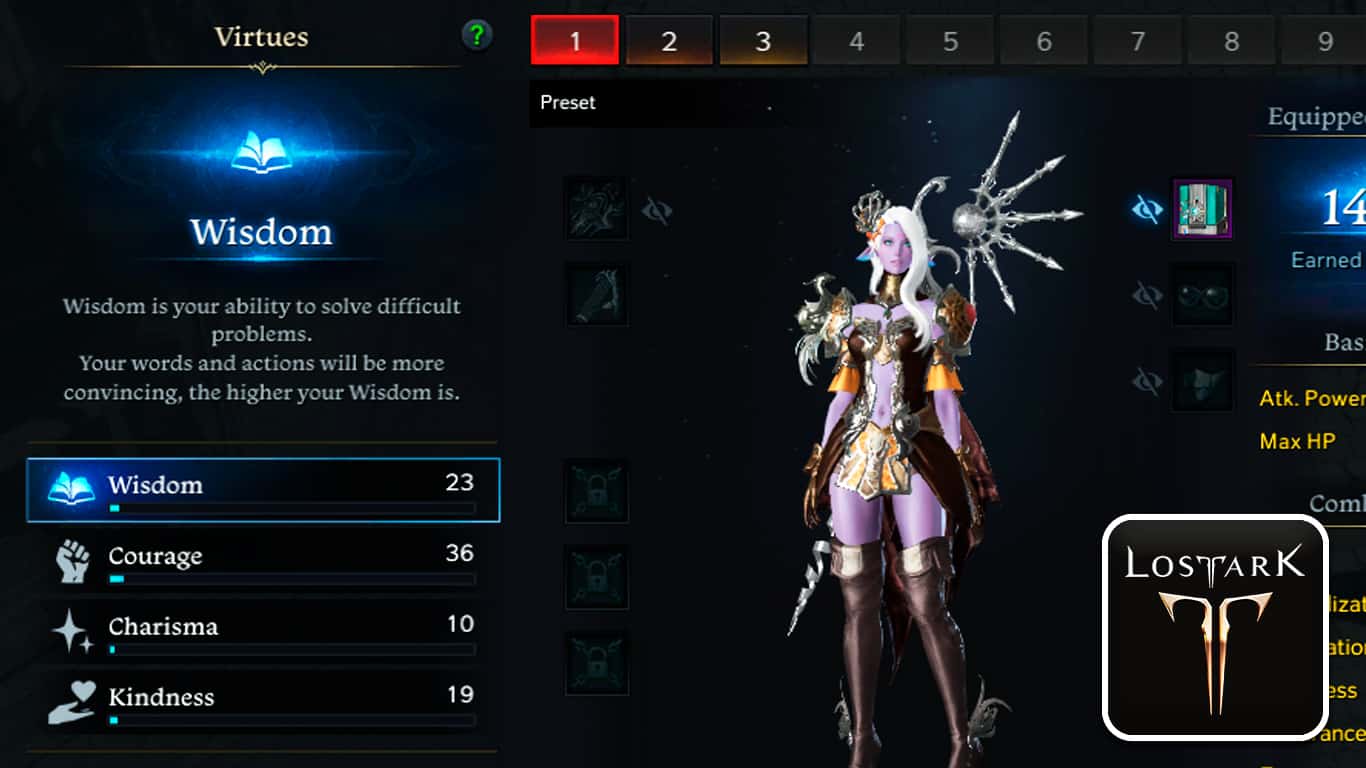 There are tons of systems in Lost Ark that you need to know about, and Virtues is an important one that isn’t obvious what is for when you start playing the game.

Virtues, or Virtue Points, are similar to the reputation systems in other games like World of Warcraft, where you build up a reputation in certain aspects or with certain groups.

Instead of reputation with a certain group of people in Lost Ark, Virtue Points act as your character’s reputation or experience in certain personality traits.

There are four Virtues in Lost Ark, each representing a personality trait – Wisdom, Courage, Charisma, and Kindness.

You need a specific number of Virtue points to interact with and unlock special quests from some NPCs in the game, including those you can build a relationship with through the Rapport system.

There are several ways to increase the Virtues of your character in Lost Ark, including completing achievements, unlocking rewards in the Adventurer’s tome, earning collectibles rewards, completing quests, Una’s Tasks, the Rapport system, and equipping skins – find more information below.

What are Virtues and their purpose?

Virtues or Virtue Points in Lost Ark describe how experienced your character is in various personality traits.

Virtues, or Virtue Points, work the same way as reputation works in other MMORPGs, where having a higher reputation in a certain aspect or with a certain group unlocks new possibilities.

In Lost Ark, Virtues also unlocks new possibilities, as you need a certain number of Virtue Points to interact with and unlock special quests from some NPCs.

Virtue Points are important when building relationships with some NPCs through the Rapport system, as you cannot even interact with some of them without having enough Virtue.

In other words, you cannot earn affinity for the Rapport system from some Rapport NPCs if you do not have enough Virtue Points.

There are four Virtues in Lost Ark:

Each of these Virtues represents a different personality trait, and each one has a separate Virtue Point value.

Some Rapport NPCs have no Virtue requirements for interaction, while others require a certain number of Virtue Points in specific personality traits.

Virtue Points do not directly give any stat boosts or power increases, but the opportunities that you unlock from having higher Virtue can lead to rewards that can increase your character’s power. Therefore, it’s a great idea to work on your character’s Virtue.

How to get Virtue Points

Increasing your Virtues in Lost Ark is essential to get the most out of the Rapport system.

Here are the different ways to get Virtue Points to increase your character’s Virtue in Lost Ark:

Some achievements in Lost Ark give a title as a reward, and some of those titles give Virtue Points to your character.

You can see whether or not a title gives you Virtue Points by selecting it in the Titles menu, located under Roster in the bottom-right menu. When selected, the title will display ‘(earns) X +Y’ next to its title name under the list of titles, with X being the icon of the Virtue or Virtues it boosts and Y the number of points it increases it/them by.

You don’t have to wear a title to get the Virtue Points from it. If a title gives any, you’ll permanently have them added to your Virtue from the time you acquire it, even when you aren’t wearing the title.

The Adventurer’s Tome is full of objectives for you to complete, enemies to defeat, and items to collect.

Some of the rewards that you get from completing a percentage of a continent in the Adventurer’s Tome are items that increase points in a Virtue.

The Collectibles codex, like the Adventurer’s Tome, gives items that increase points in a Virtue as some of its rewards. You unlock rewards by filling out collections, which you do by finding Collectibles.

Some quests in Lost Ark increase your Virtue when completed or give Virtue-increasing items as a reward. These are usually sidequests that aren’t related to the main story.

Una’s Tasks are quests that you can complete daily and weekly upon reaching level 50. Some of the quests give virtue-increasing items.

One of the rewards from doing the Rapport system and thereby Rapport dialogue is Virtue Points.

Though some Rapport content requires a certain number of Virtue Points, some don’t or require less and can help you get more.

Yes, Virtue Points are shared across your roster of characters in Lost Ark. When you increase your Virtue on one character, your other characters benefit from it as well.

Most of the things that you earn Virtue Points from are also shared with your roster, like Collectibles collections, which is why it makes sense that Virtue is shared across your roster of characters too.

The only part of Virtue that isn’t shared across your roster of characters but rather the individual character is Virtue Points earned from the skins a character is wearing.

Because Virtue Points earned from skins a character is wearing aren’t shared with the roster, each character might have slightly different Virtue Points, depending on what skins they are wearing.

Where can you see your character’s Virtue Points?

You can see the Virtue Points of your character by opening the Character Profile and selecting the Skins & Virtues tab.

To open the Character Profile window, either click the ‘P’ key on your keyboard or click Character in the bottom-right menu and select Char. Profile.

In the Skins & Virtues tab of the Character Profile, you can see the character’s Virtue Points in each trait on the left side under Virtues.

The only difference between the individual characters’ Virtue Points are those obtained from the skins that they are wearing.

That’s all you need to know about the Virtues system in Lost Ark!

Lost Ark – How to Leave a Party

Lost Ark – How to Get the Angry Emote: Does It Exist?