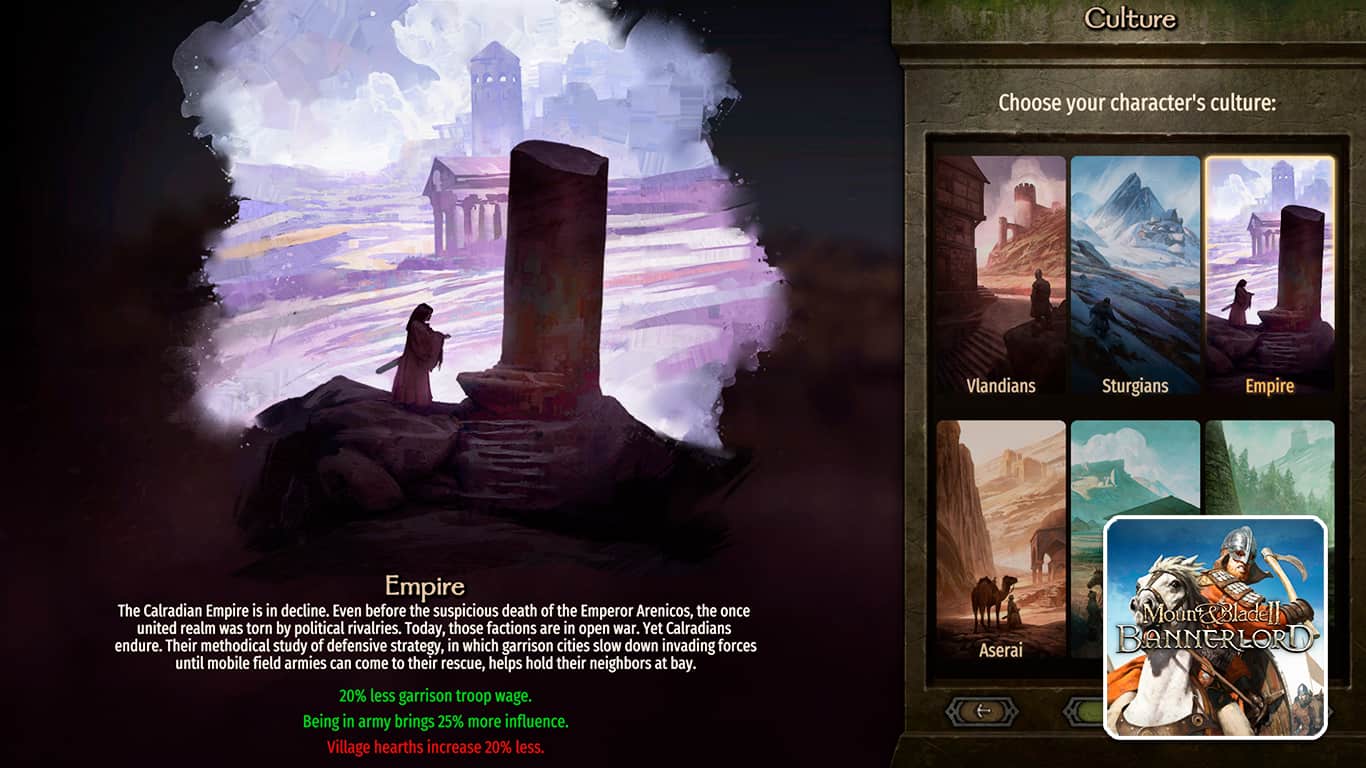 There are eight factions and six cultures to choose from at the start of Mount and Blade 2: Bannerlord.

Each of these is very different, as they all get attributes from various historical nations, such as the Norse, Roman Empire, and Mongols.

Recommended Read: Can You Level up Workshop in Bannerlord?

The game is mostly balanced, and most of these factions have the same difficulty when it comes to world conquest.

However, there are some that are definitely superior, so here is a best factions tier list for Mount and Blade 2: Bannerlord, to decide what kingdom you shall help to rule them all.

We will now rank all the factions in Bannerlord. Don’t worry, we will explain afterward why we have ranked one above the other.

Here are the best factions in Mount and Blade 2: Bannerlord, in order of best to worst:

You might be wondering why we put all the Empire factions together. Well, besides the difference in leaders and map positions, the gameplay is the same.

The Empire troops are the best overall troops in Bannerlord, as they can field amazing archers, infantry troops, and cavalry. If you ever have to make a versatile army, the Empire factions are the best location for that.

Another beautiful thing about starting in the Empire is the civil war. Normally, that wouldn’t be good, but because of this, you can conquer 2 kingdoms that have the same culture.

This just means that you won’t have to deal with any annoying rebellions and the horrendous Different Culture debuff to loyalty. You can defeat and conquer the other Empire factions and become the most powerful kingdom in the world.

This also makes this starting point the best if you would want, in the future, to start your own kingdom from scratch.

You will also be in constant wars. This would normally sound bad, but this is Mount and Blade. If you don’t want to fight, why are you playing this?

Players will be surrounded by enemies but will get the best troops in the game along with some of the richest provinces in Bannerlord.

Though the village hearth culture disadvantage is pretty big, the low wages for garrison and bonus influence make up for it.

Indeed, the lowered garrison wages will be huge in the late game, when you will have to pay hundreds of thousands of gold on the stationed troops.

Since influence will become extremely important in the mid to late game, the army influence perk will be extremely useful if you also start the game as an Empire native.

The main reason Battanians get such a high position in this Bannerlord tier list is the incredible culture bonuses they get.

Every advantage that you can get in forests is very useful. There are forests everywhere on the map, which means that you can easily decide when and how you fight other parties.

The +1 militia bonus is also great since you can defend most of your towns using these free, willing troops. Also, the debuff the Battanian culture gets is very insignificant, so they would be a great starting faction.

A little disadvantage might be their position. They are surrounded by enemies and will constantly be at war with at least one of them.

On the other hand, their towns sell some of the cheapest resources in the early game, making them a great spot for future Smithing masters.

When it comes to troops, the Battanian archers and infantry troops dominate the wooden areas of the world. They have a bit of a disadvantage on plains, as cavalry charges can instantly destroy whole battalions.

Bannerlord’s Khuzait faction could easily get an S ranking if it weren’t for their horrible culture bonuses and weak sieging potential.

Let’s start with the positives: their horse archers rule the world. The only troops that stand a chance against them are heavy cavalry, but even they can be avoided with good skirmishing.

Archery has always been overpowered in Mount and Blade 2: Bannerlord. However, combine it with horses, and you get a behemoth that can’t be stopped… on the battlefield at least.

The Khuzait’s troops are not the best in sieges. They do shoot a lot of arrows at the defenders, and their top-tier infantry troops are great. Nevertheless, most players that choose the Khuzaits make an army of 90% horse archers.

Another bad thing about them is the lowered town taxes. These are really bad when trying to roleplay as a normal medieval vassal and not as a genius merchant.

The reduced cost for mounted troops is decent but not enough to make the lowered taxes worth it. These horrible cultural bonuses probably exist to counterbalance the extreme military prowess of the Khuzaits.

So, if you do love fighting, archery, and extremely long polearms, choose the Khuzait faction.

The Vlandian faction is an interesting one. If the Empire didn’t exist, they would probably take their place as the best faction in Bannerlord.

When it comes to troops, their sheet is one of the most balanced out there. Their crossbowmen are amazing in sieges, and their cavalry is unstoppable.

Their cultural bonuses are also very useful. The Vlandians are incredible at the beginning of the game with that renown and increased mercenary income. This could be a great start for someone that wants to be king.

Their disadvantage isn’t that bad either. Influence is hard to come by, but that 20% increase in price won’t kill you.

Last but not least, the production bonus to the villages is a very neutral buff. It’s good, of course, but it isn’t amazing in any way. One could say that it was added just to balance things out.

Their location is one of the best in the early game. They border three factions but only actually share a large border with Battania.

Due to this position, they can concentrate on the Battanians while occasionally skirmishing with the Sturgians and the Empire.

The Aserai are a great faction, however, there are some facts about how they work that just make them a bit inferior compared to the others.

The first problem (which some may call the best part about them) is their priority on trade. This makes them a country that should prioritize peace rather than war most of the time.

Even their best perk, the fact that they get no penalties in the desert, is also a defensive trait. Why? Since the only place on the map with deserts is the Aserai’s territory.

This does let them dominate and easily control and defend their regions, however, they wouldn’t be the best choice if one was interested in a world conquest.

Their cultural disadvantage is very minor and won’t make a difference during the gameplay.

In regards to troops, the Aserai have some very good cavalry troops. They are also pretty balanced when it comes to archers and infantry.

The best part when it comes to fighting along the Aserai has to be their amazing heavy cavalry. Another reason why the Khuzait is not S rank is because of the Aserai’s ability to tear their mounted archers apart.

Sturgia is a weird faction. They are the ones most people will choose when starting Bannerlord for the first time. Russian Vikings, that has to be cool, right?

However, the Sturgians tend to disappoint, as they often lose in most campaigns, even without the intervention of the player.

The problem with Sturgia is that it is situated in very hostile terrain, and they don’t get any advantages to combat this. The snow, forests, and mountains will make their armies move slower than one could even imagine.

Sturgia should be positioned well to defend itself. Nevertheless, their main opponent always tends to be the Khuzait, which roll over them with their million-horse army.

They have some decent archers and infantry troops. Despite expectations, their best troops are the noble cavalry, which is extremely hard to come by.

All in all, the Sturgians should have been a fun and interesting faction, but they always end up being bullied by their neighbors.

That’s everything you need to know about the best factions in Mount and Blade 2: Bannerlord!