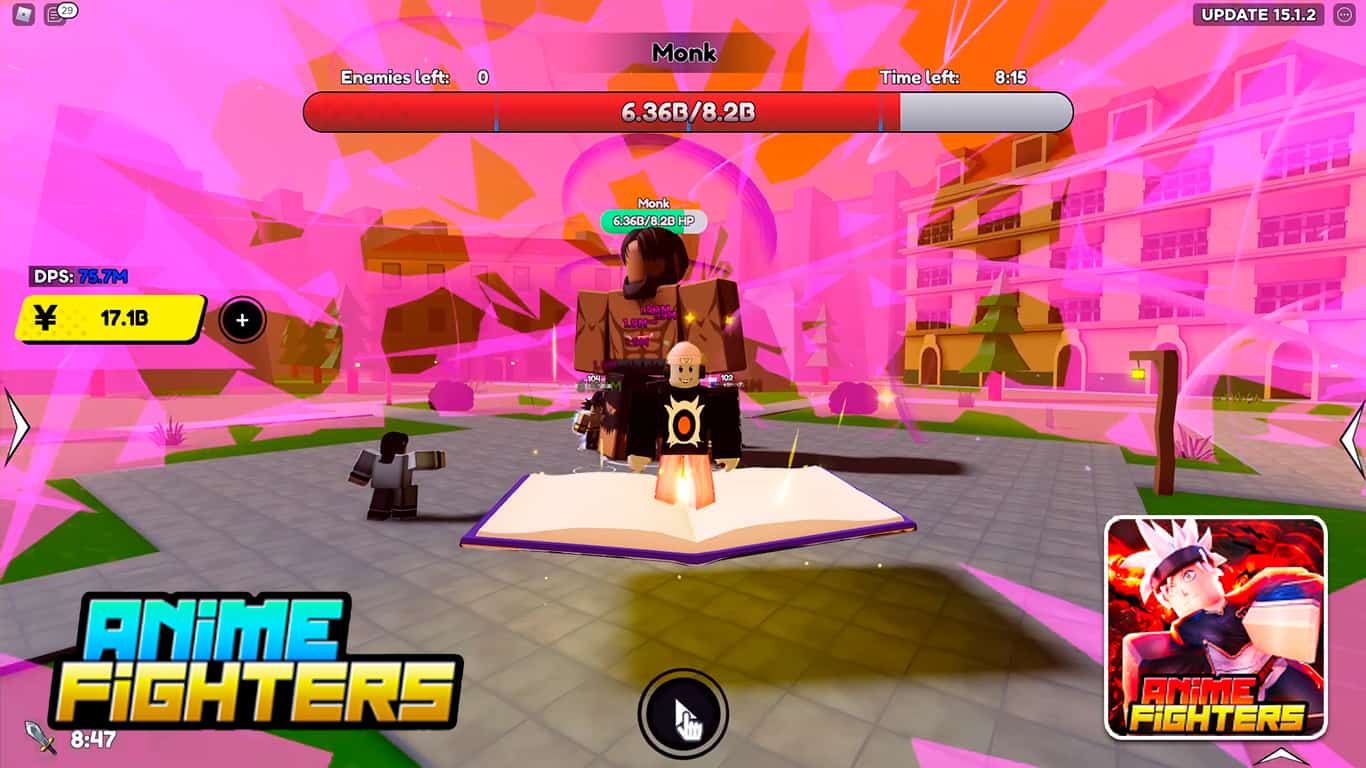 In Anime Fighters Simulator, you won’t just be facing the bosses that appear regularly in each world, but also much stronger bosses in raids.

Raid bosses are massive bosses with tons of HP that you can find in each world of the game.

Unlike regular bosses that appear like normal enemies, you can only face raid bosses when the raid for them is open, and there is a time limit that you have to defeat them within. Otherwise, you fail and don’t get any rewards.

Defeating raid bosses can help you progress faster in the game, as the rewards that you get upon completing a raid can be used to craft strong characters.

In this guide, we give you all the information you need about raids in Anime Fighter Simulator.

Raids are battles against powerful bosses with tons of HP that can appear in each world of the game.

Unlike when you fight regular enemies, there is a time limit in raids.

If you don’t defeat the raid boss within the time limit, you lose and get no rewards.

A raid consists of the raid boss and the enemies that it summons.

Each world in the game has its own unique raid and raid boss, as well as raid shards.

How to get raid tickets

You need to have a raid ticket before you can enter a raid in the game.

You can get raid tickets in Anime Fighters Simulator from the Time Trials shop, the raid entrance shop, the Daily Wheel, promo codes, and the daily free claim.

There are two types of raid tickets in the game with different expiration times:

As Daily Raid Tickets expire after only one day, be sure to use them before they expire.

In the Time Trials Shop, you can purchase Raid Tickets for 80 Time Shards.

You can also purchase an upgrade from the Time Trials Shop for 2,000 Time Shards that allows you to claim an additional Daily Raid Ticket in your Inventory.

The Daily Wheel located on the right side of the screen has a 13% chance to give you a Raid Ticket.

Every 24 hours, you can claim a Daily Raid Ticket by opening your item inventory on the right side of the screen and pressing ‘Claim’.

Raid Tickets can also be purchased directly at the raid entrance for 99 Robux each or 199 Robux for 3.

At the beginning of the game, it can be difficult to get your hands on Raid Tickets, as you won’t be able to farm Time Shards quickly.

Therefore, we recommend spending your Raid Tickets wisely early on in the game.

If nobody else has joined a raid and you are unsure that you can solo it, you might want to not attempt to do so, as it’ll cost one of your valuable Raid Tickets.

How to do raids

Raids are not always open for entry, like Time Trials.

Furthermore, each world in the game has its own raid, and only one raid can be open at a time.

So, you might have to wait a while before the raid that you are looking to do becomes available.

A new raid opens for entry every 30 minutes in the game.

You can see what raid is opening for entry by looking at the message ‘Something is rumbling in X world’.

When that message appears, the raid in the displayed world will open for entry within a minute or so, and the raid itself will then start after 15 minutes.

You can see how long till a raid starts by the timer above its entrance, which looks like this:

If the raid message instead says ‘Something MASSIVE is rumbling in X world’ instead of the usual one, the raid is massive and is going to be much harder than normal but will also give more shards.

Once you’ve entered a raid and the timer has counted down, it’s time to fight the raid boss.

At the start of a raid, the boss has a shield that prevents you from dealing damage to it.

To remove the shield, you have to defeat the enemies that it has summoned.

Once you bring the boss down to 75%, 50%, and 25% health, the shield will appear, and you have to defeat more enemies before you can damage the boss again.

Raids can be carried out alone or with other players on your server who also join the raid.

It can be difficult to defeat a raid, especially if you are soloing them and the raid is in a later world, but they give very useful rewards.

How to get raid shards

Shards, also known as raid shards, are important to your progress in the Anime Fighters Simulator, especially later on when you need to reroll passives.

Raid shards are the reason why you should do raids in the game.

You get raid shards in Anime Fighters Simulator by completing raids.

Upon completing a raid, you get between 3 and 5 of the world’s shards if it’s a regular raid and 13-15 if it’s a massive raid.

If you do not defeat the raid boss within the time limit, you get zero raid shards.

There is also a small chance that you get a raid shard when defeating the regular boss in a world in Anime Fighters Simulator.

By farming a bunch of regular bosses, through AFK farming, for example, you can over time acquire a lot of shards.

You can use the shards to either craft characters or reroll the passives of characters from the same world as the shard.

Crafted characters are some of the strongest in the game. Check how they rank in our Anime Fighters tier list.

Every single world in the game has its own unique raid boss and shards.

The further into the game you get, the harder the raid becomes.

Here is a complete overview of all raids and raid bosses in Anime Fighters Simulator.

Raid bosses in Anime Fighters Simulator have a bunch of HP, much more than the enemies you’ll find in the same world.

The combination of a time limit and the large amounts of health raid bosses is what makes raids difficult.

How much HP a raid boss has depends both on what world the raid is in, how many players are in the raid, and the progress of each player.

In other words, the raid boss’ health is automatically adjusted to the expected damage output of each player in the raid.

By having this system, you don’t face a boss that you have no way of defeating when doing a raid alone, nor can you go in and one-shot a raid boss from a previous world after progressing to later ones.

Here is a complete overview of the base HP of all raid bosses in Anime Fighters Simulator for both the regular and massive raids. Their health is based on you having reached Icy Wastes.

Data for the HP of raid bosses are from Anime Fighters Simulator YouTuber Tibur.

Besides having a Raid Ticket or Daily Raid Ticket, you need to find a raid entrance to enter a raid in Anime Fighters Simulator.

Unlike Time Trials and Defense Modes, raids do not have a specific spawn time or location.

Every 30 minutes, a raid in a random world will appear, but there is no guarantee as to which world will have its raid opened.

You can see in which world a raid has appeared in either by keeping an eye out for the raid message, which says ‘something is rumbling in X world’. Alternatively, you can look for the raid entrance icon in the world teleport list.

The location of a raid entrance is easy to find once you’re in the world where a raid has spawned. Just look from side to side in the spawn area, and you should see a large beam to the sky with a timer on it somewhere on the island.

Walk towards the beam, and once you’re close enough to it, you can choose to spend a Raid Ticket to enter the raid.

Daily Raid Tickets will automatically be prioritized over permanent ones.

That’s everything you need to know about raids in Anime Fighters Simulator!

Shindo Life (Roblox) – How To Get Ramen