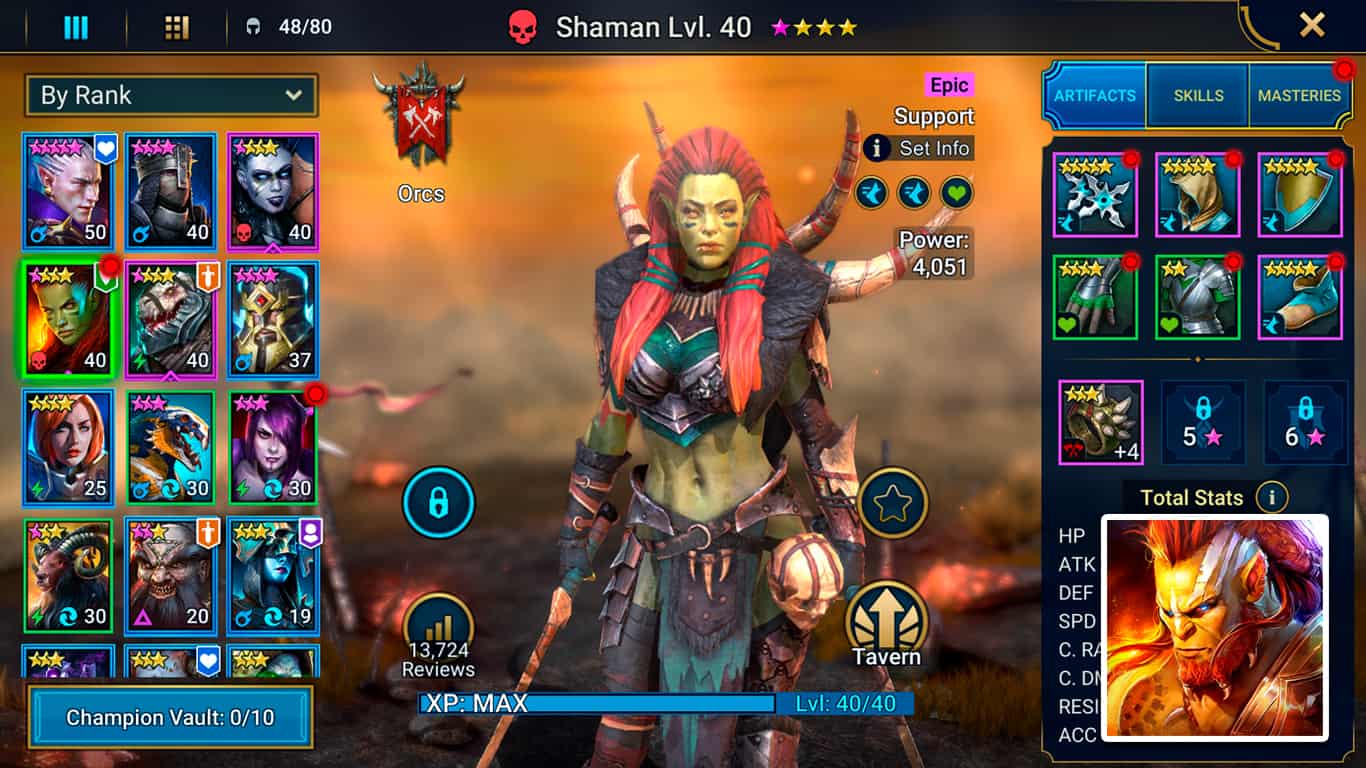 Shaman is a powerful support champion in RAID: Shadow Legends awarded after claiming day 7 of the new players’ rewards system.

As Shaman most likely will be the first Epic champion you obtain in the game, you’ll probably end up using her on your team for quite a while.

In this guide, we give you all the information you need on Shaman, including how to build her masteries, the best artifacts and sets for her, as well as her skills.

Shaman is a useful support champion from the Orcs faction.

She is the easiest epic champion to acquire in the game, as you get her on the 7th day of claiming new player rewards.

Shaman has the red Force affinity.

Most players use Shaman on their team for a while in the game, as she is one of the best champions you are guaranteed to get right at the beginning of the game.

She does deal a decent amount of damage, but the main reason why she is as useful as she is, is her revive skill and buff.

Her revive skill, recall, is especially useful in Faction Wars, as she can help you obtain three stars in those stages.

Shaman’s second attacking skill, Exploit Weakness, increases the critical rate of all allies by +15% for two turns, which is a powerful buff.

Shaman usually doesn’t rank well in our RAID: Shadow Legends tier list, but she is still a great champion to use early on when you don’t have many other champions to use.

Shaman is a support champion whose value lies in her supportive skills, and thus she shouldn’t be built as an attacker.

You can go different routes in terms of the sets you choose to build on Shaman, but these are generally the best options:

Both of these builds revolve around increasing Shaman’s speed.

The first one focuses on increasing her HP a bit, so she can sustain better throughout battle.

The stats that you want to focus on when building Shaman, which means the stats you want on your Gloves, Chest, Boots, and Accessories, are the following:

If you’re looking to build a hybrid Shaman that both acts as a support and a damage-dealer, you should focus on % Attack and Critical Rate.

However, we recommend just building her as a support.

Even though Shaman is a supportive champion and should be built as such, it’s still best to go for the support and offense mastery trees.

The defense mastery tree can be useful for Shaman.

However, most people agree that they are more suitable for actual tank champions, which is why they go for offense masteries over defense ones.

You do, of course, want to invest heavily in the support mastery tree, as many of the supportive masteries greatly benefit Shaman’s skills.

The following is a supportive + attacking hybrid masteries build for Shaman.

The graphic is created with Raidbro.

Here are the masteries in a list, starting from the first mastery in the tree to the last one.

This masteries build has been created by Elite Chofly.

Shaman has three active skills and one passive aura.

One of her active skills is purely a supportive skill, while one is both an attack and buff, and the last only an attack that has a chance to remove a buff from the target.

Here is a complete overview of all Shaman’s skills as well as the upgrades of each one.

Attacks 1 enemy. Has a 25% chance of removing 1 random buff from the target.

Dispelling blow is Shaman’s basic attack that deals damage and has a chance to remove a buff from the target at the same time.

This is Shaman’s critical rate buff that activates upon Shaman using this skill on any enemy.

Revives an ally with 25% of their HP.

Places a [Shield] buff on the target equal to 20% of the target’s HP.

Shaman’s revive skill is very useful in the Arena as well as for gaining three stars in Faction Wars.

This passive buff is only active for your team when Shaman is placed in the Leader position of your team.

As this Aura effect only boosts your team when you’re in Faction Crypts (Faction Wars), do not put her in the Leader position of your team in other game modes.

If you choose to build Shaman purely as a support champion, which we recommend that you do, then the following stats should be prioritized.

You might also want to increase the overall tankiness of Shaman by adding some gear with DEF on it as well.

If you’re building Shaman as both a support and an attacker, then you want to prioritize the following stats.

Speed is by far the most important stat for Shaman because of her supportive capabilities will greatly improve with a higher speed stat.

HP is great for Shaman as it’ll allow her to sustain for longer during battles.

That’s our guide on the champion Shaman in RAID: Shadow Legends!