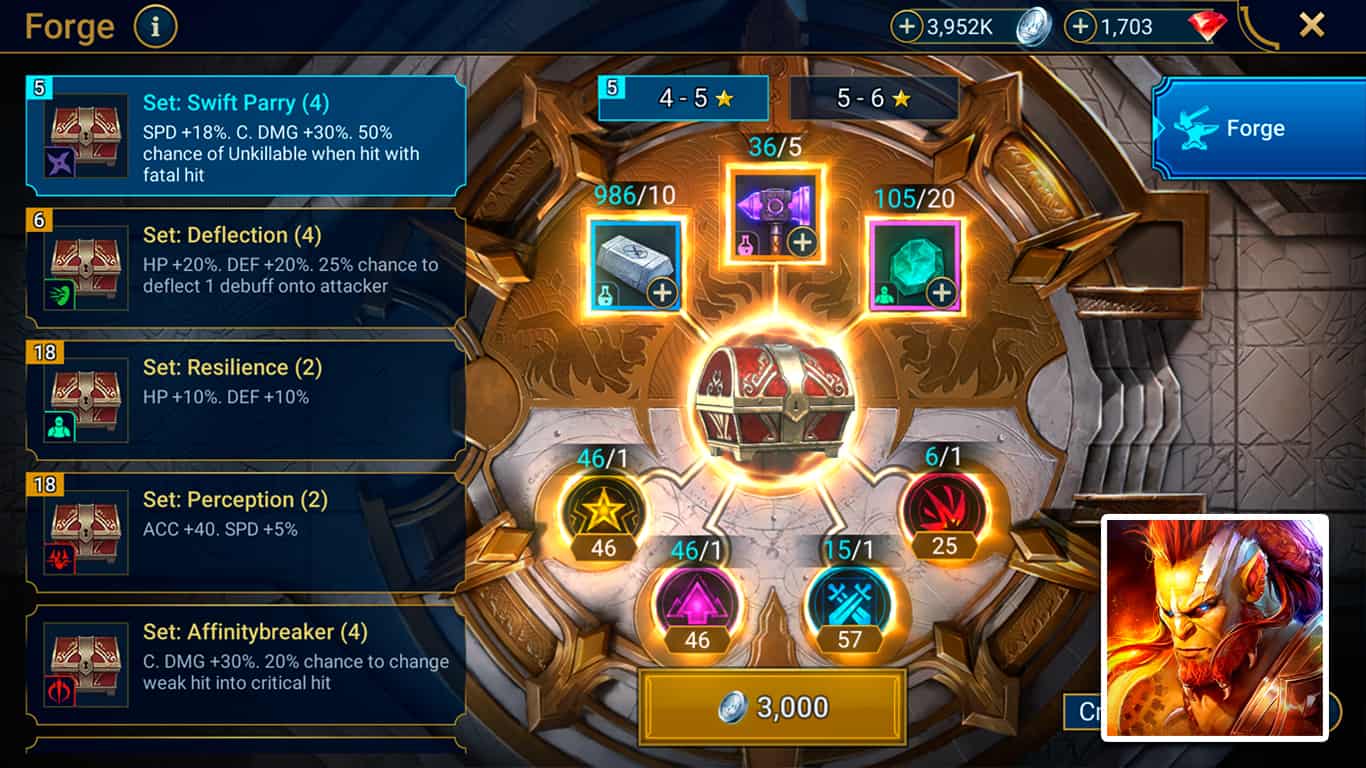 The Forge in RAID: Shadow Legends is where you can craft artifacts not obtainable anywhere else in the game.

Many of the sets that you can craft in the Forge are not worth using, but some of them are among the best artifacts in the game.

When you open the Forge for the first time, it can seem confusing with all the material and charm slots, sets you can craft, and options you can choose.

Crafting artifacts in the Forge costs both materials and silver. The higher the potential stars on the set you craft, the higher the cost.

In this guide, we cover everything that you need to know about the Forge in RAID: Shadow Legends, from how to use it to how you can increase your chances of getting specific types of artifacts and the right stats.

What is the Forge?

The Forge is a building in RAID: Shadow Legends where you can craft various artifacts. It is located in the middle of the Bastion.

Players unlock the Forge when they reach account level 30.

Artifacts that can be crafted in the Forge cannot be obtained in other ways than from the Forge.

Crafting artifacts in the Forge cost both materials and silver.

Players can tweak the chances of getting specific types of artifacts and substats using charms.

Later on in the game, the Forge becomes an important building when gearing up your champions, as some of the strongest artifact sets come from the Forge.

How to craft artifacts in the Forge

To craft artifacts in the Forge, gather the required materials, go to the Forge in the Bastion, select the artifact set you wish to craft, select the number of potential stars and click the yellow button showing an amount of silver at the bottom.

Upon clicking to craft an artifact, you will receive one of the six types of artifacts of the set that you chose.

What type of artifact you’ll get, how many stars it’ll have, its rarity, and what stats it has is chosen at random. You can see the probabilities of getting the different number of stars and rarities later in this guide.

You can see all the different sets of artifacts that you can craft in the Forge on the left side, as well as what boosts each set gives.

Once you’ve selected the set that you wish to craft, you can set the number of stars at the top of the forging window.

Setting an artifact to be 4-5 stars, for instance, means that the artifact will have either 4 or 5 stars when crafted.

The higher the number of stars you choose, the more materials it’ll cost to craft that item.

The icons displayed over the artifact chest are the materials that you need to craft an artifact of the chosen set at the selected number of stars.

The icons displayed under the artifact chest are charms that increase the chances of your artifact being more powerful or of a specific type.

It is not required to use charms when crafting artifacts. They just give you better odds of getting a great artifact. Only the shown material cost is required as well as the silver cost.

There is no limit to how many artifacts you can craft in the Forge as long as you have the required materials and resources.

When you unlock the Forge at level 30, you might be overwhelmed by the sheer number of artifact sets that you can craft.

Here is a complete overview of the different artifact sets that you can craft in the Forge in RAID: Shadow Legends:

Many of the sets that you can craft in the Forge are not among the best in the game. However, some of them can be great alternatives to the gear that you have from the campaign.

Swift Parry is an exception to this, as it is one of the best artifact sets in the game. Perception is also an excellent artifact set.

When you’re crafting artifacts in the Forge, you can use charms to increase your chances of getting a specific type of artifact, better substats, the highest rank, and higher rarity.

You can add charms to your artifact by clicking any of the icons below the artifact chest in the Forge and then selecting the charms on the left side.

Here are all the different types of charms you can get and use in the Forge in RAID: Shadow Legends:

Rank Charms double the chance of the artifact being of the highest rank, the highest number of stars, within the range that you have selected.

If you choose the artifact to be between 3 and 4 stars, it has a 40% chance to have 4 stars upon being crafted.

With a Rank Charm selected, that same artifact would have an 80% chance to have 4 stars upon being crafted.

Rarity Charms double the chance of the artifact being of a higher rarity.

Without a Rank Charm, an artifact has a 7.5% chance to be of legendary rarity when crafted, but with a Rank Charm activated, it has a 15% chance instead.

Type Charms double the chance of the artifact being of the type corresponding to the charm that you selected.

For instance, there is a 16.67% chance that an artifact will be a weapon when you craft in the Forge. With a Weapon Charm activated, that artifact would have a 33.33% chance to be a weapon upon being crafted.

Normally there is a 10-12.5% chance of a specific substat being rolled per substat line, depending on the artifact type. With a Speed Charm, for example, the crafted artifact has a 50% chance of having +SPD as one of their substat lines.

When you’re using the Forge to craft artifacts that you’re planning to use, we highly recommend that you use charms to increase your chances of getting the best gear.

Using charms is also a great way to get more out of your crafting materials, as you’ll, on average, have to spend less material to get the artifacts that you want.

How to get materials and charms

You need materials to craft artifacts in the Forge, and we recommend that you also use charms, though charms aren’t required like the materials are.

You get materials for crafting in RAID: Shadow Legends by fighting in the Arena, from the clan shop, events, tournaments, Faction Wars, and Doom Tower.

Charms can be obtained from the Bazaar, advanced quests, the clan shop, the free daily pack, events, tournaments, and Doom Tower.

At the beginning of the game, you probably won’t be using the Forge that much.

However, at some point, chances are that you’ll want to start crafting Swift Parry artifacts, in which case you want to have both materials and charms ready.

So, even though it might seem like you don’t really need them, it’s a great idea to start gathering the various materials and charms early on for your progression later in the game.

When crafting artifacts in the Forge, there are a lot of different elements and stats being rolled into a final piece of artifact.

In the following charts, you’ll get a complete overview of the probabilities of getting specific ranks, rarities, types, main stats, and substats on artifacts that you craft, including when you use charms to boost your chances.

*Only one type of artifact can have its chance increased at a time. For example, if you choose to use a Helmet Type Charm, you’ll have a 33.33% chance to get a Helmet. The remaining five artifacts will each have a 13.33% chance to be crafted, as the total chance needs to be 100%.

There are no charms that affect the chance to get specific main stats on artifacts.

The types of artifacts with a 100% chance listed above can only get one stat as their main stat.

The types of artifacts with a chance lower than 100% can have various stats as their main stat, each of which has an equal chance to be rolled – the chance in the table.

Check out our artifacts guide to see the different main stats each type of artifact can have in the game.

*All of the potential main stats on chestplates, gauntlets, and boots can be rolled on their substat lines as well. However, as you cannot have the same exact stat line twice on an item, there is technically one less potential substat to roll on each substat line after the main stat has been determined. Furthermore, when one substat line is rolled, there is one less substat included in the pool of substats to roll on the next line, causing the chance of each substat that is left to be rolled to increase a bit.

*The probability of rolling a specific substat on a line among the various substats that a specific type of artifact can have is equal. Check what substats and main stats artifacts can have here.

*As you cannot roll the substat corresponding to the chosen Substat Charm, the probability of rolling the remaining substats and potentially main stats, depending on the artifact type, is increased.

That’s everything you need to know about the Forge and how to craft artifacts in RAID: Shadow Legends!