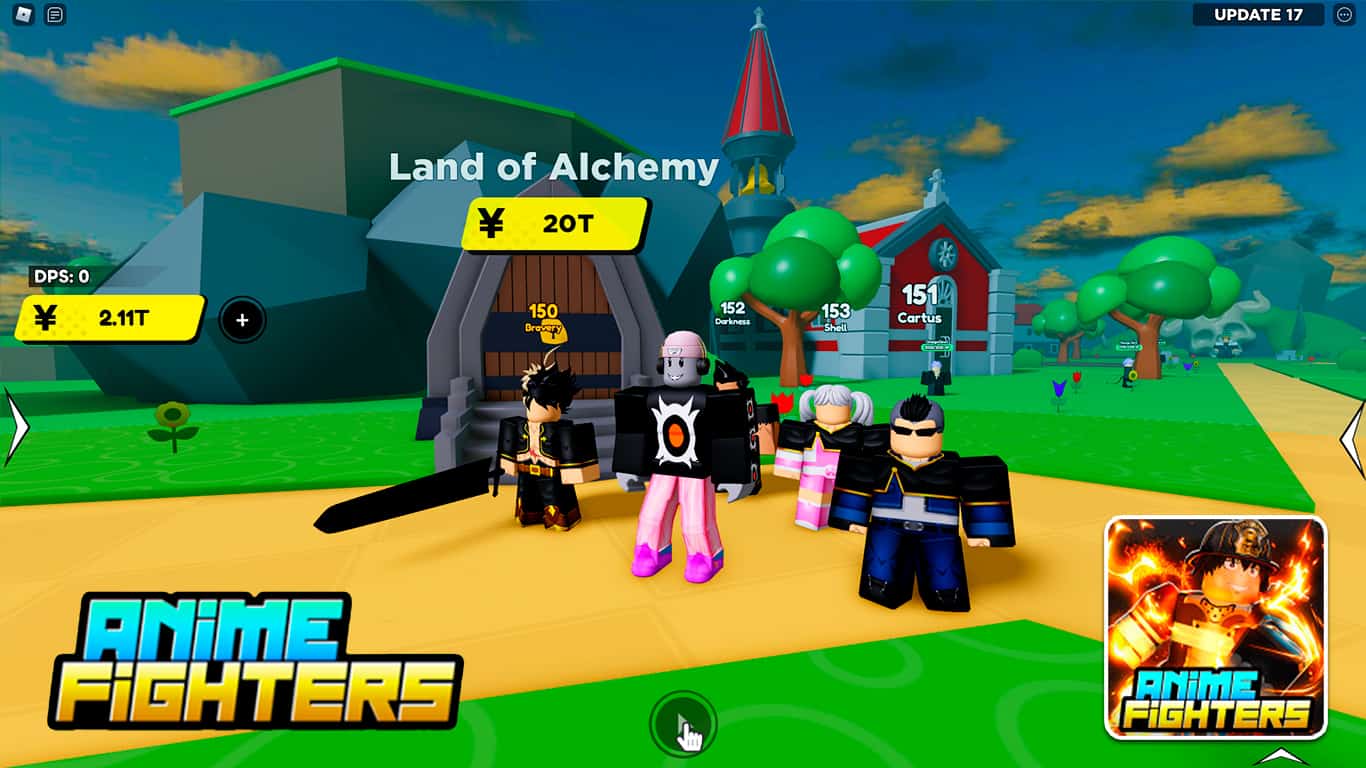 The main objective of Anime Fighters Simulator is to progress through the worlds and become stronger by obtaining characters and upgrading them.

Because of this, players want to quickly progress through the game and make it to the last world so they can get their hands on the strongest fighters.

Even though the game is simple and easy to get into, there are some strategies that you should follow if you wish to progress through the game fast. In this guide, we’ll give you all of them!

How to progress fast

But even though the basics are simple, you can significantly speed up the rate at which you progress through the game by using the right strategy.

To progress fast in Anime Fighters Simulator, you want to prioritize your resources, and more specifically, your Yen.

Early on in the game, when you are still progressing through worlds, Yen is the single most important resource and is what determines how quickly you can progress. Late-game, other resources like shards become very important as well.

If you’ve yet to reach the last world in the game, you shouldn’t spend a lot of Yen on trying to get fighters of legendary or higher rarity.

Instead, you should only open around 50 stars whenever you reach a new world, as it should give you a full team of fighters from that world of rare rarity.

If you get lucky and get one or multiple epic or higher-rarity fighters, then that’s only great.

Once you have a full team of fighters from the new world, your total damage output will increase significantly from what it was in the previous world.

At this point, you want to start saving up Yen to get to the next world, not to open more stars in your current world.

You’ll get much more out of your Yen in terms of damage upgrade if you go to the next world and get fighters from that instead of trying to get better fighters from your current one. The reason why is that both the base level and DMG per level of fighters from later worlds are much higher than that of fighters from previous worlds.

If you have a character of legendary or higher rarity from an earlier world that scales better than the rares or epics from the world you’ve just made it to, then you should fuse all common and leftover rares and epics into that one.

That character will, in many cases, be stronger than one of the characters that you’ve gotten from the new world, and then you should, of course, still use it on your team.

The expected damage increase that you get from opening more stars in the same world quickly diminishes, though, as XP requirements to level up fighters quickly rise. Therefore, you shouldn’t keep on opening stars to upgrade a high-rarity fighter from an earlier world. Just save up Yen and get to the next world as soon as possible.

While you are saving up Yen to get to the next world, there are a couple of different things that you should do in the game to push your progress further. All of these are covered in later parts of this guide.

How quickly you can get Yen is the main factor in how fast you can progress in Anime Fighters Simulator.

As outlined in the previous paragraph of this guide, you want to spend most of your time saving up Yen to unlock the next world.

There are different ways to get Yen in the game, but the fastest is by doing the time trial. You can learn more in our guide on how to get Yen fast.

To maximize the Yen that you get per hour, you should do the time trial every hour and every hour and a half when you are actively playing the game. Doing this ensures you the fastest rate of progress.

When you aren’t doing the time trial, you can do other activities in the game like completing quests or farming bosses.

If you’re looking to take your Anime Fighters Simulator progression to the next level, then you should be farming Yen even when you aren’t playing.

You can farm Yen in the game while you are AFK with programs like TinyTask. Learn more in our AFK farming guide.

AFK farming is when you record the sequence of you defeating a boss in the game with an automation program and then replay that sequence over and over, making you automatically farm the same boss over and over.

There are many upgrades for you to unlock in Anime Fighters Simulator that give you permanent boosts that will help you progress faster.

Most of the upgrades you can only unlock yourself, but there are quite a few that you can unlock without doing much yourself.

Specifically, the Extra Equip and Extra Star upgrades. These upgrades are unlocked upon you reaching certain rooms in the time trial.

The good thing for you is that you don’t have to reach those rooms in the time trial by yourself.

If you do the time trial with other players that are much stronger than you, all you have to do is follow them while they clear the rooms, and you’ll get the upgrades when you reach the rooms required for each upgrade.

As the time trial is shared across the whole server, there is a good chance that someone else is also doing it when you go there when it starts.

The Extra Equip upgrade, on the other hand, is extremely useful for your progress in the game, as it allows you to equip one more fighter on your team, which is a major damage boost.

You unlock the Extra Equip upgrades by reaching the following rooms in the time trial:

If no strong players do the time trial on your server when you do it, you can check out Anime Fighters Simulator livestreams on YouTube. They often do time trial carries for viewers.

Increasing your Yen multiplier is very important when you are looking to progress fast in Anime Fighters Simulator.

To increase your multiplier, you need to collect world badges. Each world badge gives you a 10% Yen multiplier boost.

You get the badge of a world by completing all the quests within it. The last quest in each world gives both a mount and that world’s badge.

Remember to claim the 10% Yen multiplier bonus in the upgrades menu when you’ve acquired a new badge.

You can access the upgrades menu by clicking the up-arrow icon on the right side of the screen.

As enemies from later worlds give more Yen per health, it’s actually best not to try to complete all quests before you move on to the next world.

In most cases, you will have quests leftover from your current world and perhaps also previous ones at the time that you can unlock the next one.

Don’t stick around in the previous worlds just to complete quests, just move on to the next world and get your damage up.

Later, when you’ve increased the damage of your team, you can go back to earlier worlds and quickly complete the remaining quests to get the badge.

While we were progressing through the game, it would at one point take us more than 6 hours to complete the last quest in 9 Crimes Island. At that point, we’d already unlocked Lucky Kingdom, which is two worlds after 9 Crimes Island.

In such a case, it’s not worth your time to complete the last quest for a 10% Yen boost. You should farm enemies that give more Yen per health instead and do the quest later when you are stronger.

There are always events running in Anime Fighters Simulator on weekends, and sometimes also during the week.

You should take advantage of events, as they can help you progress much faster.

Usually, two events are running at the same time on weekends, with 2x Yen being one of them and the other one being either +2 Luck or 2x XP.

Given that Yen is the most important resource for your progress throughout most of the game, it’s no surprise that the 2x Yen boost will be of great help.

Extra luck and 2x XP are also very useful, as they’ll help you acquire better fighters and upgrade your main ones faster.

You can see whether or not an event is running both on the Anime Fighters Simulator page on Roblox or in the game.

The current event boosts will be displayed in the game title on the game page and in the stats window in the bottom-right corner inside the game.

How to level up fighters quickly

Leveling up your fighters increases their damage and thus allows you to progress faster.

However, as covered earlier in this guide, if your goal is to progress fast, you should generally aim to get new fighters from later worlds that are already higher level than your current fighters rather than upgrading.

There are situations, though, where leveling up your fighters makes sense. For example, if you’ve acquired a character of mythical rarity or higher.

If you haven’t reached the last world, the fastest way to level up a fighter in Anime Fighters Simulator is to progress to the next world and use fighters from that world’s star for fusion.

We do, of course, recommend that you keep fighters that are stronger than your current ones for your team and only use the ones that you don’t need for fusion.

After reaching the last world, it will start being extremely difficult to level up fighters through star opening and fusion. At that point, it might take more than a day’s worth of gameplay to just level up once.

When this happens, you want to start using the incubator to level up your strongest fighters. A fighter gains one level per day that it is locked in the incubator.

Other things you can do to level up fighters faster include using farming Yen so you can open more stars and using XP boosts when fusing.

That’s how to progress and level up characters fast in Anime Fighters Simulator!