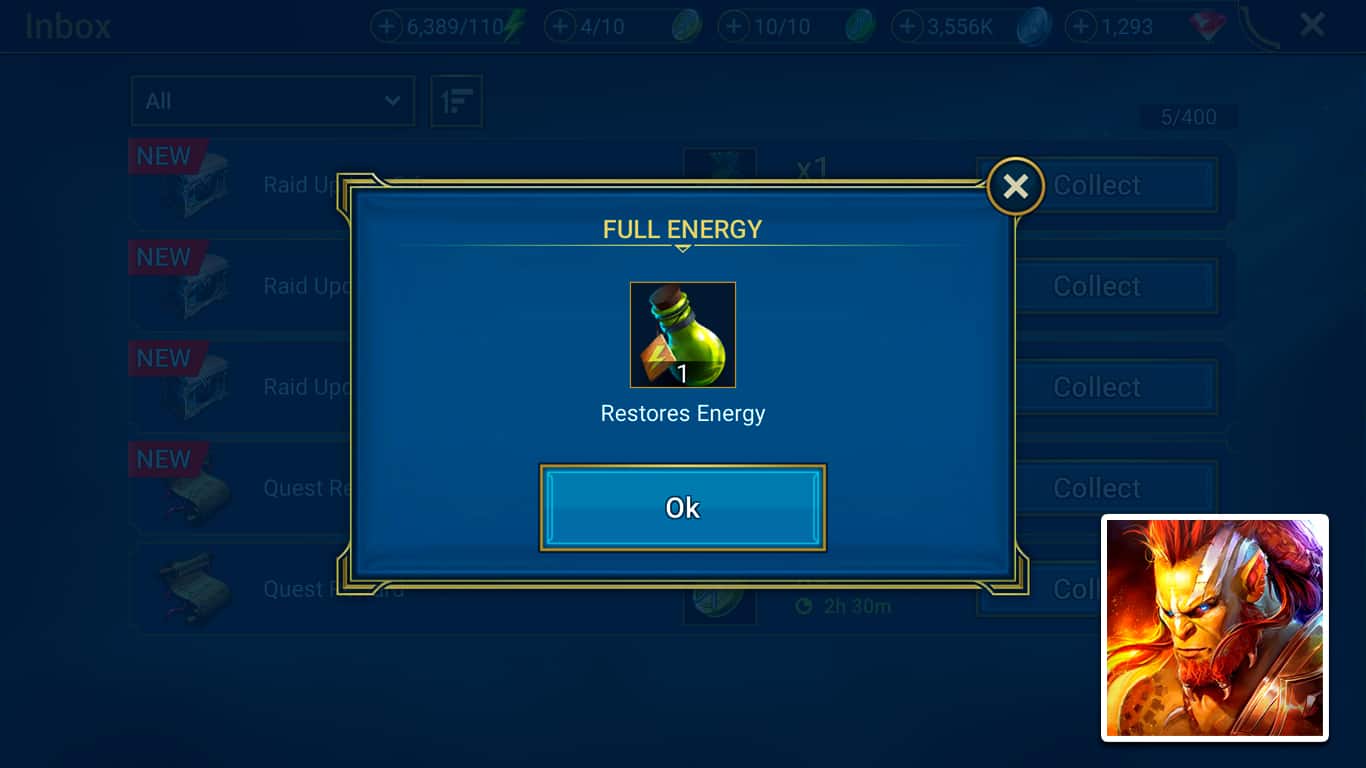 Energy is the single-most-important resource in RAID: Shadow Legends, as you cannot battle in the campaign or in any dungeon without it.

As energy is needed to fight in both the campaign and in dungeons, energy is the resource you need to farm both silver, mastery scrolls, potions, and artifacts, all of which are extremely important to making champions stronger.

Spending energy as efficiently as possible is a difficult task, as there are many factors that should be considered when planning how to spend energy.

Recommended Read: How to Get Legendary Champions in RAID: Shadow Legends

In this guide, we give you all the information you need on energy in RAID: Shadow Legends, from how to get it to the best way to use it.

Energy is the resource that you need in RAID: Shadow Legends to do most of the content.

If you don’t have any energy left, you cannot start battles in the campaign or in any dungeons, which are two of the largest parts of the game.

The energy resource limits the player from running an infinite number of battles, consequently making energy the most important resource.

Because energy is limited and needed to run battles, it is seen directly as a resource you can trade for the items you can farm in the campaign and in dungeons – silver, artifacts, mastery scrolls, and potions.

You can see how much energy you currently have at the top of the screen inside the game.

It is possible to have more energy than your maximum cap, but when you have more, you don’t regenerate energy like you do when you are below your cap.

How to get energy in RAID: Shadow Legends

There are many ways to get energy in the game, some of which you can actively do and some you can claim from time to time.

Here is a complete list of every single way to get energy in RAID: Shadow Legends:

Missions are a series of tasks that you can access at the bottom of the screen. Some of the missions give energy as a reward upon completion.

There are four types of quests in the game – daily, weekly, monthly, and advanced. Several of the quests that you can do give energy as a reward, including the daily quest ‘Fight in Classic Arena 5 times’, which gives a full energy refill.

Every time you level up in RAID: Shadow Legends, you get energy equal to your current maximum cap as a reward. Check out our guide on how to level up your account quickly here.

Some of the chests in the game, like the raid activity chest, can give energy as a reward.

Upon having had the game open for 60 minutes, you can claim a full energy refill from the playtime rewards system, which resets daily. You can access it through the hourglass in the bottom-right corner above the BATTLE button.

In the Bazaar located in the Tag Team Arena, you can purchase 300 energy for 1,000 Gold Bars.

Some of the floors in the Doom Tower give energy as a reward. The first floor to give energy is floor 10.

The daily login rewards system gives useful items daily, and some days that reward is energy.

There is almost always at least one event running in RAID: Shadow Legends, and very often, energy is one of the rewards that you can earn from participating.

Like events, tournaments are almost always running the game as well, and in tournaments, you’ll often find energy as part of the rewards pool too.

There are many packs to purchase in RAID: Shadow Legends if you wish to spend money, many of which contain energy. But there are also free packs to claim every day, and these often contain a full energy refill.

Lastly, you can purchase a full energy refill in the Shop with 40 gems. Buying full energy refills is a great way to spend your gems in RAID: Shadow Legends if you already have the Gem Mine fully unlocked and more slots in the market.

The best way to spend energy in RAID: Shadow Legends so that you’re efficient with the precious resources is not always an easy task.

Sometimes, however, the best way to spend your energy in RAID: Shadow Legends is to hold onto it until an important event or tournament comes out so that you can make sure to get all the rewards from it that you need.

In such a case, you would want to have way more energy stored up than your maximum cap, even though it means that you won’t be regenerating more energy passively.

Which of the two approaches you should go for is the difficult balance of trying to spend energy wisely in the game.

As a rule of thumb, we recommend not trying to save up a bunch of energy early on in the game, as it’s easier to get more energy at this point than it is late-game.

Late-game when upgrading your champions is your main focus, it is often a great idea to hold onto energy for a couple of days if you see an important event or tournament coming up that gives rewards that you need to increase the power of your team.

Another general tip when it comes to spending your energy is to try and accomplish multiple objectives at the same time.

For example, if you need to farm the Arcane Keep for potions to ascend champions, try to combine it with leveling up fodder champions at the same time, making more of your energy.

If you can time the XP boosts that you get from weekly and advanced quests with events so that you both farm potions, event points, and champion XP with an XP boost active, then you’re looking at a very efficient energy spending setup.

It is, however, difficult to time everything every time you spend energy, but trying to get more out of your energy can help you progress faster in the game.

What is the maximum energy cap?

The maximum energy cap in RAID: Shadow Legends is 130, which you get at level 60.

Even though the maximum level in the game is now 100, you do not get a higher energy cap after level 60.

Having a higher energy cap is great, as you’ll not only be able to regenerate more energy passively, but you’ll also get more energy from full energy refills.

How quickly do you regenerate energy?

Whenever you have less energy than your maximum energy cap in RAID: Shadow Legends, you regenerate 1 energy every 3 minutes passively.

At the maximum energy cap of 130, which is unlocked at level 60, it takes 6.5 hours to fully replenish your energy to the cap if you have 0 energy left.

Once you hit the maximum energy cap, you stop regenerating energy until you’re below the cap again.

How to increase energy limit

You can increase your maximum energy limit in RAID: Shadow Legends by leveling up your account.

The closer you are to level 60, the less your energy limit will increase with each new level up.

In other words, your energy limit increases by more per level up at the beginning of your journey than when you’re closer to level 60.

That’s everything you need to know about energy in RAID: Shadow Legends!