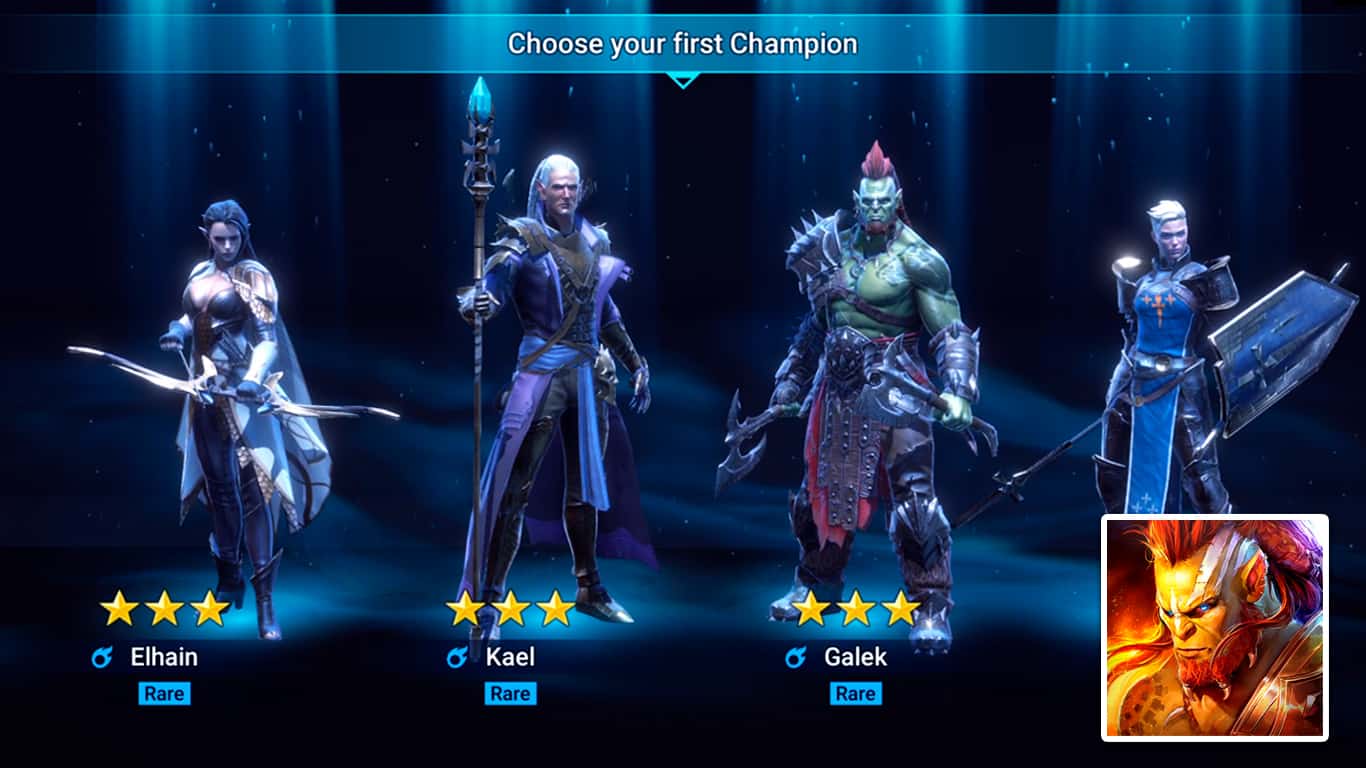 At the beginning of RAID: Shadow Legends, you get to choose a starter champion between four, Elhain, Kael, Galek, and Athel.

If you haven’t played the game before or just aren’t familiar with the champions, you might wonder what champion you should pick.

The best starter champion in RAID: Shadow Legends is Kael, as he deals incredible AoE damage, which is very useful when progressing through the game. Additionally, he is also strong against bosses – more information below.

Your starter champion choice in RAID: Shadow Legends is important, but it’s not a disaster if you don’t pick the best one.

All of them are strong and useful for quite a while.

Two of the champions, however, are both strong in the beginning but also later on in the game.

We believe that the best starter champion in RAID: Shadow Legends is Kael.

He is the strongest champion of the starters for a very long time, as he both boasts incredible AoE damage, powerful debuffs, high stats, and a great ability against bosses.

In the end game of RAID: Shadow Legends, Athel can be stronger than Kael in some situations, including against some bosses, which is why we believe Athel is the second-best starter champion.

We recommend checking out our RAID: Shadow Legends Tier List to get a better idea of how these two champions and all others in the game perform relative to each other.

Common for all the starter champions is that they all have a powerful AoE ability that damages all enemies at once, which will help you a lot when progressing through the game.

This means that no matter what you choose, you’re certain that you’ll have a powerful champion that can carry your team through stages for a while.

Therefore, we recommend that you put your starter champion on your team and upgrade him/her throughout the beginning of the game.

If you’ve picked either Kael or Athel, then you can easily use them on your team late-game.

Elhain and Galek will probably be replaced quicker than the other two champions.

Even if you end up or already have picked either Elhain or Galek, it most likely won’t be worth it to start over just to pick another starter champion, as you can pull all starter champions from shards.

In the following, we go over what each of the starter champions is good at, as well as what their skills, affinity, and faction are.

Kael is an attacker who belongs to the Dark Elves faction and carries the magic affinity, which means he deals extra damage to those with the spirit affinity.

Given his skillset, Kael thrives at AoE damage output while dishing out powerful debuffs at enemies.

His buff, Aura, gives a significant boost to the health of his allies.

All other starter champions do, however, also possess this skill.

Kael is strong against certain bosses that could prove troublesome later on in the game.

All in all, Kael is a powerful, well-rounded attacker who excels at AoE and bossing.

Athel is an attacker who belongs to the faction, The Sacred Order, and carries the magic affinity, which means she deals extra damage to those with the spirit affinity.

Athel deals a lot of damage and can place powerful debuffs on her enemies and buff herself.

Elhain is of the High Elves faction, is an attacker, and carries the magic affinity, which makes her deal more damage to champions carrying the spirit affinity.

Like Kael, Elhain focuses on AoE damage output but does fall short of the amount of damage Kael can dish out.

Elhain doesn’t possess any abilities that help the rest of the team except Aura, which all other starters also possess.

Galek is an attacker who belongs to the Orcs faction and carries the magic affinity, which means he deals extra damage to champions carrying the spirit affinity.

Galek is a fighter with both great AoE and single target damage.

Galek can’t, however, keep up with the other starter champions in terms of usability and will most likely be replaced on your team quicker than Kael and Athel.

He does possess some great debuffs, but one is contingent on having many debuffs on your team already.

That’s everything you need to know about what the best starter champion in RAID: Shadow Legends is!