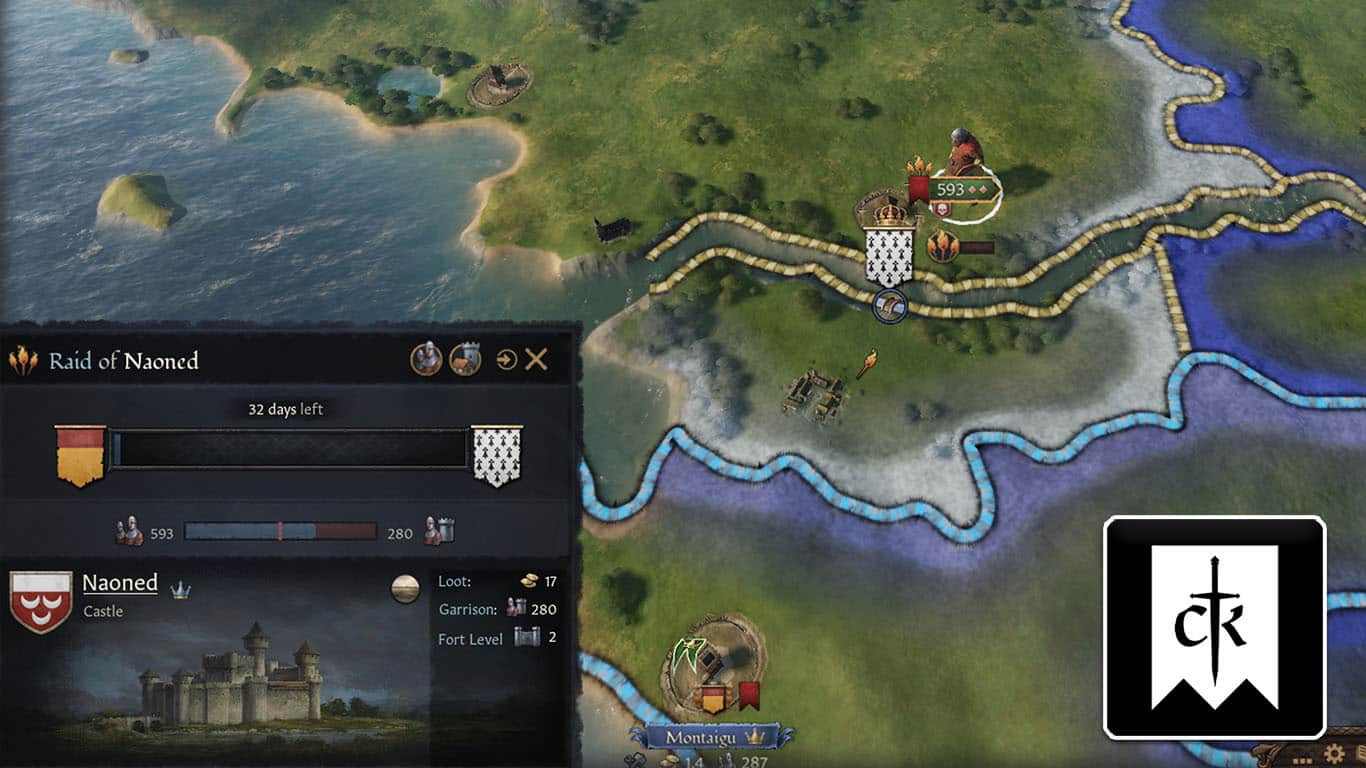 One of the best ways to make money in Crusader Kings 3 (CK3) is raiding! Going into your neighbors’ lands and stealing what you see fit will make you a lot of enemies but also a lot of Gold!

Raiding is a mechanic that mostly tribal rulers use to help them, with rock bottom economies, to get some money in that treasury.

Though it is mainly used by tribal rulers, some feudal and clan lords can also use this amazing mechanic to get a quick influx of money to construct something new.

So, to make sure that you can always get your hands on some Gold, here is a detailed raiding guide for Crusader Kings 3, where we will tell you how you can raid efficiently and how you can also do it as a feudal or clan ruler.

What are Raids in CK3?

Raids in CK3 are the way rulers can attack the holdings of their neighbors without declaring war.

Doing this will give them a chance to get all the loot in the county they have raided, along with the possibility of getting captives, which they can ransom later.

Once you have raided a county, you won’t be able to loot it again until 5 years have passed, during which the county will suffer from a lot of economic debuffs.

This is why you should always destroy raiders that come into your territories, as they can severely impact your economy.

Players will always get a notification when a raider has entered their lands, and all you can do is raise your levies and fight them before they take everything in the county they are sieging.

Though you are not at war, you can always follow their armies and destroy them, to make sure they don’t come back.

Likewise, if you want to raid a powerful country, make sure you can get away before their armies get there, since you can’t leave a sieged county while raiding until the siege is done.

The person that you raid will get a -15 opinion modifier against you, but it will slowly disappear in time.

How to Raid in CK3

To start a raid, you need to open the Military tab in the top right corner of the screen and select the “Raise All as Raiders” option at the top of the menu.

You will now have to wait for your troops to mobilize, as they would for a normal war. Select the troops and move your mouse over the provinces you would be interested in raiding.

You will see the amount of loot you can get from each province. Depending on which culture or religion you have, you can either only raid neighbors or anyone.

Players will have to pay attention to the red skull that can appear after sending your troops to raid, which will cause giant casualties due to attrition.

It would be better to always attack provinces that are close by or that are coastal, if you are a Viking.

If your army is selected, you can see the amount of Gold your troops can hold from the raids. The more troops you have, the more Gold you can carry back home.

To get the Gold into your treasury, all you have to do is send the army back home. Once it enters your realm, you will instantly gain the Gold and, usually, an equivalent amount in Prestige.

If you are part of the Norse culture, you can also embark on raids anywhere in the world. You can send your raiders anywhere by just clicking to send them overseas.

Attacking faraway kingdoms is amazing for Vikings since you can attack weak counts and dukes all over Europe.

How to Raid as a Feudal or Clan Ruler in CK3

This might be the part most of you have been waiting for. Yes, you can raid as a feudal or clan lord in CK3.

To do it, you just need to meet one of these three requirements:

A nice way to have access to raiding while being feudal in CK3 is to follow an Unreformed Pagan Faith. This will allow you to have the best of both worlds: raiding and a lot of Gold from cities.

You can easily change your Faith at any time, which will allow you, as any ruler in the world, to have access to raiding.

However, Unreformed Pagan Faiths don’t have access to Heads of Faith and Holy Wars. If you just want to use raiding at the start of the game and then improve, you can use this strategy.

A fun way to get access to raiding, which will require a lot of Prestige, though, is to diverge your culture and add the Practiced Pirates tradition to your culture.

The Practiced Pirates cultural tradition is available in the Social traditions category and can be selected if your culture has more than 50% coastal provinces.

However, the problem with this tradition is that it changes a main advantage of raiding: gaining Prestige.

By unlocking the Practiced Pirates cultural tradition, players will gain the ability to raid but will lose 1.5 Prestige per 1 Gold they get from raiding.

Though this can sound pretty bad, we all know that feudal rulers make a lot of passive Prestige and won’t suffer horrible side effects from this debuff.

This one is a little bit different, as it isn’t possible for most players. You can get a special modifier that will allow you to raid for 100 years, even if you are feudal if you “Elevate the Kingdom of Mann & the Isles”.

This is a decision available to the duke and count of the Isle of Mann if they have the Living Legend level of Fame and are a Viking.

This is a really interesting decision that will instantly change your government to feudal and will also allow you to raid for an extra 100 years.

However, this is obviously useful only for players that are fighting and conquering in the British Isles. If you do want to go for this decision, make sure you don’t get a King title before doing this.

Your best bet would be to play as the Ivaring dynasty and get this fast by raiding until you get the Living Legend Fame level.

How to Raid for Captives in CK3

If you want to make sure you also get some captives and prisoners from raiding in CK3, you have to prepare your target carefully.

The best thing you can do is attack the capitals of lords since this will allow you to get their families and courtiers as prisoners.

If you are attacking a duke, you can always also attack its counts’ capitals. The same goes for kings. Raiding the capitals of any kind of ruler will have an increased chance of getting captives.

That’s everything you need to know about raiding in Crusader Kings 3!

Crusader Kings 3 – How to Change Your Character Religion