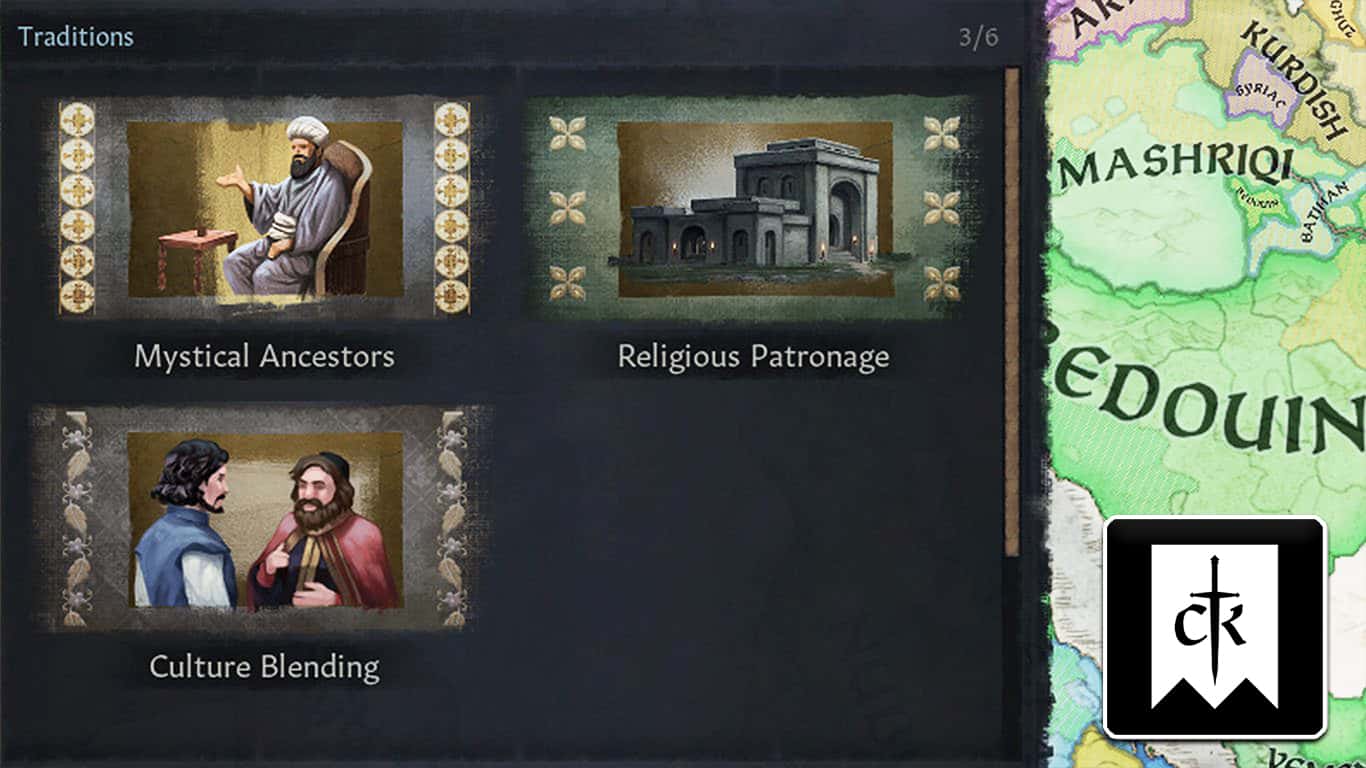 There are many cultures and traditions in Crusader Kings 3 that can change a whole playthrough instantly.

With some incredible bonuses, culture traditions are extremely important, and there are many players that don’t even think about them.

Recommended Read: How to Create a Hybrid Culture in CK3

With the ability to improve and change your culture at any time, you should always know which traditions are the best.

So, to help you build an incredible kingdom, here are the best culture traditions in Crusader Kings 3.

There are five main categories when choosing which culture traditions you want to implement in CK3:

All of them have some amazing bonuses, and you will most likely need to get at least one from each category.

So, here are the best culture traditions in CK3, for each category:

The Legalistic Realm culture tradition is extremely useful if you are planning on keeping your kingdom together and vassals under control.

The biggest reason why Legalistic is really good is the increased chance of getting the Just trait. With +2 Stewardship, +1 Learning, and +5 Vassal Opinion, the Just trait is incredibly useful for a good ruler.

Another addition to the Legalistic culture tradition in CK3 is the acceptance rate of rightful imprisonment.

As long as you have a “real” reason to imprison a vassal, you will have a much higher chance than in the past for them to accept your decision.

Your vassal limit will also increase by 30, which is almost as much as a king gets (40 vassal limit), and title creation will cost 30% less.

The only problem one might have with the Legalistic culture tradition is a debuff for Dread. You will lower your monthly Prestige gain by 1% for every point you have in Dread.

This can be extremely bad for a Martial or Intrigue ruler that has a lot of scary traits.

In an opposite direction from Legalistic, we have the Coastal Warriors culture tradition. Though this one is only available to cultures of North Germanic heritage, it is extremely good.

It gets the best traits from a culture tradition such as Warrior Culture and makes it a lot better.

The Strong and Hale traits will grant you Prestige, and you will have a higher chance of having children with the Strong trait.

They will gain a +1% chance of getting it based on the amount of prowess they are born with. For every 5 prowess, you will get +1%.

Players will also have access to some really good men-at-arms that will dominate the early and mid-game.

The Longbow Competitions culture tradition in CK3 is only available to cultures that have Brythonic, Goidelic, and West Germanic heritage.

This tradition will give you access to the best men-at-arms in CK3, the longbowmen. These archers will constantly evolve as time passes and have a huge advantage over skirmishers and heavy cavalry.

You will also have the ability to form a larger regiment of archers. However, you will have smaller regiments of heavy cavalry and spearmen.

The Strength in Numbers culture tradition will allow you to build the largest army in CK3. Not only does it work incredibly well with Longbow Competitions, but it is also really good on its own.

Strength in Numbers will increase your levy size by 15% and it will lower the cost of archers, light cavalry, and skirmishers by 15%.

The max amount of archer, light cavalry, and skirmisher regiments will also increase by 2. This means that if you have the Longbow Competitions tradition, you can have +4 archer regiments.

The real problem with Strength in Numbers is the -2 Knights debuff. Knights have the ability to fight as well as thousands of levies, so that will be a heavy blow to your power.

However, if you get Household Guard Gallant perk you can increase your Knights by 4, offsetting the problem from this tradition.

The Practiced Pirates tradition will allow you to raid even if you aren’t tribal or a heathen anymore. You also have a larger amount of loot capacity (+25%).

One disadvantage you will get from this tradition is that it changes raiding a bit. You will now lose 1.5 Prestige per loot you bring home.

However, if you have already played for a bit and have become Feudal, you probably make more than enough Prestige passively.

The Right to Prove

The Right to Prove tradition will allow women in your country to become Shieldmaidens.

The Shieldmaiden trait is extremely good, and allowing women to fight as knights will also increase your power by a lot.

This tradition will also increase the effectiveness of your knights by 25%. However, your Knight limit will be lowered by 2.

Loyal Subjects will make your life as a ruler a lot easier. This tradition will make the Loyal trait more common, which means that more vassals will actually stop opposing you.

The only downside to this is that factions won’t be separated by faith or culture. This means that you can have incredibly powerful factions that can rise against you if you aren’t careful.

The By the Sword culture tradition is the most aggressive one in all of CK3. This tradition will allow you to use as many Kingdom level Holy Wars as you want, which are normally limited to one.

This will allow you to conquer the whole world in just a few years if you are extremely motivated. Also, all casus bellis that require Levels of Devotion to use will require one less Level of Devotion.

Your monthly Piety gain will also decrease by 20%, and the Different Faith modifier will be even worse, with an additional -20.

This is a tricky tradition, as you can only gain it through hybridization. You will have to find a culture that has it and create a hybrid culture with them to get it.

The Mystical Ancestors tradition will allow you to gain thousands in Renown by just giving your family members titles.

The Dynasty Opinion will also increase by 10. The only problem is that you will lose piety for revoking the titles of close family members.

You also can’t use the Disinherit action available to Dynastic Heads.

Lords of the Elephant

Elephants are the most powerful men-at-arms in CK3. So, getting a tradition that makes them more powerful and cheaper has to be one of the best in the game.

The Lords of the Elephant tradition will increase the damage and toughness of your elephant cavalry by 10%, and it will lower the maintenance and recruitment cost by 15%.

If your ruler has the maximum level in their Education Trait, the elephant cavalry will receive more bonuses, such as:

That’s everything you need to know about the best culture traditions in Crusader Kings 3!

Crusader Kings 3 – What Happens When You Die

Crusader Kings 3 – How to Change Culture

Crusader Kings 3 – What Does Ironman Mode Do?