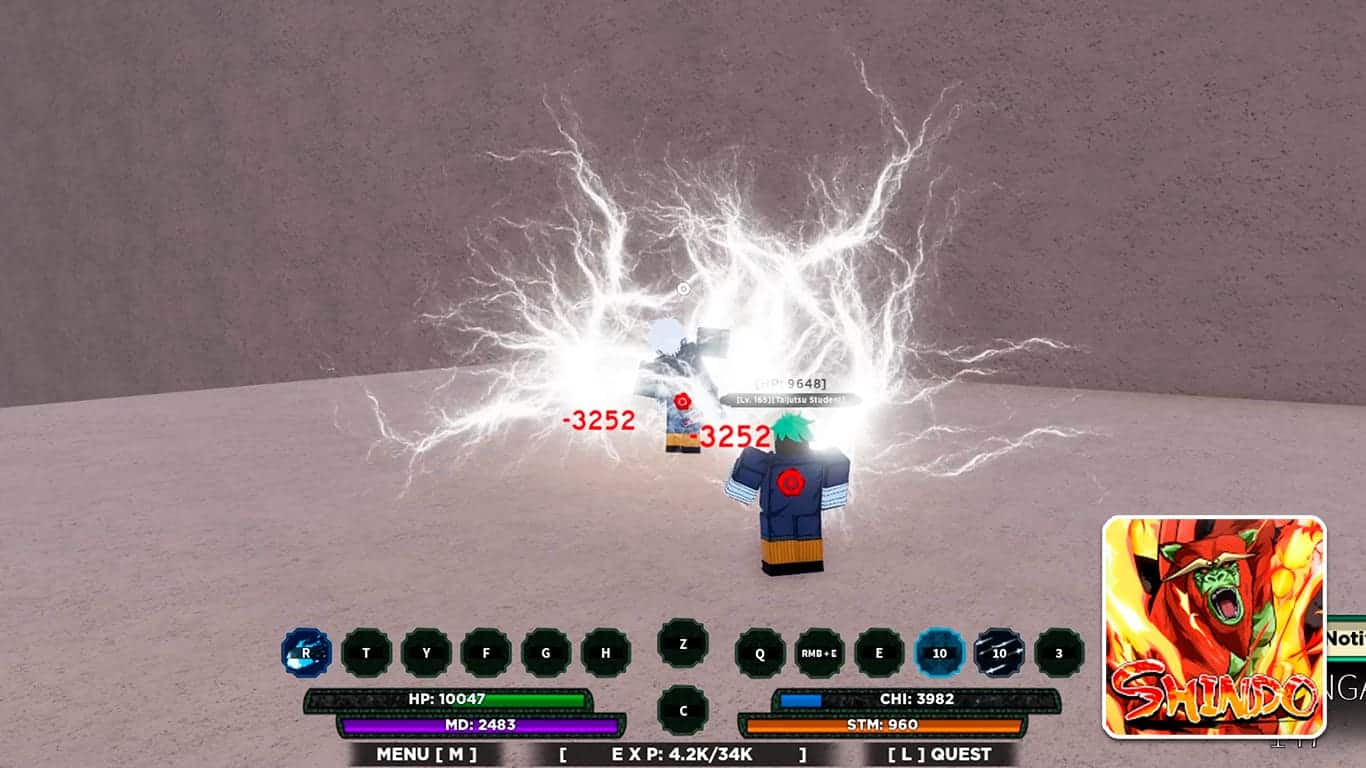 Leveling is essential in Shindo Life if you wish to become stronger.

By leveling up, you unlock new abilities and gain points to increase your stats.

There are several ways to level up in the game, some of which are faster than others.

Recommended Read: Shindo Life – How to Get Ramen For Hunger

In this guide, we give you the fastest way to level in Shindo Life so you can unlock better abilities, upgrade your stats, and become strong enough to fight bosses.

Be sure to check out our Shindo Life Codes List for spins that you can use to get better bloodlines and elements, both of which will help you level faster.

There are a couple of things we recommend you do to level up as fast as possible in Shindo Life.

Firstly, you should join the RELL World and RELL GAMES groups on Roblox, which are two groups made by the developer of Shindo Life.

By joining these two groups, you get both 2x daily rewards and 2x XP in Shindo Life, which makes you level up a whole lot faster.

Secondly, what setup of elements and bloodlines you have in Shindo Life makes a big difference in how powerful you are in the game, and the more powerful you are, the faster you can level up.

Acquiring elements or bloodline abilities that increase your movement speed and utility will also boost the rate at which you level up, as you can get to objectives faster.

Lastly, joining a squad of players, preferably players that are stronger than you, allows you to progress at a faster pace as well.

When members of your squad complete objectives, you also get XP.

By splitting up and delegating tasks, your group can complete objectives faster together than if you were to do it alone.

Leveling up alone can, however, also easily be done, and you will still level up fast training by yourself.

Fastest way to level up in Shindo Life

At the beginning of Shindo Life, the best way to level up is by hitting training logs, which are the wooden pillars located in cities.

You will quickly get a bunch of levels by hitting these.

As you level up, be sure to spend your stat points.

To level up at a quicker pace from training logs, be sure to put some points into Tai, as it will make your regular attacks deal more damage – making you earn more XP.

When you reach level 50+, hitting wooden logs is no longer the fastest way to level up in Shindo Life.

At this point, you should start doing the green scroll quests or story quests in the Leaf Village in Ember, which is the main city of the game.

The reason why you want to do these quests in the Leaf Village is that there is the shortest distance between enemies and quests.

All green scroll quests and story quests revolve around finding enemies outside the village and defeating them.

You can only have one active quest at a time, and upon defeating the required number of the specific type of enemy, the quest will automatically be completed, and you will receive the XP.

When you are defeating enemies for quests, you get XP as well from just dealing damage to them.

Because you are now doing quests and facing enemies, you want to start putting stat points into both Chi, Nin, and Health.

The reason why you want to start putting points in these is that you need more health to sustain enemies, and after reaching level 50, you should be able to unlock abilities from either your bloodline or element.

To unlock these, you need to have enough Chi, and for your abilities to deal more damage, you need Nin.

Having a powerful bloodline or element will help you a lot in defeating enemies.

Upon completing a quest, use the teleport feature in the menu to get back to the city quickly so you can grab another quest.

When you accept a quest from an NPC, you can see where the enemies you need to defeat are by looking at the red icon that appears on your screen.

Just turn around 360 degrees until you see the icon and then follow it.

As described in the previous paragraph, if you can find other players to train with by forming a squad, you can increase the number of missions you can complete per hour by splitting up and covering different parts around the city.

When you reach higher levels, you can start doing boss missions, which are the ones indicated by an orange scroll – they give a ton of XP.

What is max level in Shindo Life

The maximum level in Shindo Life is level 1000.

After you reach level 1000 in the game, you can rank up your character to further increase its power.

Once you’ve reached level 1000 in Shindo Life, you can use the ranking system to become stronger.

When you rank up, your level is reset back to level one, but you will now get extra stats when leveling up if you reached a new prestige level.

To reach the full potential of your character, you need to rank up a lot of times, which means you need to level up to level 1000 just as many times.

You will be able to level up faster the more times you rank up, though, as you get stat boosts and get to keep all your bloodlines, elements, weapons, etc.

The method explained above is the fastest way to level up in Shindo Life, but there are other great leveling methods as well if you get tired of grinding the same quests.

The War Mode is a game mode where you defend against waves of enemies.

You will get both rewards and XP from the game mode, but most of the XP will come from dealing damage to all the enemies that you have to defeat.

AFK farming is another popular way to level up in Shindo Life.

You are not going to level up that quickly if you are high level from this method, as it’s simply hitting training logs with auto-clicker software.

However, if you aren’t playing the game, are sleeping, etc., you can gain a lot of XP easily by keeping the game running with auto-clicker software.

That’s the fastest way to level up in Shindo Life!